Children have been the inspiration and impetus for the White House Easter Egg Roll since the first event in 1878. And in keeping with another tradition, first lady Melania Trump will be welcoming children on Monday to 1600 Pennsylvania Avenue.

But the first lady is incorporating her platform of helping American children by soliciting eggs from all 50 states this year from high school students rather than professional designers.

“I was really excited,” Spells said. “I feel my career is going somewhere. Nothing can stop me now. The president asked for this.”

“For the concept, Spells turned to the state animal (the white-tailed deer), the state flower (the mountain laurel) and the state tree (the hemlock). She used a topographical map of Pennsylvania as the inspiration for the shape of the antlers and incorporated the keystone symbol,” the Sentinel reported. 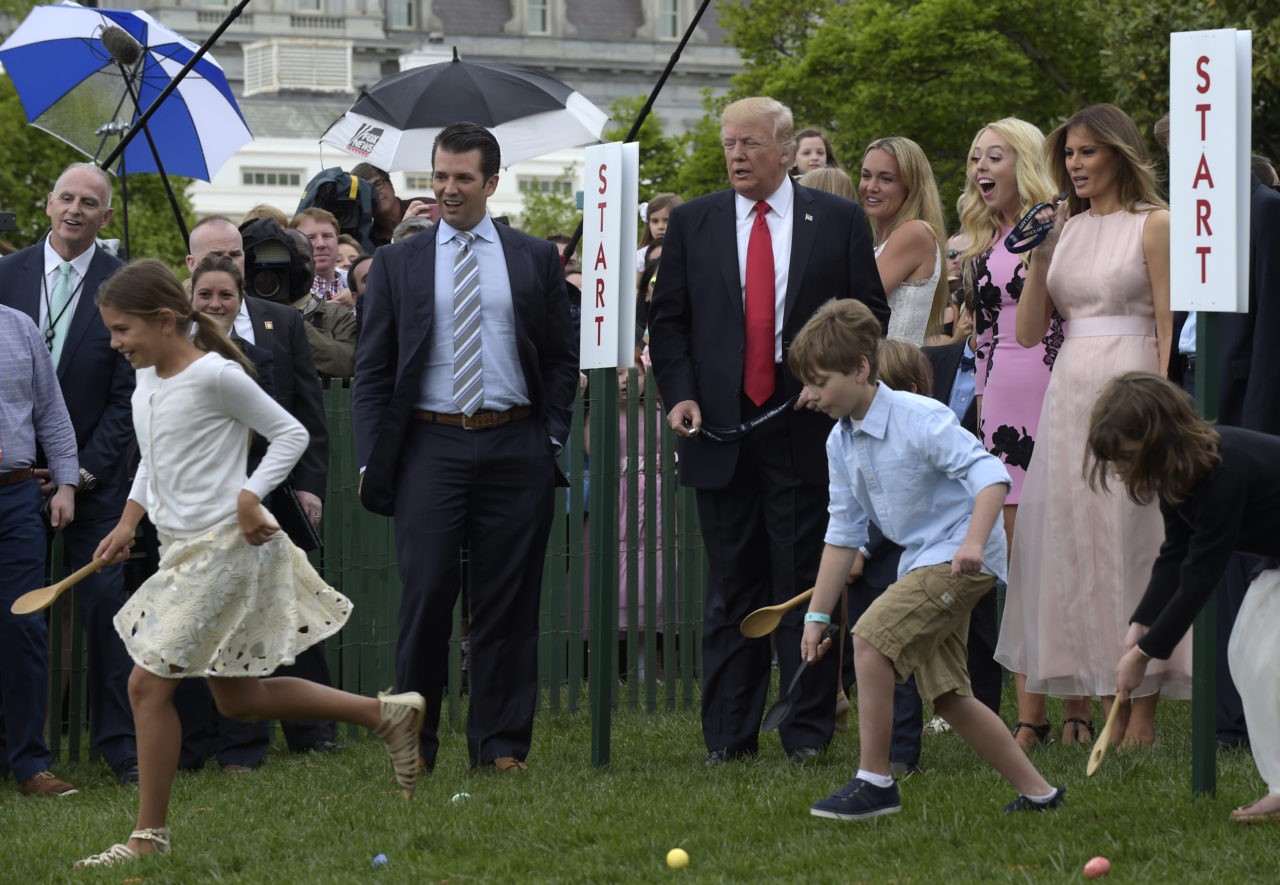 Trump’s idea is fitting for a tradition that started to entertain children and was, in fact, preserved by a few “bold” children whom, the White House said, ensured the roll has continued almost every year for more than a century.

The White House Easter Egg Roll officially dates back to 1878 and the presidency of Rutherford B. Hayes, but first-hand accounts suggest that informal festivities began with egg-rolling parties under President Abraham Lincoln.

Starting in the 1870s, Easter Monday celebrations on the U.S. Capitol’s west grounds grew so popular that President Ulysses S. Grant signed a bill that banned the rolling of eggs on Capitol grounds, citing landscape concerns.

In 1878, a group of bold children walked up to the White House gate, hoping to be allowed to play egg-rolling games there. President Hayes told his guards to let the children enter, and soon Easter Monday on the White House grounds became an annual tradition.

President Benjamin Harrison added music to the festivities in 1889 with the United States Marine Band.

The event became so popular that the number of participants had to be limited — a move that caused children to try to take charge again, according to the White House website.

“In 1939, the Secret Service had to go so far as shutting down a ‘racket’ of children trying to sneak adults into the event for a fee.”

The White House website said that, for the most part, the responsibility for the event has fallen to the first lady and often reflects her interests. 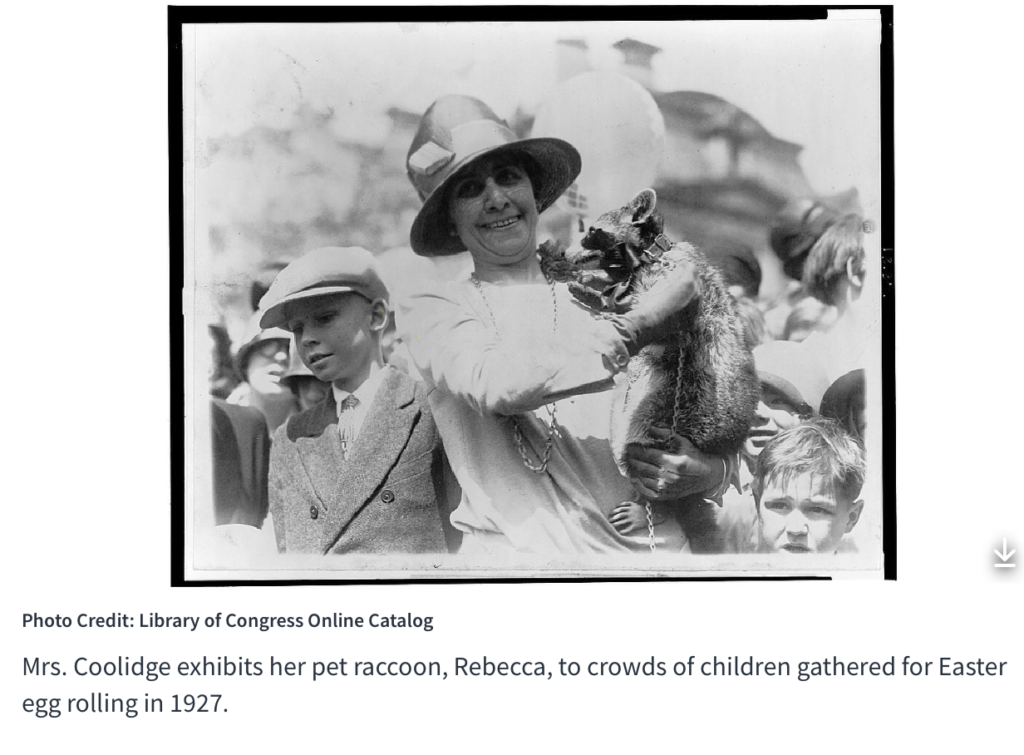 Food rationing and construction on the White House also prevented the event from 1946 to 1952. 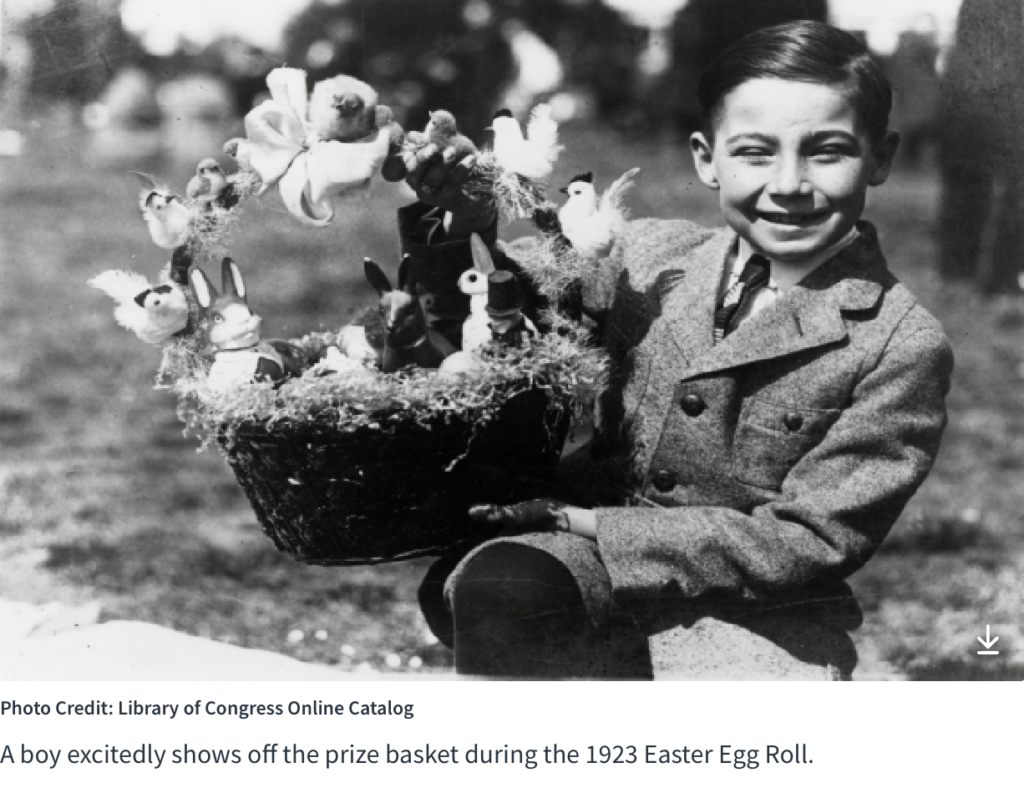 In 1981, first lady Nancy Reagan started the tradition of handing out an official White House Easter Egg to each guest as they departed.

Today, the general public can shop online for the White House egg and others items as well, including Easter baskets and a book on the history of the event. 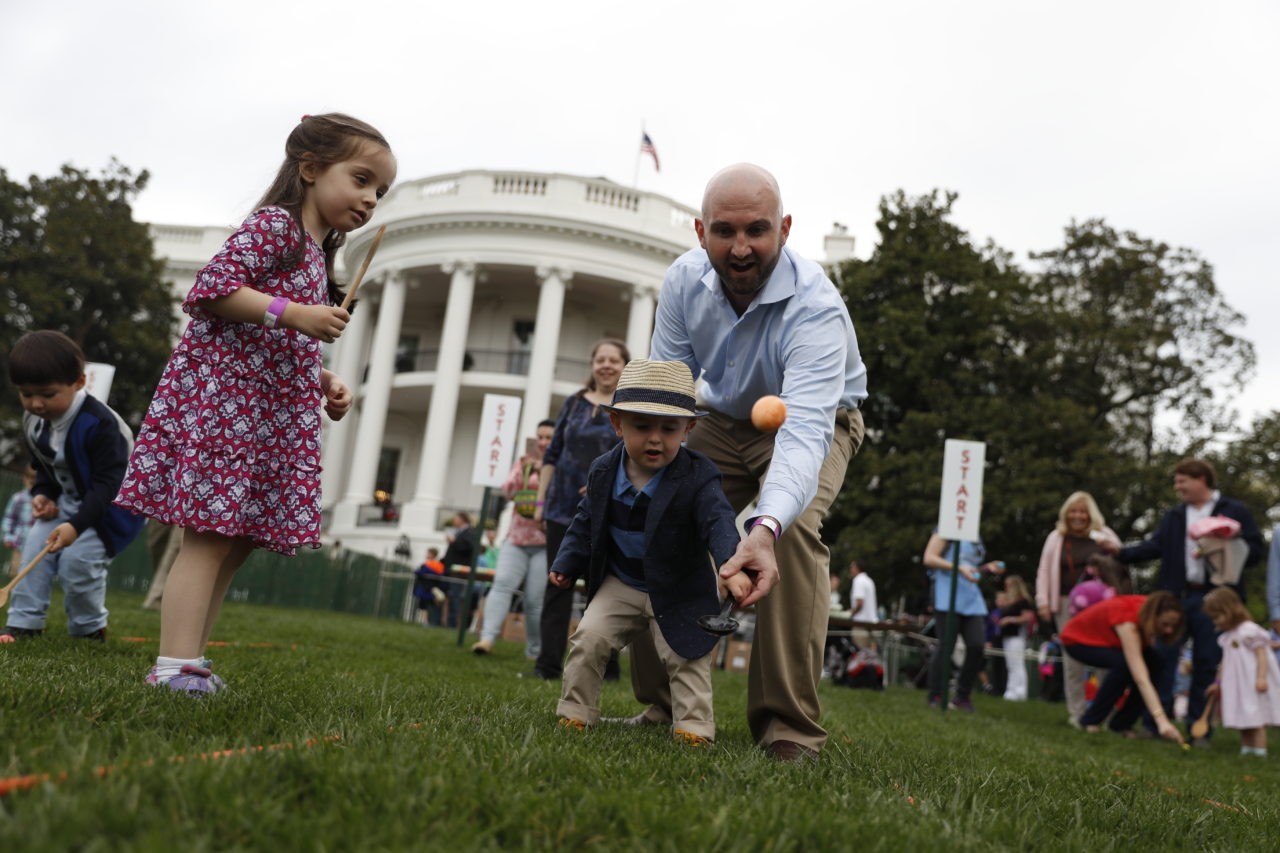 Another tradition has highlighted American egg farmers since the creation of the American Egg Board in 1977, and farmers across the country were asked to donate eggs for the roll.

Ross Dean, a second-generation farmer in Iowa, wrote fondly in the local newspaper about the Easter Egg roll as a beloved American tradition and one that puts the egg industry and its importance to the American diet in the spotlight. Dean wrote that he donated 30,000 “farm fresh eggs” for Monday’s event.

The federal recreation website states that Monday’s event is the biggest gathering to take place at the White House each year. 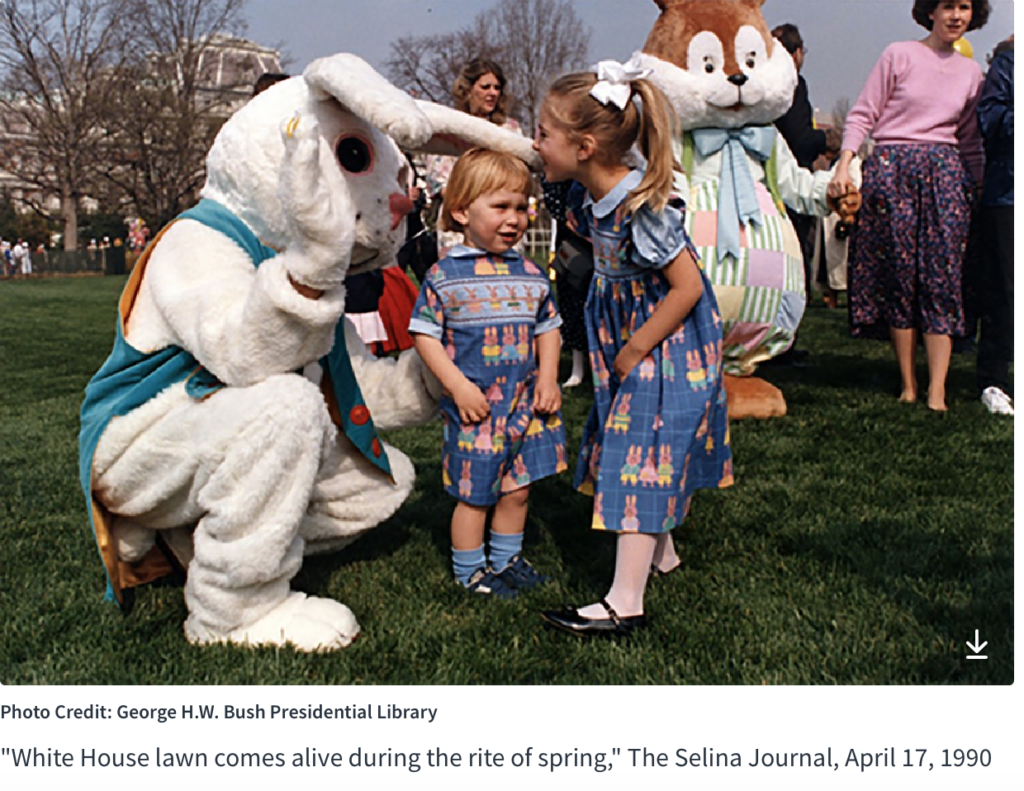 “Today, the Easter Egg Roll has grown from a few local children rolling eggs on the White House lawn to become the largest event held at the White House, filled with live entertainment, and, of course, the traditional rolling of the Easter eggs,” the website states, noting that the event is designed for children 13 and younger.

Children are chosen through a lottery system to attend the Easter Egg Roll, according to the White House. 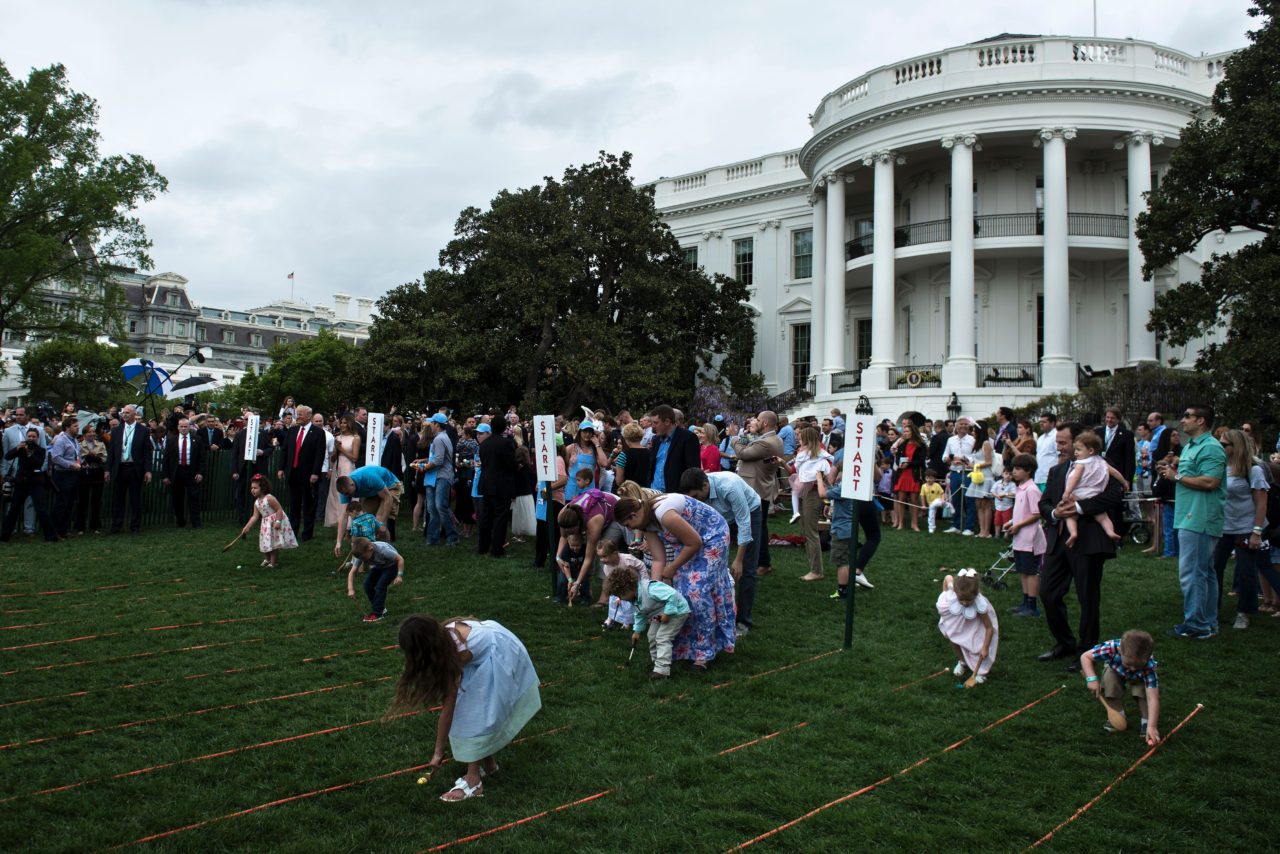 US President Donald Trump watches a race during the Easter Egg Roll on the South Lawn of the White House April 17, 2017 in Washington, DC. (BRENDAN SMIALOWSKI/AFP/Getty Images)