In June 2015, Breitbart News submerged, froze, and dragged the newly-introduced Glock 43. We then took it the range–without cleaning it–and shot it 105 times with only two misfeeds, both of which appeared to be due to the dirt and grit in the magazine chamber. 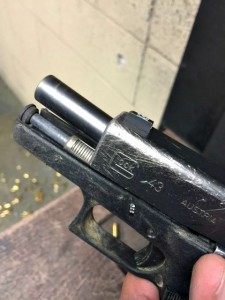 The result? We fired 350 rounds without one hiccup. To be fair, we thought we were going to have a hiccup on the second box of ammunition when we had one hard trigger pull–but even then the gun fired and continued to do so for the remaining 250 rounds with zero hiccups, misfeeds, or malfunctions.

Fastforward to April 2018, and our 43 still has not been cleaned, yet it continues to shoot round after round without complaint.

Did we drag it behind the Jeep until we seared the original sights off? Yes.

Did we get so much grit lodged in the gun that you could hear the sandy particles moving between the slide and frame when we worked the action? Yes.

Did that same grit make the trigger difficult to even pull at first? Yes.

But guess what? It shoots every time. We shot approximately 75 rounds through it on Tuesday morning and it never faltered.