Siena College officials are investigating a student for publicizing an email sent by a philosophy professor to voice hostility toward conservative students, whom she said make her “miserable.”

Zack Butler, a junior studying political science, posted 600 copies of an email from Professor Jennifer McErlean to an alumnus to express her animosity toward conservative students and her plans to protest a free speech event they are hosting. Conservative groups like Turning Point USA, which is organizing the conference, are “evil,” she wrote.

Curiously, but not unpredictably, instead of reprimanding the teacher for her blatant prejudice and discriminatory language, the college served Butler with a “Notice of Charges,” claiming that his publication of the email message adversely affected “the health, welfare, and/or safety” of campus community members “or the name and/or reputation of the College” as well as violating the school’s posting policy.

While Butler acknowledged his actions may have run counter to the school’s posting policy, he told The College Fix that being charged with adverse conduct was “what really bothered” him. He said the only reason he had decided to post the flyers was that the school authorities failed to respond to this incident or the broader climate of hostility against conservative students.

“As a conservative student, I was bothered not only by the email but also the response, or lack there of, by the administration and felt something had to be done,” Butler said in a Facebook post. 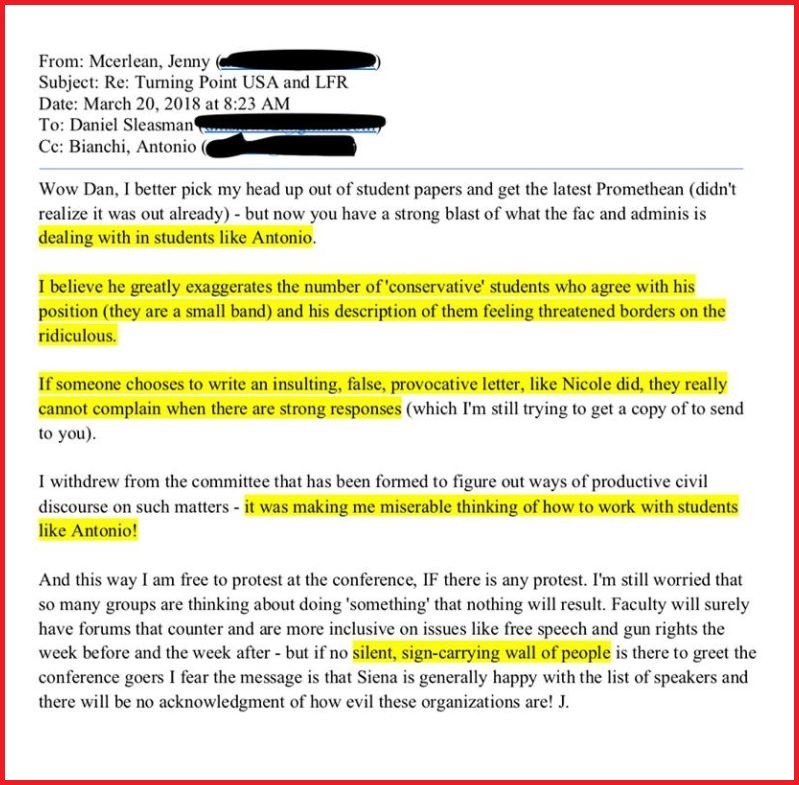 In response to the charges leveled against him, however, Butler said, “I could not imagine how my conduct of posting flyers with an email that was already made publicly available around campus adversely affected the school and local community.”

“I also thought it was ironic that they thought my posting of the flyers was more damaging to the reputation of the institution than the content of the email itself,” he added.

Now, Butler faces possible expulsion or suspension, depending on how the college administration chooses to handle his case.

In a scathing essay in defense of Zack Butler, another college student from New Jersey, Alex Cucciniello, wrote that the only individuals negatively affecting the campus community are “the intolerant academics and administrators” who foster “a hostile environment for students who don’t share their worldview.”

The free speech conference that so upset Professor McErlean is titled “Let Freedom Ring” and will take place on Sunday, April 15, as planned. The event features prominent conservatives such as James O’Keefe, founder of Project Veritas; Christian Ragosta of the National Rifle Association; and author and conservative commentator Roger Stone.