A century ago, millions of young Americans fought in the Great War, a conflict many today have nearly forgotten. More than a hundred thousand died, either from combat or from the influenza plague that accompanied the war, and more than two hundred thousand were wounded.

But one of the youngest casualties of the war doesn’t get counted in the official statistics. Sergeant Stubby was only a year or two old when he battled the Germans and was twice injured in combat. Far too young to enlist, he had to be smuggled inside another soldier’s coat to board the troop transport that took him across the Atlantic.

He fit inside the coat because he was a puppy, a brindle-colored Boston terrier mix who was the mascot of the 102nd Infantry.

Part of Sergeant Stubby’s story is retold in my best-selling new book, The Unknowns: The Untold Story of America’s Unknown Soldier and WWI’s Most Decorated Heroes Who Brought Him Home. Released in May, The Unknowns follows eight American heroes who accomplished extraordinary feats in some of the war’s most important battles. As a result of their bravery, these eight men were selected to serve as Body Bearers at the ceremony in which the Unknown Soldier was laid to rest at Arlington Cemetery.

When America entered World War I in April 1917, the United States had only around 214,000 men in the Regular Army and National Guard, far short of the millions it would need to fight. To make up the shortfall it drafted or enlisted four million men and sent them to various training camps around the country.

The 102nd Infantry trained in New Haven, Connecticut, on the grounds of Yale University, where they first met Stubby. The affable dog took a particular liking to Corporal Robert Conroy, who taught the terrier a number of tricks, including how to salute.

When it came time to ship out, Conroy couldn’t bear to leave Stubby behind, and against regulations, he secretly brought him on board. When Conroy’s superior officer found the dog, the precocious pup wisely saluted. Amused, the officer allowed Stubby to stay.

In Europe, Stubby experienced many of the same horrors as the men. He got his first taste of combat in the trench warfare near Chemin des Dames, France, in February 1918. While on the front lines, he fell victim to a mustard gas attack. After he recovered, his fellow soldiers fashioned him a specialized mask to protect him from the burning gas that often proved deadly. Stubby returned the favor by learning to detect both the smell of the toxic fumes and the far-off whine of incoming shells. His alerts saved many lives.

In April, he was with the rest of the 102nd outside the small town of Seicheprey when about 2,500 elite German stormtroopers that the Americans nicknamed “Hindenburg’s Traveling Circus” mounted a blistering raid on the Allied position. The raid was meant to deliver a severe blow to the Americans and damage their morale. The Germans first softened up the defense with 36 hours of non-stop artillery barrages. Then, fortified by a triple shot of rum in a blazing hot cup of tea, the stormtroopers of the Traveling Circus charged across no-man’s land and bounded into dugouts and trenches, slaughtering the Allied soldiers inside with flamethrowers, grenades, satchel charges, sharpened shovels, and trench knives. They snipped telephone wires as they went, preventing the men under attack from spreading word about the assault. 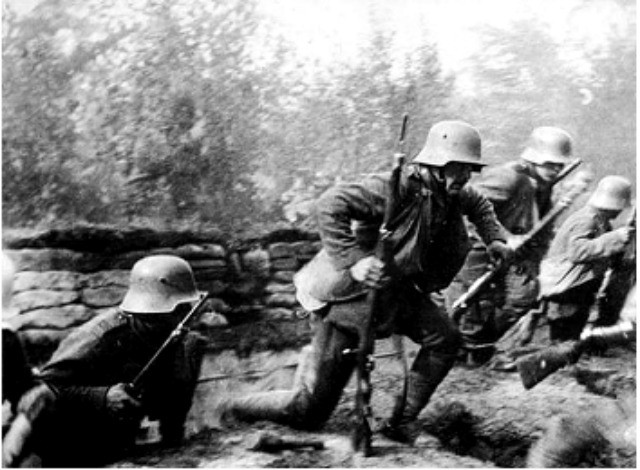 The Americans fought back violently with clubs, pistols, grenades, and anything else they could find. Even Stubby got into the action, ferociously tearing into enemy soldiers with his teeth.

Using infiltration tactics, the Germans penetrated deep behind the American lines and entered rear areas, including a field kitchen. The action grew so desperate that an American cook threw a pot of boiling water at a German flamethrower operator, snuffing out the flame, while another took out two stormtroopers with a meat cleaver.

Before the raid was over, the Germans would kill or injure around 650 Americans, including Stubby. Shrapnel from an enemy grenade tore through his foreleg. Like the other wounded soldiers, Stubby was sent to the rear to recover. His presence in the field hospital was therapeutic for the other injured men, and morale improved greatly while he was there.

He returned to the front, and legend says that he was promoted to the rank of sergeant after capturing a German spy. He later participated in the battle to retake the French town of Château-Thierry. The female residents of the town were so delighted by the young terrier that they made him a special coat, on which he wore his wound chevron, and later, his many medals. Before the war was over, he would again be injured by a grenade, this time in the chest and leg, but he again recovered.

Taking a dog on board the ship heading back to America was just as contrary to regulations as bringing him to France had been, but when the war ended, Conroy again smuggled his beloved terrier aboard. Back in the states, Sergeant Stubby received a hero’s welcome. Cities across the country clamored for him to lead their parades, and he received numerous decorations, including a gold medal presented by General John J. Pershing, the commander of the U.S. forces in Europe.

When Conroy attended Georgetown University Law School, Stubby went too. The Hoyas made the dog their mascot, just as the 102nd had.

Stubby died in his sleep in 1926, but his body was preserved by a taxidermist and given to the Smithsonian Institution. His obituary ran in newspapers all across the country, including in The New York Times, which dedicated an entire half-page to the lovable mutt. His portrait was placed on display at the West Haven Military Museum in Connecticut, and he was the subject of a 2018 animated feature film.

Today, Sergeant Stubby serves as a reminder of the heroism of the American doughboys, a forgotten generation who served valiantly in a nearly forgotten war. In the crucible of battle, ordinary Americans — both human and canine — were forged into daring fighters who took wounds, recovered, and returned to fight again. One hundred years after their service, there could be no more fitting time to remember Sergeant Stubby and all the brave men and women who answered the call of their country.

Patrick K. O’Donnell is a bestselling, critically acclaimed military historian and an expert on elite units. He is the author of eleven books. The Unknowns is his newest, released in May. O’Donnell served as a combat historian in a Marine rifle platoon during the Battle of Fallujah and speaks often on espionage, special operations, and counterinsurgency. He has provided historical consulting for DreamWorks’ award-winning miniseries Band of Brothers and for documentaries produced by the BBC, the History Channel, and Discovery. PatrickkODonnell.com @combathistorian