Every American generation is unique, but today’s media hardly ever mention the Doughboy generation of a hundred years ago. Most of us have forgotten that average Americans, many of them poorly trained and using inadequate equipment, helped defeat one of the greatest armies in the world at the time — the German Army.

Time and time again, the Doughboy generation overcame seemingly impossible odds through grit and innovation. A microcosm of that war and that generation was evident at the unknown battle at Gesnes, France, where the 362nd Regiment of the 91st Division charged into the heart of German defenses in the Meuse-Argonne.

In the fall of 1918, Harry Taylor and the other soldiers of the 91st looked out across a barren field toward Gesnes. The Germans had turned the small French hamlet into a seemingly impregnable stronghold. They had bored deep underground, creating a subterranean labyrinth of tunnels and bunkers where they would be safe from most artillery rounds. And they had strategically placed machine guns so that overlapping fields of fire covered every square inch of the approach.

But the 91st had its orders: to attack Gesnes “with utmost vigor and regardless of cost.”

The veterans among them, including Taylor, knew that traversing more than a mile in full view of the Germans to then attack an entrenched enemy on the high ground was suicide. One of the officers whispered what everyone was thinking: “It’s impossible. Our losses will be terrible.”

His superior replied aloud, “The hell with the losses — read the order!”

The story of that suicidal charge at Gesnes is retold in my new best-selling book, The Unknowns: The Untold Story of America’s Unknown Soldier and WWI’s Most Decorated Heroes Who Brought Him Home. Recently released, The Unknowns follows eight American heroes who accomplished extraordinary feats in some of the war’s most important battles. As a result of their bravery, these eight men were selected to serve as Body Bearers at the ceremony where the Unknown Soldier was laid to rest at Arlington Cemetery.

One of the Body Bearers was Harry Taylor, a cowboy who had enlisted as a young man in Fort Yellowstone, Wyoming. By the time America entered the Great War, the five-foot-ten cavalryman had earned a reputation as a model soldier, crack shot and, somewhat anachronistically in the age of the machine gun, an expert with the saber.

Before shipping him over to Europe, the Army assigned Taylor to the 91st, also known as the “Wild West Division.” Western farmers, loggers, ranchers, cowboys, and even a few filmmakers from Hollywood formed the backbone of the 91st. In an era when no one had heard of “toxic masculinity,” the 91st “gave many citizens, especially in the East, a better conception of the high quality of manhood the West was contributing to the United States Army.” Taylor served in headquarters troop, where he could use his horsemanship skills to perform recon and quickly move among the various units in the division.

As a long-time veteran, Taylor understood that he was heading into a bloodbath at Gesnes. Colonel John Henry “Gatling Gun” Parker, who had earned his nickname at the Battle of San Juan Hill in the Spanish-American War, noted that the ground was “double enfiladed by machine guns and subject to the highest concentration of [German] artillery fire I have ever seen.” At six-foot-three, the pipe-smoking Parker had a commanding battlefield presence and a reputation for “brandishing a cane like a young sapling and swearing like a trooper.” He argued strenuously against the charge he had been ordered to lead, saying, “The position can be taken, but only if it is desired to pay the price, which will be very severe losses.”

But his words fell on deaf ears. The regiment would attack.

The situation heading into the battle was made worse by the fact that the men were already near their physical limits. Kept awake by German shelling and gas alarms, many of the Americans had not slept for 36 hours straight. And they had brought very little food and water with them; some were on the brink of starvation.

Still, as sunlight filtered through the slate-gray clouds and the husks of nearby trees, the Wild Westerners gripped their weapons and lined up to charge. At 3:40 p.m. the officers blew their whistles, and Taylor and the others surged ahead, yelling a cowboy motto: “Powder River! Let ‘er buck!”

Lieutenant Farley Granger, one of the officers on the scene, later described the sight of the men charging toward Gesnes:

“Perhaps the charge of the Light Brigade was more spectacular, more melodramatic and picturesque, but not more gallant. It is one thing to ride knee to knee in wild delirium of a cavalry charge under the eyes of armies; it is something else to plod doggedly on, so widely scattered as to seem alone over a barren hillside against an unseen enemy’s invisible death singing its weird croon as it lurked in the air and stinging swiftly on every side. Man after man fell, but the others continued on through a ‘hell’ of shrapnel and machine-gun fire as would be impossible to exceed.”

Entire columns of men in olive drab fell, vaporized in a spray of blood and gore as artillery and machine guns did their work. Their bodies carpeted the ground; many of them so shattered that they would never again be identified.

A tank rumbled across the field, and Granger and the others saw an opportunity. Swarming up the sides of the vehicle, they opened the hatch and shot the German crew inside. They then climbed down into the blood-drenched compartment and turned the tank’s guns on the Germans at Gesnes.

It took more than an hour, but somehow, small groups of men eventually made their way to Gesnes and began the work of clearing the town. Gatling Gun Parker later said that he said saw so many examples of gallantry that it was difficult to single out the men who were worthy of medals. One man who was singled out was Taylor, who received a Citation Star (later known as the Silver Star) for valor. Several other men were awarded Medals of Honor.

The 91st accomplished its objective, but as Parker had expected, the price was horrific. Parker himself never made it to the town. Wounded multiple times, he lay near death in a shell hole five hundred yards in front of Gesnes but continued giving orders. Similarly, Lieutenant Granger left the field with a machine-gun bullet in his ankle, plus four bullet holes in his coat and one in his canteen. 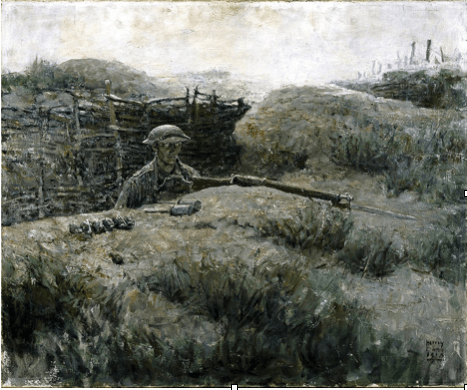 Those that made it to the town immediately set about looking for food. A small group discovered a cabbage patch and gorged themselves “in the same variety of enjoyment that we would have had, if it been Crab Louie. We ate in the dark, eating cabbages, dirt, and worms, but how good it tasted.”

As night fell, the temperature dropped, and the men, suffering from lack of food and water and loss of blood, began shaking. Exhausted after several days of combat, some men caught a few minutes of sleep next to the corpses of their friends.

Their units had been decimated. Companies that began the previous day with 200 men now had only a handful left — just 18 in one case, although a few had as many as 75.

As they struggled to organize themselves, the unit received new orders: withdraw.

The elements of the 91st that had taken Gesnes had moved faster than the units on their flanks, and one of those American units collapsed under a enemy counterattack.

As a result, they were now in danger of being enveloped by the Germans. They were moving back — all the way to the position where they had started their suicidal charge. The entire assault had been for naught.

The experience of that retreat was seared into the minds of the Wild Westerners.

“Everyone in our sad little procession was carrying or helping carry a wounded man. It was quite cold with a strong wind blowing rain in our faces,” recalled one member of the 91st. “We stumbled along, floundering through shell holes and every now and then picking up wounded men who had not been brought off the field…. Many times the stretchers gave way and the stretcher-bearers stumbled and fell. The wounded would groan and curse, and the column would halt until they were ready to move forward again.”

Granger was struck by the men’s remarkable mindset in the face of such unbearable tragedy. “Never have men displayed a greater devotion to duty,” he said. “That is why a regiment without complete equipment or training could defeat such troops as the elite Prussian Guards, overcame positions of noted strength and still advanced, often without officers, after losing in a few minutes over 50 percent in casualties; the offensive spirit, the will to win, the fitness to win, in a word, the morale was such, the personnel was such, that victory was possible despite the greatest handicap.”

Although he had lost many of his close friends, Granger didn’t consider himself a victim and instead found something inspiring in his experience. He later remarkably wrote, “I want to live those days again; to see the bursting shells and hear them whistling for their victims; hear the frantic cries of ‘gas!’ ‘cover!’ ‘medic!’ ‘Raise the artillery!’ I want to go back to France once more—not to seek new joys or thrills, but to revive the dreams of old that are fading with the years.”

As with many combat veterans, part of Granger’s spirit remained in France.

Granger, Taylor, and the vast majority of Doughboys of World War I answered a call and served unswervingly despite overwhelming odds. One wonders how this current generation, not counting those already serving in the military, would respond.

Patrick K. O’Donnell is a bestselling, critically acclaimed military historian and an expert on elite units. He is the author of eleven books. The Unknowns is his newest, and it is featured in Barnes & Noble stores. O’Donnell served as a combat historian in a Marine rifle platoon during the Battle of Fallujah and speaks often on espionage, special operations, and counterinsurgency. He has provided historical consulting for DreamWorks’ award-winning miniseries Band of Brothers and for documentaries produced by the BBC, the History Channel, and Discovery. PatrickkODonnell.com @combathistorian