A Trump administration federal government reform plan seeks to merge the Departments of Education and Labor as a means to fulfill President Donald Trump’s executive order to make the federal government more “efficient, effective and accountable.”

The Trump administration states the newly formed department would be “charged with meeting the needs of American students and workers from education and skill development to workplace protection to retirement security.”

According to the plan:

Merging ED [Education Department] and DOL [Department of Labor] would allow the Federal Government to address the educational and skill needs of American students and workers in a coordinated way, eliminating duplication of effort between the two agencies and maximizing the effectiveness of skill-building efforts.

All of the existing ED and DOL programs would merge into a single department that would consist of four “sub-agencies” that focus on 1) K-12; 2) Higher Education/Workforce Development; 3) Enforcement; and 4) Research/Evaluation/Administration.

The administration provides the following organizational chart of the merged DEW with summaries of the focus of each “sub-agency”: 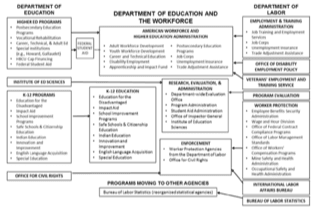 The K-12 agency would support State and local educational agencies to improve the achievement of preschool, elementary, and secondary school students, including students with disabilities, Native American students, and English language learners.

The new American Workforce and Higher Education Administration (AWHEA) would be charged with ensuring that American workers possess the skills necessary to succeed in the workforce.

The Enforcement agency would include worker protection agencies from DOL that are responsible for enforcing statutes relating to workers’ pay, safety, benefits, and other protections, as well as Federal workers’ compensation programs.

The Research, Evaluation, and Administration agency would include centralized offices focused on policy development, research, and evaluation, in addition to management-focused offices related to IT, procurement, financial management, and budgeting.

The administration says it hopes to “create alignment throughout the education-to-career pipeline, while also creating coherence within the workforce development and higher education worlds.”

The proposal to merge the two federal departments will need congressional approval, but – just in its first day of public review – the plan already has drawn criticism from those on the right and the left.

In a statement about the plan, Secretary of Education Betsy DeVos said the proposal was one that would fulfill Trump’s “promise to reduce the federal footprint in education and to make the federal government more efficient and effective.”

“Artificial barriers between education and workforce programs have existed for far too long,” DeVos continued. “We must reform our 20th century federal agencies to meet the challenges of the 21st century.”

According to Education Week, Sen. Patty Murray, a Democrat from Washington and the ranking member of the Senate Health, Education, Labor, and Pensions Committee, referred to the proposal as “unrealistic, unhelpful, and futile.”

“The proposed Department of Education and the Workforce is recognition of the clear relationship between education policy at every level and the needs of the growing American workforce,” she said.

It is precisely, however, because the plan creates an “education-to-career pipeline” and seeks to achieve “workforce development” as its goal that many in the conservative base of the Republican party say it is not in keeping with what Trump campaigned on in 2016.

During his presidential campaign, Trump consistently told parents he would end Common Core and work to eliminate the federal Education Department, returning education policy to the states where the Constitution intended it.

“Rather than returning government to the people as the president promised, it centralizes government,” she said. “It codifies the Common Core-type workforce development model of job training, rather than genuine education, and gives Big Business outsized influence on what happens in schools. It promotes data sharing and citizen tracking for the benefit of a government-managed economy. It’s a mess. We can only hope Congress rejects it outright.”

In an interview with Breitbart News, Eunie Smith, president of the Eagle Forum, said the administration’s proposal is mind-boggling in its apparent acceptance that it is the role of the federal government to plan the workforce.

Smith said the proposal is a “Jeb Bush-type plan” that suggests “the only purpose of education is to prepare a citizen for a slot in the workforce.”

“Rather than equip an individual to pursue whatever goal he sets for himself as part of his God-given freedom, this is, instead, the German model being pushed by misguided business interests and some state interests,” she explained. “As a result, the type of education an individual would receive would be influenced by crony corporations dictating to schools the skills needed for future workers.”

Republican Rep. Thomas Massie of Kentucky is the author of a one-sentence bill introduced last year that would end the federal Education Department on December 31, 2018. Though he still supports a complete end to the department, he told Breitbart News the administration’s proposal could be a step in the right direction:

I introduced HR 899 to eliminate the federal Dept. of Education, but President Trump’s new proposal to merge the Dept….

“What my bill doesn’t speak to is what do you do with all those functions of the Education Department,” he explained. “While I would prefer to devolve them to the states, instead of keeping it at the federal level, one of the options I have presented is to transfer those functions that we deem essential to other departments.”

Massie said, for example, Project Head Start, the early childhood program, is part of the Department of Health and Human Services – not the Education Department. The School Lunch Program, he added, is housed at the Department of Agriculture.

“I think the plan is a step in the right direction if it creates a smaller bureaucracy,” he continued, still acknowledging the validity of concerns that the proposal may not return control of education to parents and localities, or that it may further a federal role in planning the workforce.

The congressman observed, however, that the current education system has also been “geared in the wrong direction for a long time, in that there’s this notion that most people should go get a four-year degree in liberal arts and that this will guarantee a bright future, when, in fact, they really should be getting ready for the job market.”

“Not everybody is served by getting a four-year degree along with $200,000 in debt,” Massie said. “I think catering to corporations is a valid concern, but I also think the pendulum is too far in the other direction now with students not being prepared for the job market. I’d prefer preparing students to have skills and work for corporations than to trying to shape their ideology and social beliefs in college.”

“Considering that the words ‘local control,’ ‘parent,’ and ‘teacher’ do not appear a single time in the proposal, it looks like the authors of the report couldn’t have cared less about President Trump fulfilling his campaign promises to American families,” she said. “Perhaps the focus of any reorganization should be on his education advisers.”