The two men who founded Ben and Jerry’s ice cream company – known for its leftist activism – were in Washington, DC, on Tuesday to announce the new “Pecan Resist” flavor mocking President Donald Trump and stating at the event that Trump “must be stopped.” 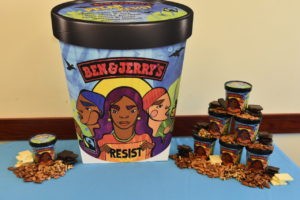 Ben Cohen and Jerry Greenfield were joined at the National Press Club by other leftist activists, including Color of Change, Honor the Earth, NETA and the anti-Israel activist Linda Sarsour, co-founder of the anti-Trump Women’s March.

“In 40 years Ben and Jerry’s has never spoken out against the president of the United States and we do not do so lightly today,” Cohen said. “But these are not normal times.” 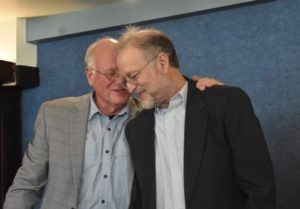 “This is the most unAmerican president in my lifetime,” Cohen said.

Cohen said the company was “unendorsing” Trump and accused him of encouraging anti-semitism and racism.

“When hate and indifference to suffering pour forth from the mouth of the president,” Cohen said. “When winks and nods to people who hate others for their race or their gender identity are the norm.”

“When violent behavior is condoned and encouraged, it sets a national tenor of intolerance, divisiveness, indifference, hate, and violence,” Cohen said. 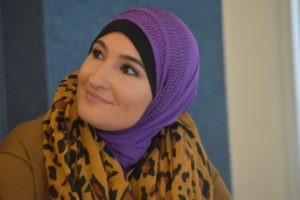 “Today in America under this president white supremacists are good people,” Cohen said.

Cohen called Trump a liar and said his calling out fake news is “a threat to our security and our way of life.”

“So is it right for an ice cream company to criticize the president?” Cohen asked.

His answer was calling for the president to be “stopped.”

“The only national emergency today is in the White House,” Cohen said.

A giant replica of the new ice cream flavor packaging was unveiled, and the artist/activist who designed the containers said she wanted it to feature “women of color” and that one of the women with a headscarf was included to honor Sarsour. 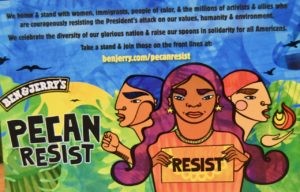 Ben and Jerry’s Facebook page features a video of the press conference and the announcement of the new flavor:

Today we launch Pecan Resist! This flavor supports groups creating a more just and equitable nation for us all, and who are fighting President Trump’s regressive agenda.

We cannot be silent in the face of the President’s policies that attack and attempt to roll back decades of progress on racial and gender equity, climate change, LGBTQ rights, and refugee and immigrant rights – all issues that have been at the core of our social mission for 40 years.

Attendees were offered free samples of the new flavor and postcards were distributed that said: “We honor and stand with women, immigrants, people of color, and the millions of activists who are courageously resisting the president attack on our values, humanity, and environment.”

“We celebrate the diversity of our glorious nation and raise our spoons in solidarity to all Americans.”