Twitter suspended an account linked to the domestic terrorist Antifa movement after it posted the personal address of Fox News host Tucker Carlson, and encouraged a harassment mob at his house. However, a second Antifa-linked account that posted the addresses of Carlson, along with Sean Hannity, Ann Coulter, and Daily Caller co-founder Neil Patel, has yet to be suspended.

The first Twitter account, “Smash Racism DC,” published a number of tweets encouraging the far-left mob that descended on Tucker Carlson’s home in Washington D.C. earlier tonight. Per Gateway Pundit, an individual affiliated with DC Antifa said the mob harassment of Carlson was “just the beginning.”

The SmashRacismDC account briefly posted a picture featuring the street address of Carlson’s house, although this was taken down after media publications including Breitbart News reached out to Twitter for comment. SmashRacismDC was subsequently banned by Twitter.

However, another Antifa-affiliated account has since begun spreading Carlson’s address, along with the addresses of Sean Hannity, Ann Coulter, and Daily Caller co-founder Neil Patel. This account has yet to be suspended or banned by Twitter, although the tweet containing a link to the conservative personalities’ addresses has been taken down. 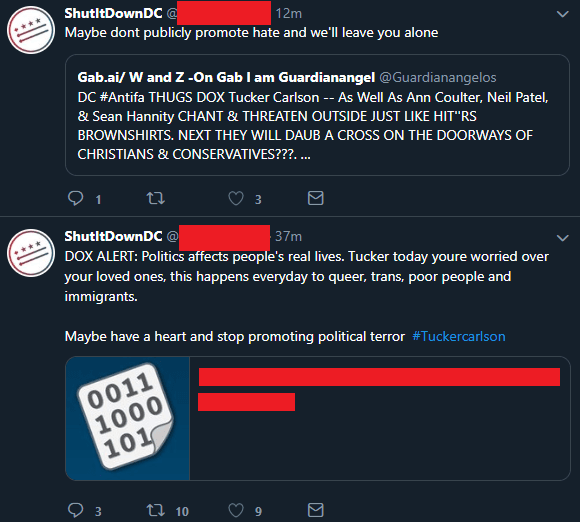 Per The Hill’s Joe Concha, the Antifa mob celebrated by both accounts had forced Tucker Carlson’s wife to hide in the pantry inside their home until police arrived.

Earlier Wed. night, a mob had converged on the home of Fox News host Tucker Carlson, forcing his wife home alone at the time to hide in a pantry until police arrived. https://t.co/IcTGXwCHwv

Before its ban, the SmashRacismDC account featured a pinned tweet celebrating the mob that chased recently re-elected Senator Ted Cruz (R-TX) out of a restaurant amid the Kavanaugh hearings. Other tweets from the account celebrate Antifa, a movement notorious for engaging in acts of violence against conservatives and Trump supporters, including a planned acid attack in 2017.

Twitter apparently saw no problem with either tweet. The first was allowed to remain on the platform for over a month, and the second for over a week. Twitter only took action against the account after the doxing of Tucker Carlson.

U.S. security agencies have categorized the Antifa movement as domestic terrorists. Twitter, which claims to take a zero-tolerance approach against the use of its platform to encourage violence, has yet to ban or suspend SmashRacismDC, nor ask its owner to remove its tweets supporting a domestic terrorist group.

Despite banning InfoWars host Alex Jones for alleged “offsite harassment” (the “harassment” was little more than Jones insulting a CNN reporter), SmashRacismDC was allowed to keep their post celebrating the harassment of Sen. Cruz on the platform.

In addition to its failure to speedily sanction accounts encouraging in-person mob harassment against conservatives, Twitter has also verified far-left accounts like the Sleeping Giants, a group whose modus operandi is to spread smears about conservative media outlets (including Breitbart News) to advertisers in a bid to censor them by undercutting their revenue. By verifying these accounts, Twitter gives them an official stamp of approval.