Despite dire predictions of a necessary increase in severe weather events due to climate change, 2018 is poised to become the first year on record with no violent tornadoes in the United States, the Washington Post reported.

According to Post weather writer Ian Livingston, while record-breaking, 2018 is not altogether exceptional, since “there have been downtrends in violent tornado numbers both across the entire modern period, and when looking at just the period since Doppler radar was fully implemented across the country in the mid-1990s.” 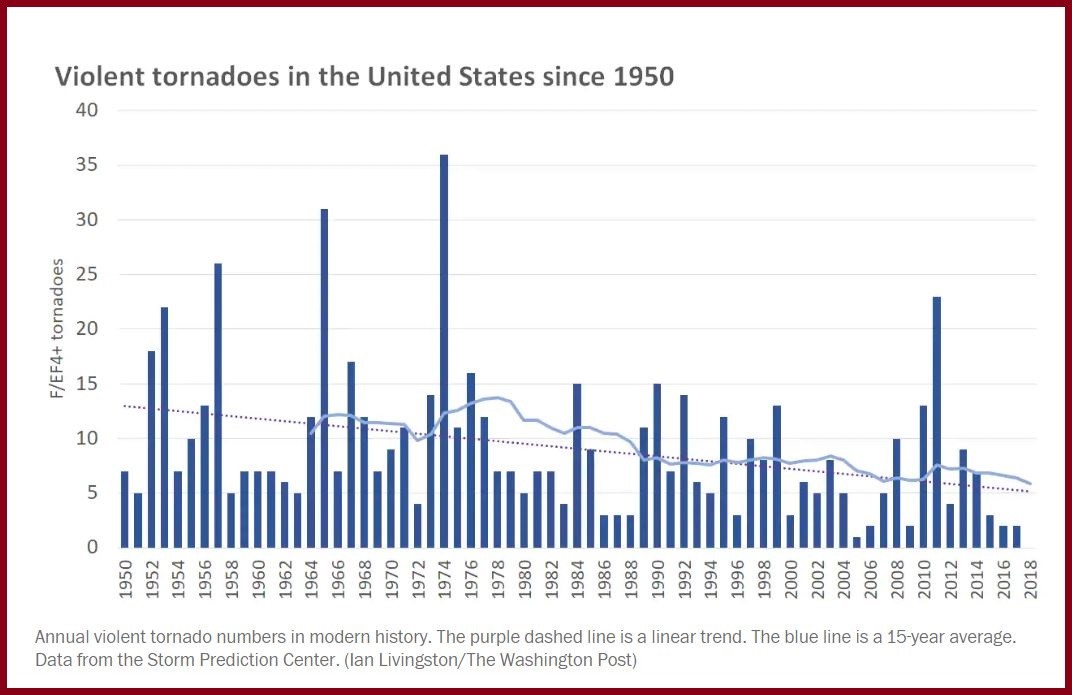 Violent tornadoes by year since 1950

The year will not only set a record for zero “violent” tornadoes — those ranked EF4 or EF5 on a 5-point scale — but will likely also set a record for the fewest “intense” tornadoes (F/EF3+). With just three days to go, 2018 has seen only 12 intense tornadoes in the U.S., three fewer than the record-holding year of 1987, which had 15.

Unsurprisingly, the number of tornado deaths in 2018 is also remarkably low at ten and could also turn out to be a record.

Climate alarmists will have to scramble to explain to the public how the declining number of intense tornadoes is really caused by global warming, which they will undoubtedly do.

In past years, everything from cold winters to warm summers were blamed on climate change — everyone’s favorite whipping boy — and this latest phenomenon should prove no different.

In 2015, Susan Rice suggested that climate change was partially responsible for the war in Syria and Venezuelan Vice President Jorge Arreaza blamed government-imposed energy rations on climate change as well.

In 2017, extremely cold temperatures in vineyards of western New York state were attributed to climate change, while in 2018 Nigerian President Muhammadu Buhari’s administration argued that “climate change” is the driving force behind the massacre of thousands of predominantly Christian farmers at the hands of Fulani herdsmen.

In September, climate prophet Al Gore told fans in San Francisco that watching the nightly news “is like a nature hike through the Book of Revelation” as severe climate events become a daily affair.

Not to be outdone, California Gov. Jerry Brown, an “evangelist” for global warming, blamed climate change for California wildfires, adding that climate skeptics were responsible for the deaths of California residents.

“Managing all the forests in everywhere we can does not stop climate change,” he said. “And those who deny that are definitely contributing to the tragedies that we’re now witnessing, and will continue to witness in the coming years,” he said.