From obsessing over the details of President Trump’s genitals, to unhinged Hitler comparisons, to bullying Kanye West, CNN had another wild year, and we’re here to help remember all their best moments.

While there’s plenty of news to go around in the age of President Trump, CNN still hasn’t had a great year in the ratings, so if you weren’t watching, here are the top seven embarrassing moments from CNN in 2018.

In one of the stranger moments for the network, Chris Cuomo and Don Lemon shared a kiss on air after attacking White House press secretary Sarah Sanders for her response to a threat made against the network’s New York office. 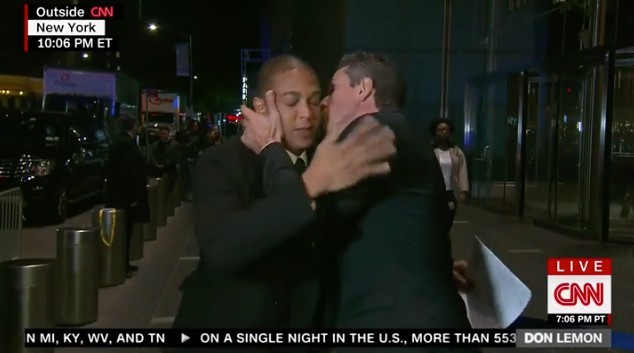 6. CNN Harasses Old Woman Leading to Violent Threats Against Her

In February, reporter Drew Griffin tracked down a woman in Florida who ran a pro-Trump Facebook page that CNN said “unwittingly promoted a Russian-coordinated event on Facebook.”

A Florida woman who ran a Trump supporters page that unwittingly promoted a Russian-coordinated event on Facebook says she doesn’t believe that she was influenced by Kremlin-linked trolls https://t.co/DmgDRFRwyn pic.twitter.com/OAz5julCyA

Following the report, the woman then received a barrage of harassment and threats on social media.

CNN published her name — it’s so unique it’s the only one that pops up on FB. I’m not doxxing her & I won’t show her profile page, but let’s take a look at the comment section of her recent FB posts — first up a baby vid. If Russia wanted division, they got it. Nice job, @CNN. 2/ pic.twitter.com/DlndyU3Sko

Just wonderful @CNN. Give yourselves a hand. Again — Russia wanted Americans turned against Americans? They wanted to sow chaos? They wanted to create division? Look at what a news report doxxing an old lady’s Facebook page results in. Vicious. Vile. Senseless. Uncharitable. 4/ pic.twitter.com/XFh1ffla7p

No seriously @CNN — did you consider the possibility that in exposing an old lady supposedly being tricked by Russian trolls on Facebook dot com that you would be sending waves of ***American*** trolls to call her a traitor, attack her appearance, & threaten her with violence? 5/ pic.twitter.com/vNbSMgYVqR

One social media user taunted her, telling her, “come to NY and I’ll kick your Russian bot ass!”

Another Facebook user called her a “stupid stupid, bitter old Hag” who should “be arrested and tried for treason.”

Even left-wing commentators were uncomfortable with the report. MSNBC’s Chris Hayes said, “I think it’s bad CNN did this and don’t approve and wouldn’t do it myself.”

“That is awful and they should not have done it. In fact the video came up in our editorial meeting and I said we are definitely not showing it. Doorknocking a random citizen not accused of any wrongdoing like that is not cool,” he also said.

That is awful and they should not have done it. In fact the video came up in our editorial meeting and I said we are definitely not showing it. Doorknocking a random citizen not accused of any wrongdoing like that is not cool.

The network really showed its colors in October after Kanye West visited the White House and in an impassioned monologue, showed support for President Trump, attacked liberal orthodoxy, and made CNN very, very upset.

Last night on @CNN, Kanye West was called a “token negro” and a “dumb negro”.

I want you guys to imagine if those words were EVER uttered on @FoxNews.

“What I saw was a minstrel show today—him in front of all these white people, mostly white people embarrassing himself and embarrassing Americans but mostly African Americans because every one of them is sitting either at home or with their phones watching this, cringing,” Lemon said on air.

He also used Kanye West’s late mother Donda to attack him, saying, “This was an embarrassment. Kanye’s mother is rolling over in her grave.”

As someone whose mom died early, this really pisses me off. Saying Kanye’s late mom is “rolling over in her grave,” is about as low as you can possibly go when trying to hurt someone. I don’t understand what CNN is doing. https://t.co/T2lNLI07jK

Chris Cuomo, meanwhile, developed the skill of mind reading and claimed that President Trump was having racist thoughts while sitting and listening to West.

In response to President Trump calling himself a “nationalist” in October, the network went into a frenzy.

In response, White House reporter Jim Acosta said, “I don’t think it’s a stretch for a lot of Americans out there to wonder whether or not the president is secretly considering himself a white nationalist.”

CNN personality Kaitlan Collins also joined in, exclaiming on air, “I believe in the United States! I’m not a nationalist. Hitler was a nationalist!”

Even the reliably liberal Jeffrey Toobin objected to Collins’ claim, saying, “Oh, please. Come on. That term has not become like Hitler.”

Collins replied, “It has! That is why people do not use the word nationalist! Because it has a negative connotation. It is not the nationalist of Teddy Roosevelt in the 1940s.”

Kaitlan Collins later told Breitbart News in an email that she actually said “1920s” instead of “1940s.”

CNN host Jake Tapper ran a segment in September about the description of President Trump’s penis, which was written about in Stormy Daniels’ book.

When Daniels came out of the bathroom, she claims Trump was lying on the bed in his underwear. They had sex. She then describes his genitalia in great detail. “His penis is distinctive in a certain way,” she writes. Proof, her attorney Michael Avenatti says, she is tired of being called a liar by Trump’s people. 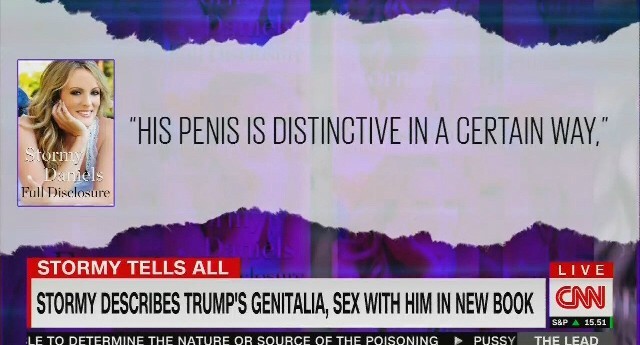 Late night hosts were similarly unhinged, making a number of jokes about Daniels’ description of his private area.

The topic was brought up on CNN once again in October by Don Lemon, who interviewed Daniels, asking, “You said you don’t have many regrets, but the one that you have recently is writing about the president’s private parts. Why do you regret that?”

“I don’t really regret it,” she said. “I just have a couple moments where I’m like, ‘That was kind of mean.’ But, then I look back on all the horrible things he’s said about other people and women and calling women pigs, and attacking girls’ weights and their looks, and then I don’t feel so bad.”

In October, CNN’s Don Lemon said on air that white men are the real terror threat in America.

“We have to stop demonizing people and realize the biggest terror threat in this country is white men, most of them radicalized to the right,” he said.

Finally, in the best example of CNN’s activism all year, reporter Jim Acosta hogged a microphone at a press conference in November, physically keeping it away from a female aide who was trying to retrieve it.

Trump told Acosta, “I will tell you what, CNN should be ashamed of itself having you working for them–you are a rude, terrible person, you shouldn’t be working for CNN.”

His press pass was later suspended, with Sarah Sanders saying in a statement that the White House will “never tolerate a reporter placing his hands on a young woman just trying to do her job as a White House intern.”

This led CNN to begin a lawsuit, and Acosta’s press pass was later reinstated, causing CNN to end their lawsuit.

Today the @WhiteHouse fully restored @Acosta's press pass. As a result, our lawsuit is no longer necessary. We look forward to continuing to cover the White House.