U.S. workers with the United Auto Workers (UAW) are suing General Motors (GM), noting that the multinational corporation has continued employing temporary workers instead of hiring recently laid off Americans.

The lawsuit claims that GM has breached their labor contract by keeping temporary workers employed at the Fort Wayne, Indiana plant instead of union workers that have been recently laid off by the corporation.

There are approximately 1,000 seniority employees on layoff nationwide, including 690 employees laid off at the Lordstown Ohio Assembly Plant, many of whom have applied to transfer to openings at the Fort Wayne Plant.

“There are approximately 1,000 seniority employees on layoff nationwide, including 690 employees laid off at the Lordstown Ohio Assembly Plant, many of whom have applied to transfer to openings at the Fort Wayne Plant,” UAW has said in a statement.

GM recently announced it would lay off 14,700 workers in North America — including 3,300 American factory workers — a direct result of the corporation’s outsourcing business model whereby U.S. workers have had their jobs offshored to Mexico for decades. 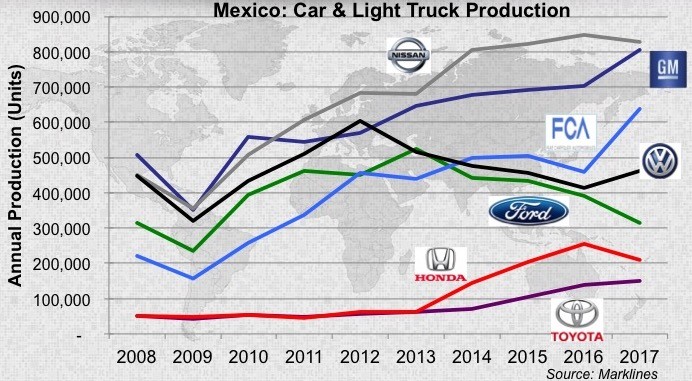 “You take the heart away from a body, the body collapses,” a laid-off GM worker told News 5 Cleveland.

“The core of this community is General Motors,” an Ohio GM worker said with tears in her eyes.

This year, GM executives expect to stop production at four American plants, including Detroit-Hamtramck and Warren Transmission in Michigan, Lordstown Assembly in Ohio, and Baltimore Operations in Maryland. This comes after GM laid off about 1,500 American workers in Lordstown earlier this year while their Mexico production remained unaffected.

Offshoring production out of the U.S. to Mexico has proven cheaper for GM executives, as American workers earn $30 an hour while Mexican workers earn about $3 an hour, a 90 percent cut to wages that widens the corporation’s profit margins.