Labor Secretary Alex Acosta said on Monday that the Trump administration has launched a new website to encourage young Americans to consider trade apprenticeships as a viable alternative to a costly and often debt-inducing college education.

Acosta, speaking at the National Association of Counties annual legislative conference, announced the launch of apprenticeship.gov and explained how it would help young career seekers, educators, and employers.

“Apprenticeships are another incredibly important approach,” Acosta said. “You know as we look out there at this economy, I think we need to take a step back and evaluate: What signals do we send to young Americans?”

Acosta said he recently visited an apprenticeship program for the United Brotherhood of Carpenters in Missouri, which helped participants not only parlay their skills into a degree but provided them a living wage and no college debt.

“But here is what I found most impressive about it,” Acosta said. “They showed me their rate sheets when the young men and women left that apprenticeship program.” 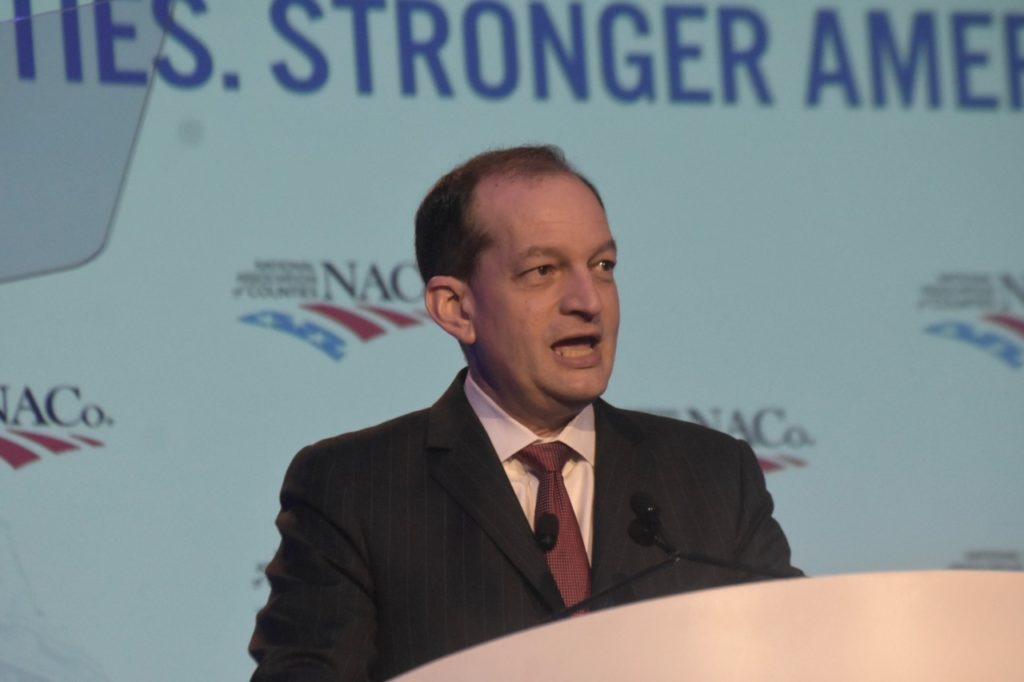 “And so, the questions is, what signals are we sending to young Americans,” Acosta said. “Are we saying, ‘You only have one path to success, and all other paths are no good,’ Or are we saying, ‘There are multiple paths?’”

College, he said, could lead to lucrative careers in law or medicine but would most likely result in significant college debt.

“Or you can go be an apprentice carpenter, and you can build on something, and you won’t have student debt, and it won’t take as long, and you’ll also have a good wage,” Acosta said. “Decide what you love and what makes you happy because the goal is a family-sustaining wage.”

Acosta said the website is a way to provide young people with a resource for choosing a path other than college.

The website — with a banner that reads, “Your One-Stop Source for All Things Apprenticeship” — features a wide range of information, including a search engine for locating apprenticeships and articles about some of those opportunities.

The homepage on Tuesday featured a story on women in construction, “the first software development apprenticeship program approved by the Department of Labor,” and sources for entering the corporate world.

The website also allows employers to post apprenticeships and offers educators a way to partner with apprenticeship programs to benefit their students.

The website also offers a few statistics; 91 percent of completed apprenticeships result in employment, 461,000 new apprenticeships have been provided since January 1, 2017, and the average starting wage is $60,000 a year.