Rep. Alexandria Ocasio-Cortez (D-NY) responded to the mass shootings at two mosques in Christchurch, New Zealand, on Friday by questioning the “thoughts and prayers” often expressed in sympathy with victims.

“At 1st I thought of saying, ‘Imagine being told your house of faith isn’t safe anymore.’,” she tweeted.

“But I couldn’t say ‘imagine.’ Because of Charleston. Pittsburgh. Sutherland Springs.

“What good are your thoughts & prayers when they don’t even keep the pews safe?” she concluded.

At 1st I thought of saying, “Imagine being told your house of faith isn’t safe anymore.”

But I couldn’t say “imagine.”

Because of Charleston.
Pittsburgh.
Sutherland Springs.

What good are your thoughts & prayers when they don’t even keep the pews safe?pic.twitter.com/2mSw0azDN8

For the past few years, many advocates of gun control have responded to mass shooting events by openly mocking the expression “thoughts and prayers.”

Last year, for example, liberal comedian John Oliver, who hosts Last Week Tonight on HBO, reacted to the mass shooting at the Marjorie Stoneman Douglas High School in Parklands, Florida, by saying (via Newsweek): “Thoughts and prayers, fuck your thoughts and prayers, it’s a mental health problem, yeah but it’s also a gun problem and then someone says, ‘Now is not the time to talk about gun control’ and everyone moves on until it inevitably happens again.”

Ocasio-Cortez later clarified that is exactly what she meant in her tweet, and criticized the National Rifle Association:

(“Thoughts and prayers” is reference to the NRA’s phrase used to deflect conversation away from policy change during tragedies. Not directed to PM Ardern, who I greatly admire.)

New Zealand has more restrictive gun laws than those in the United States. It is not yet clear how the murderer, or murderers, obtained the weapons used in the attack.

A report by the New Zealand Herald indicated that an armed Muslim man “chased the shooters and fired two shots at them as they sped off” from one of the sites targeted.

Ocasio-Cortez also re-tweeted a claim that President Donald Trump had inspired the shootings: 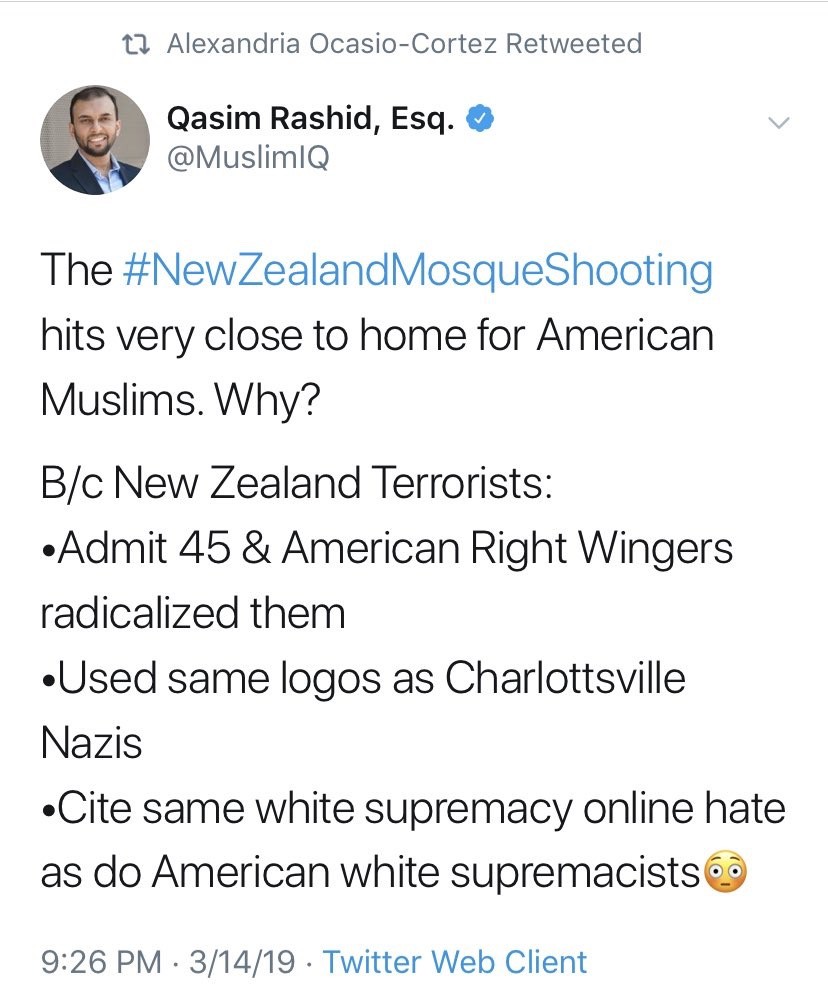 The ideological motivations of the shooter, or shooters, were not yet clear, though a manifesto suggested an attraction to white supremacy, socialism, and “eco-fascism,” as well as a hatred of Muslims.