Italy’s Lega (League) party has doubled in popularity since its election victory a year ago, according to a nationwide poll Monday.

At the time of national elections on March 4, 2018, fewer than one in five (17 percent) voters said they favored the League over any other party, whereas that figure today has nearly exactly doubled to 33.9 percent, making the League Italy’s favorite party by a significant margin.

In a distant second and third place are the Democratic Party (PD) and the League’s governing partner, the Five Star Movement (M5S), who command allegiance from 21.1 percent and 21 percent of Italians respectively. Monday marked the first time since the elections that the PD has polled higher than M5S, even if they did so by only a tenth of a percentage point.

The M5S has suffered a constant decline in popularity since elections a year ago, losing nearly 11 percentage points during this period.

The center-right coalition, on the other hand, which joined with M5S to form a national government, is stronger than ever, supported by nearly 47 percent of Italian voters. In elections last March, the center-right took 35 percent of the vote, the strongest showing at the time.

The current populist coalition government composed of the League and M5S enjoys an approval rating of 54 percent of Italians, according to another poll released on March 15. 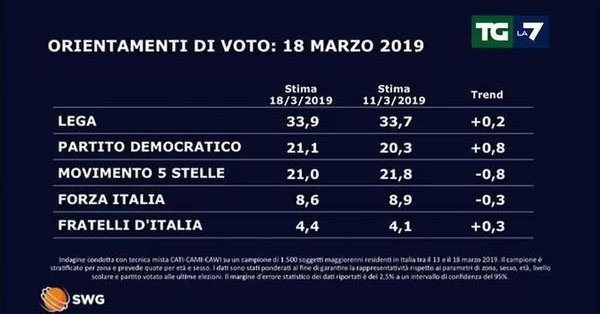 Italy’s most popular political leader continues to be Interior Minister Matteo Salvini, who is also the leader of the League. Salvini’s approval rating of 59 percent is the most important reason behind the meteoric rise of the League’s popularity throughout the Italian peninsula.

The blunt and seemingly fearless Salvini, an avid user of social media, has made curbing illegal immigration his number one goal, winning him the esteem of a significant majority of Italians.

Last year, a survey revealed that Mr. Salvini is the most trusted politician in the country.