The United States owes the world $1 trillion because of the damage it has caused the global economy with carbon emissions.

Over the past three decades, the United States has made four international commitments to reduce its emissions: at Rio in 1992, at Kyoto in 1997, at Copenhagen in 2009, and at Paris in 2015. Yet ambitious agreements to reduce emissions have in each case been followed by steadily increasing emissions as international promises have failed to turn into domestic legislation.

As a result, the United States has emitted around 20 billion tons of carbon dioxide more than it has promised to since 1992. By 2025, it will likely overshoot the target by another 5 billion tons. On its own, the 25-billion-ton surplus amounts to more than total Chinese, Indian, and European Union emissions last year. It will cause more than a $1 trillion in damage to the global economy over the coming years, based on an estimate produced by the federal government in 2016 that each ton of emissions causes about $42 of economic damage to the global economy. 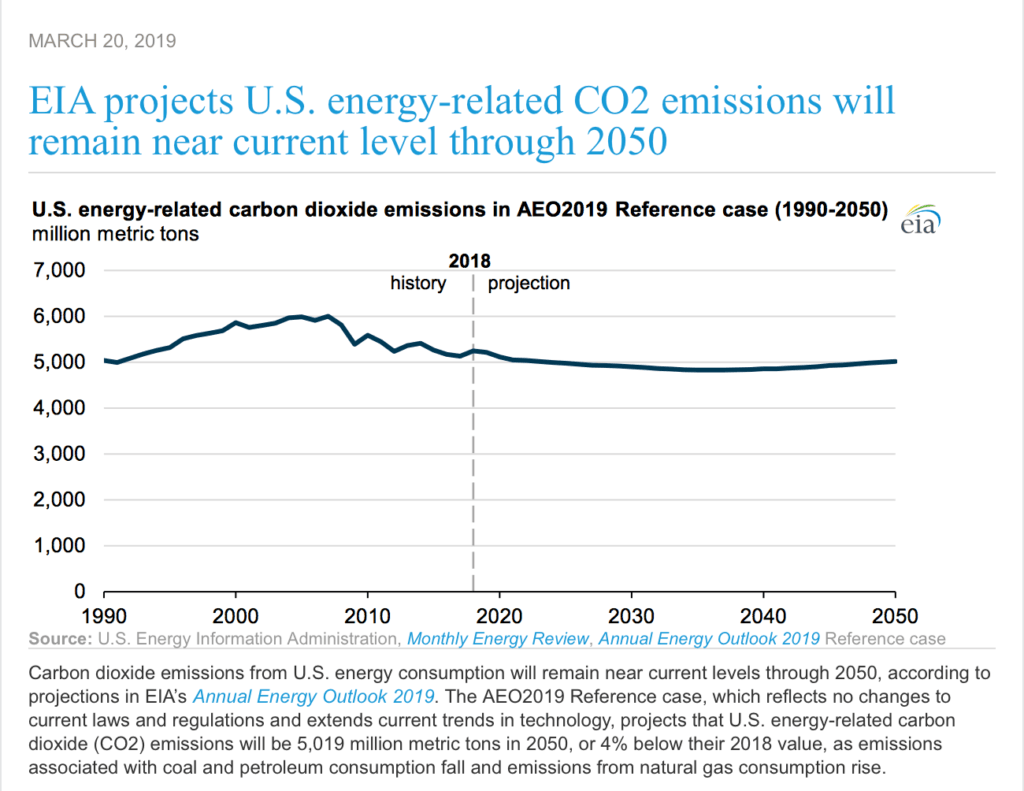 But the report that Foreign Policy relies on, in part, is from Rhodium Group, which comes to different conclusions than the federal Energy Information Administration about U.S. Carbon emissions:

Carbon dioxide emissions from U.S. energy consumption will remain near current levels through 2050, according to projections in EIA’s Annual Energy Outlook 2019. The AEO2019 Reference case, which reflects no changes to current laws and regulations and extends current trends in technology, projects that U.S. energy-related carbon dioxide (CO2) emissions will be 5,019 million metric tons in 2050, or 4% below their 2018 value, as emissions associated with coal and petroleum consumption fall and emissions from natural gas consumption rise.

The magazine analysis claims “recent advances in climate science make it possible to link the damage associated with an extreme weather event to emissions from an individual country.”

It cites a study in Nature in which the authors use the heat wave in Argentina in 2013 and 2014 as a case study.

“They credibly find that emissions from the United States made the heat wave 28-34 percent more likely,” the magazine reported on the study, which is only accessible if purchased.

“With every year that passes, climate change is more devastating,” the magazine reported. “A large and growing majority of Americans want the U.S. government to do its part to limit the damage.”

“Three decades of climate history suggests that there will be another opportunity for legislation—be it a Green New Deal or something else,” the magazine reported.

“If not, the prospect of litigation looms large: Someone, somewhere, at some time, will eventually have to pay the price for America’s emissions,” the magazine report concluded.