The annual admittance of more than 1.2 million legal immigrants is expected to drive the United States’ foreign-born population to unprecedented levels by 2060, Census Bureau data finds.

The latest projections from the Census Bureau predict that the already 44.5 million-strong foreign-born population living in the country will rise to a historic 69 million in just four decades should the country’s mass legal immigration policy continue.

In 1970, 1-in-20 U.S. residents were foreign-born. By 2060, if legal immigration levels go unreformed, about 1-in-6 U.S. residents will be foreign-born with about 579,000 foreign residents being permanently added to the population every year. In contrast, the native-born population is expected to increase by just 1.3 million a year over the same period.

Due to legal immigration driving most of the U.S. population growth, the country is on track to add nearly 80 million new residents to the population by 2060. This would tick the total resident population up from the current level of about 326 million to an unprecedented 404 million total residents.

As Axios reported, the legal immigration-driven population growth is likewise expected to forever change the demography of the U.S., making the country majority-minority by 2060, according to Census researchers:

By 2045, the U.S. as a whole is projected to become majority minority. And the changes are already underway: non-white Americans are now the majority of the population in four states, as well as in the most prosperous and powerful U.S. cities. [Emphasis added]

Since 2010, non-Hispanic white people have become the minority in 32 more U.S. counties — for a total of 372 counties, according to U.S. Census Bureau data. The trends are largely due to a rise in Hispanic and Asian immigrants as well as slightly higher birth rates among non-whites. [Emphasis added] 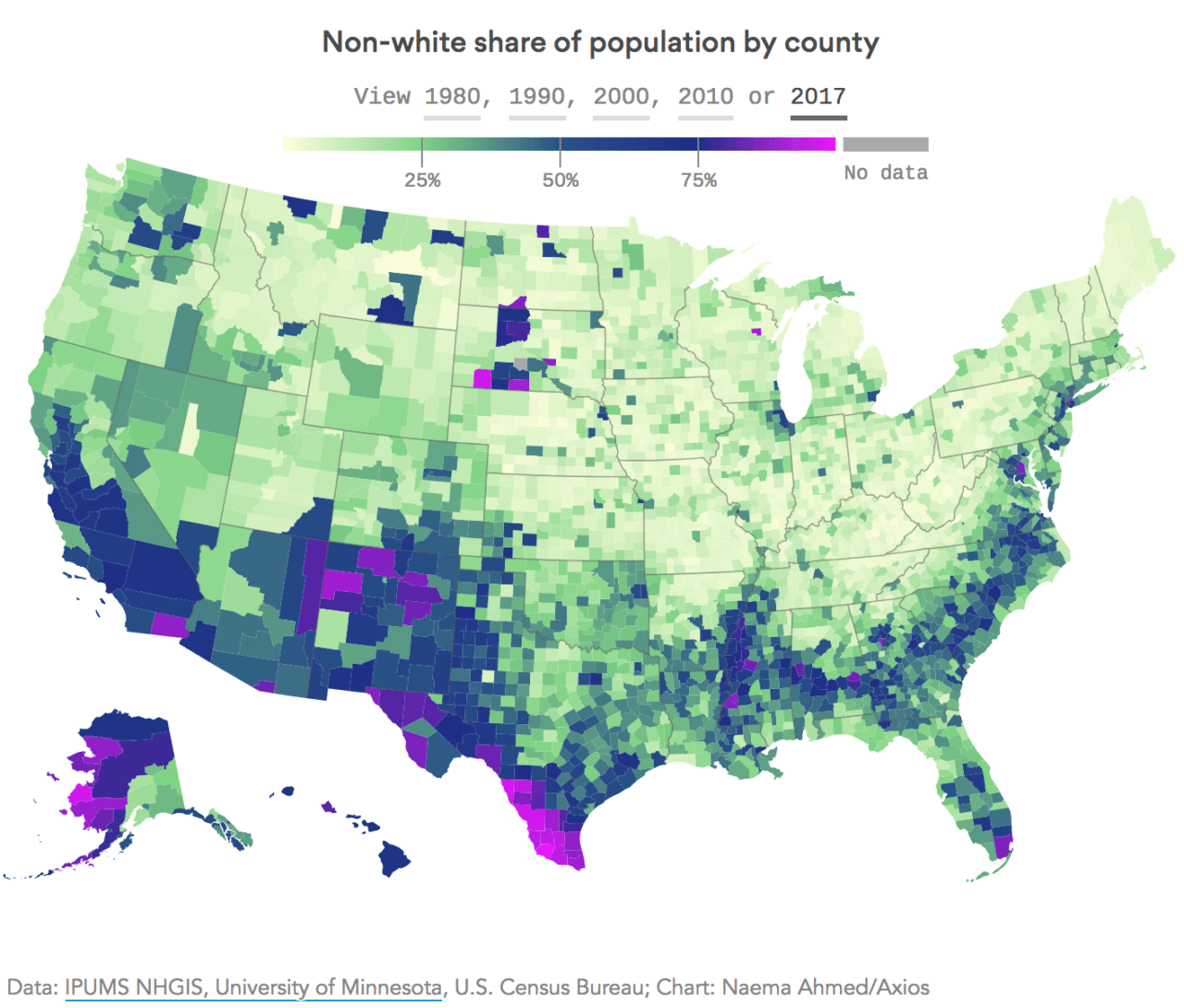 Demographic data from Pew Research Center recently revealed that Hispanic Americans are set to replace black Americans as the largest minority voting bloc in the country for the 2020 election, Breitbart News noted. Similarly, Pew Research now estimates that about 1-in-10 U.S. voters will have been foreign-born in the 2020 election — a trend that bodes well for Democrat politicians.

Ronald Brownstein, senior editor for The Atlantic, noted this year that nearly 90 percent of House congressional districts with a foreign-born population above the national average were won by Democrats. This means that every congressional district with a foreign-born population exceeding roughly 14 percent had a 90 percent chance of being controlled by Democrats and only a ten percent chance of electing a Republican.

Less than 1-in-10 House Republicans represent a congressional district that has a foreign-born population larger than 14 percent. Entire states, driven by legal immigration, have been transformed electorally, Brownstein’s analysis found.

The New York Times and Axios admit that legal immigration at its current rate of more than 1.2 million nationals admitted a year will continue shifting the American electorate more towards Democrat control, as discovered in the 2016 presidential election between then-candidates Donald Trump and Hillary Clinton.

The U.S. is on track to import about 15 million new foreign-born voters in the next two decades should current legal immigration levels continue. Those 15 million new foreign-born voters include about eight million who will arrive in the country through chain migration, where newly naturalized citizens can bring an unlimited number of foreign relatives to the country.

Sens. Tom Cotton (R-AR), David Perdue (R-GA), and Josh Hawley (R-MO) have reintroduced the Reforming American Immigration for Strong Employment (RAISE) Act to not only end chain migration — which has been used to import entire foreign villages to the U.S. — but also reduce legal immigration levels to 500,000 annual admissions to raise the wages of the working and middle class and relieve American workers from decades of unchecked foreign competition in the labor market. Trump previously endorsed the wage-boosting, immigration-cutting plan.