Although she later lied about this with the ridiculous claim she didn’t mean the Nazi concentration camps or the Holocaust, but only concentration camps in general (which is inaccurate and bad enough), the truth is that in the Instagram post that first launched this outrageous smear the admitted socialist referenced the phrase “Never Again,” which is directly related to the Holocaust.

Saying she wanted to connect with others “who are concerned enough with humanity to say that ‘never again’ means something,” she added:

The fact that concentration camps are now an institutionalized practice in the home of the free is extraordinarily disturbing, and we need to do something about it.

Either way, the comparison is ludicrous. American migrant detention centers are humane. People are fed, sheltered, and receive medical care — all for free, all for committing the crime of trying to break into our country.

What’s more, they are not forced to work and if they agree to go back to where they belong, they are free to leave at any time.

Ocasio-Cortez has never apologized for this smear and continues to use it. To no one’s surprise, before long, others were hurling the same provocative rhetoric, including members of Ocasio-Cortez’s antisemitic Socialist Squad.

In early July, antisemite Rep. Rashida Tlaib (D-MI) told ABC’s This Week that American border detention centers are “absolutely” like concentration camps because of the “trauma” they are causing migrants.

We have two domestic terrorists who have embraced Ocasio-Cortez’s provocative rhetoric.

Spronsen was killed in July after he tried to firebomb a federal migrant detention center in Tacoma, Washington.

According to various media reports, Spronsen left behind a manifesto that echoed and appeared to be inspired by Ocasio-Crazy’s incendiary rhetoric. According to reports:

Over the weekend, in Dayton, Ohio, a second terrorist struck who apparently embraced the Squad’s demagogic rhetoric.

Before being shot and killed by police, Connor Betts murdered nine people in Dayton Saturday night and even the far-left CNN has been forced to admit he was a leftist who supported Sens. Bernie Sanders and Elizabeth Warren’s presidential campaigns. According to CNN:

The account also retweeted posts against ICE agents, including one that said, “these people are monsters,” and multiple posts condemning police, and supporting Antifa protesters, who often use violent tactics. There were also many tweets of selfies, photos with a friend and ordinary memes and nonpolitical content.

He also retweeted calls to slash the tires of ICE employees and, most notably, and on multiple occasions, embraced and spread Ocasio-Crazy’s “concentration camp smear.”

Here is the Dayton mass-murderer spreading the word using his “Flowers for Atomsk” Twitter handle: 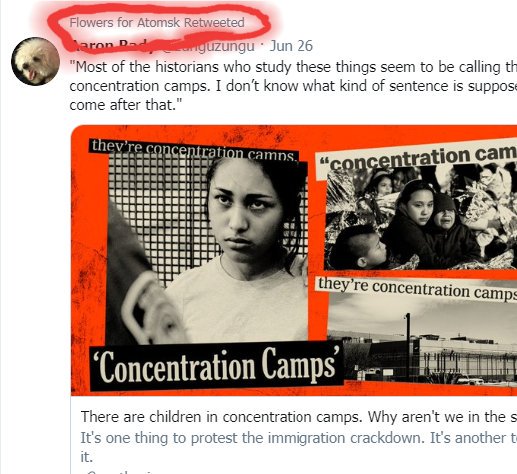 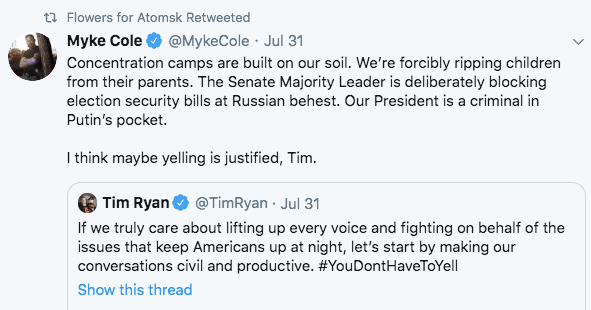 The real news is here is the establishment media’s shameless double standard. While the media are going crazy over the El Paso terrorist’s anti-Hispanic rhetoric and attempting to claim Trump was his inspiration, the very same media are dutifully covering up how two left-wing terrorists embraced Ocasio-Cortez’s inflammatory rhetoric.

Personally, I object to this kind of guilt-by-association. Watching the news media attempt to stifle free speech by connecting someone’s violence to another person’s speech is as un-American as it gets. But the media’s own rules do connect Ocasio-Cortez and two members of her Socialist Squad directly to these two terrorists.

I should add that it’s fascinating to watch the deep-in-denial media further destroy its own credibility by covering these facts up. The media know that we know the truth. The media know that the truth about Ocasio-Cortez  and these two terrorists is all over social and alternative media, but still they don’t care that we know because their partisan rage constantly overwhelms their decency and integrity.

All the media can do is rage against Trump, even with the “concentration camp” elephant in the room.

The media’s bitterness is such they have lost all self-control. The media’s hatred is such it overwhelms a survival mechanism that should  tell them to at least acknowledge the Ocasio-Cortez connection — if only to pretend they care about credibility.