The data shows the voters in the two parties have a mirror image response to the wave of roughly 800,000 unskilled and poor Central American migrants who crossed the U.S. border in the last ten months. The GOP splits 37 percent to 77 percent on two questions asking if the rules should be eased or reformed, while the Democrats split 79 and 32 percent on the same two questions.

The Democrats’ welcome for illegal and legal migrants is accompanied by many Democrats’ willingness to leave the toughest jobs to the illegal migrants. The Pew survey showed that only ten percent of Democrats — but 32 percent of Republicans — say migrants “mostly fill jobs U.S. citizens would like.” The numbers suggest that a larger slice of the GOP’s base cares about companies’ use of illegal migrants to displace blue-collar Americans.

Many Americans are already working in chicken processing factories, and more will take the jobs when low-wage illegals are sent home and the starting wages are pushed up. Another win for Econ 101: supply & demand. https://t.co/p5QS6KccV8

The poll did not offer respondents information about the scale and costs of migration, especially if the migration rules are eased. 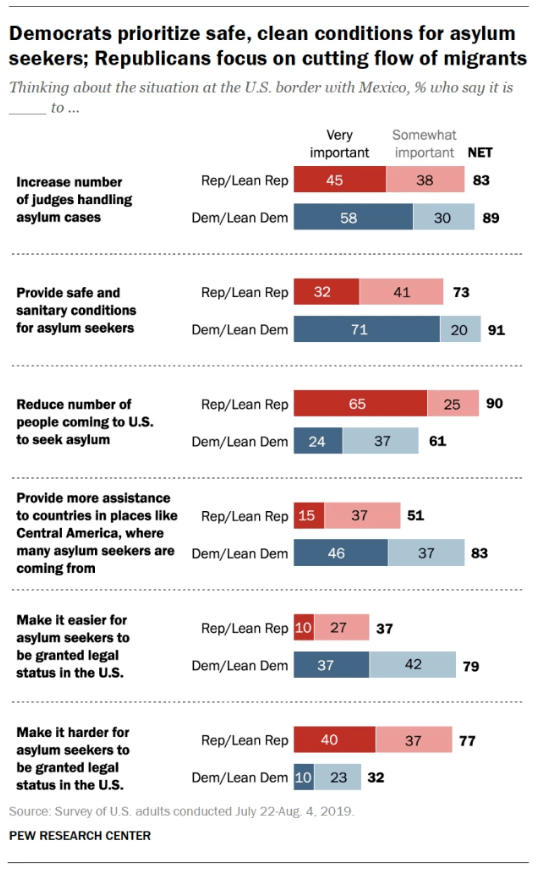 The poll also suggests the GOP is more unified on the issue than are Democrats. “A greater share of Republicans (54%) than Democrats (37%) say they strongly agree with their own party’s stance on illegal immigration,” reported Pew.

But the pro-migration views of Democrats’ progressive wing are increasingly being echoed by their leaders — even when the illegal migrants help lower wages for Americans and Democratic base groups, such as African-Americans. The pro-migration wing consists of the “strongly agree” 37 percent of the party, according to the Pew survey. Other polls show stronger support for low-wage migration among the Democrats’ upper income college graduates and a lower share among blue-collar Democrats.

House Speaker Nancy Pelosi told a Texas audience on August 11 that illegal migrants “make America more American with their values,” according to an Aug. 12 report in The Monitor.

“Every one of these immigrants who comes with the hope and determination and optimism to make the future better for their families, well, those are American traits and these immigrants make America more American with their values,” Pelosi said during a news conference after the tour, and before the delegation concluded their several-day trip to El Salvador, Guatemala, Honduras and McAllen, before returning to Washington, D.C.

“We come here to make sure that we’re honoring the dignity of the migrants coming into our country, that the conditions they’re being met with meet their needs, but that also respect their dignity and honor the values of America,” Pelosi said. “When we don’t respect the dignity of all of those migrants, we lessen ourselves.”

Pelosi added: “We’d rather be spending our resources on how we can be welcoming to newcomers to our country without having them to be victims of coyotes or whatever that are out there, but to be the United States of America — and as Ronald Reagan said, if you close the door you will stop the vitality of America that the beacon of hope that the statue of liberty represents.”

Jobs processing meat and poultry are hot, dirty, monotonous, and dangerous. Across America immigrants have always taken these jobs. ICE raids should focus on those who are a threat to our safety, not those who work hard every day to put food on our tables.

Durbin’s endorsement of jobs for illegal-migrants came after the government raided seven meatpacking plants in Mississippi in communities where a relatively large number of African-Americans do not have jobs.

Both Durbin and Pelosi also oppose new regulations by the White House which seek to exclude migrants from getting green cards if they rely on welfare or cannot speak English:

This hateful, bigoted rule is a direct assault on our nation’s proud heritage as a beacon of hope and opportunity for all and a clear attempt to demonize and terrorize the newcomers who make America more American. It will be swiftly challenged and defeated in the courts. https://t.co/x5q4E6KpPD

Penalizing immigrants living here legally will do nothing to fix the situation at our border and will only sow fear & distrust in immigrant communities across the US. https://t.co/xmTg5NZ0rN