Claire Chase, a GOP candidate for the U.S. House of Representatives in New Mexico’s Second Congressional District, called President Donald Trump an “a**hole unworthy of the office” of the presidency in a Facebook post in August 2015.

That post, and several others unearthed by Breitbart News exclusively, demonstrate Chase’s once deep hatred of the man who would go on to win the presidency in November 2016. It also represents an interesting wrinkle in a key battleground district in a seat Republicans lost in 2018 in the midterm elections but aim to win back in 2020 with a credible challenge to a weak freshman Democrat, Rep. Xochitl Torres Small (NM).

“For all my friends who like Donald Trump, I’m working on a fuller rant than he’s an a**hole unworthy of the office and the power of the President of THE United States,” she wrote on August 30, 2015, as Trump was beginning to surge to the front of the GOP pack in the presidential primaries. “Marco Rubio is the guy. Carly Fiorina is the woman. This is the ticket to beating Hillary Clinton.” 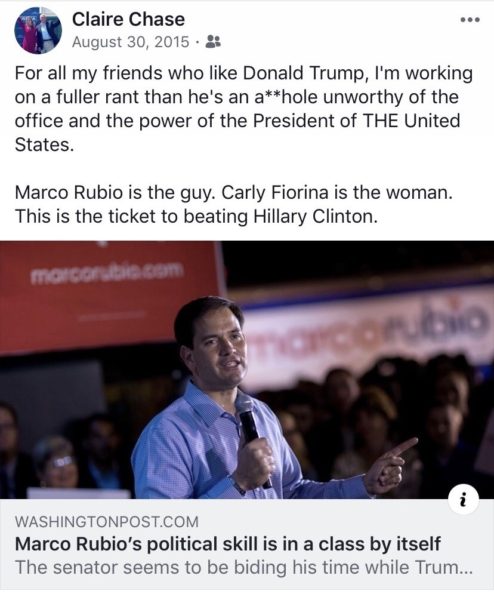 Later, on September 6, 2015, Chase wrote, referencing a Politco article about how former Alaska Gov. Sarah Palin was eyeing a position as Energy Secretary in a then-potential future Trump administration, that she believed again Trump should not be president. 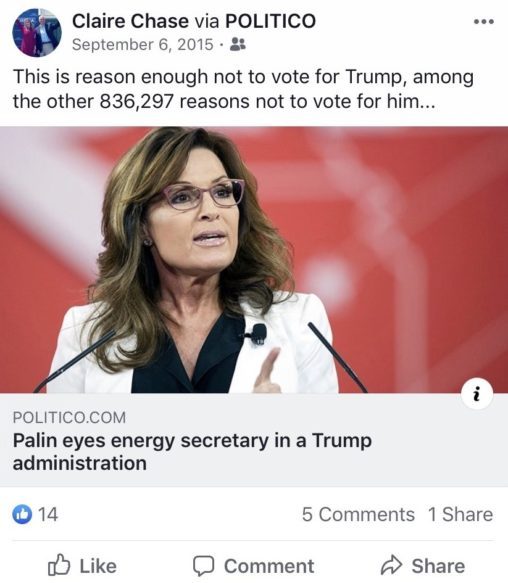 Two days later, on September 8, 2015, Chase wrote another post in response to an article about Trump saying he had always felt like he served in the military even though he had not.

Ugh. I *REALLY* dislike Donald Trump. I also went to military boarding school. Can I march in a military formation. Sure. Do I know what rank someone is by what’s on their uniform? Yes. Can I recite the military alphabet. Yep. Did I go overseas and fight terrorists and watch friends get injured or die? Nope. Did I make huge sacrifices to defend this country from her enemies? No. Have I put my life on the line for almost less than minimum wage? I haven’t. Why? Because I’m not in the goshdamn military. That’s why. This is beyond offensive. 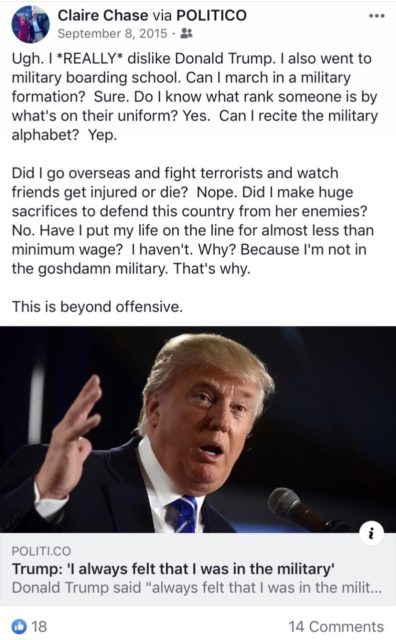 In response to a request for comment about these Facebook posts from Breitbart News, Chase’s consultant Craig Murphy said that she has come around about Trump.

“Claire did not support him in the primary, but she voted for President Trump in the general, celebrated his election, supports him now and thinks he has done a great job as President,” Murphy said on Chase’s behalf in an emailed statement.

Murphy’s statement, however, is contradicted by two different Facebook posts she made in 2016. In one post in January 2016, she pledged her support to Libertarian nominee Gary Johnson in the general election if Trump won the nomination. In another in November 2016 after the general election, she explicitly stated she did not support Trump.

On January 20, 2016, when Palin endorsed Trump for president, Chase responded with a Facebook post of her own, saying she puked in her mouth in response. She also said she would not vote for Trump for president even if he won the nomination.

“This made me throw up in my mouth a little bit,” Chase wrote. “If Trump is the nominee, I’m voting Gary Johnson.” 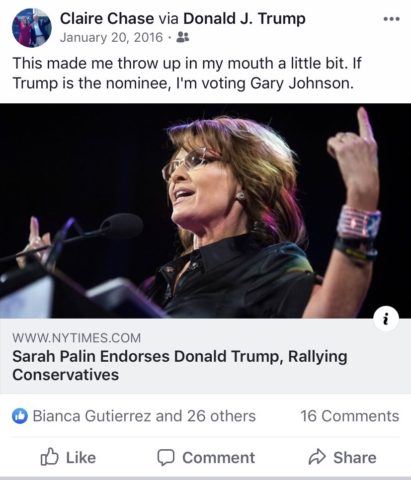 After Trump won the presidency and defeated Democrat Hillary Rodham Clinton in November 2016 in the general election, Chase was against him.

On November 9, 2016, post-election day, Chase wrote again that she did not support Trump for president in 2016. She even gave people who hated Trump advice on which countries to move to until the Trump presidency was over, if they so chose to leave America.

I didn’t support Trump but I was never, never with her. That being said, buh-bye Hollywood! Take your uneducated anti-fracking campaigns with you. And everyone else that threatened leaving if Trump won, I recently read an article that Mexico, Costa Rica, Panama, Ecuador and Columbia were all great places to live for 4-8 years. If you’re wondering why I read this, it’s because I thought I’d be in your shoes this morning. For my real friends who supported Hillary, I still love you as friends even though we never saw eye to eye in this election. I was brought up to have an open mind and hear both sides of the story, and would gladly continue for at least the next 4 years. Full disclosure, I *despise* Hillary because of Benghazi so I won’t be open to comments about her. 8 years ago, you were all tired and wanting big change. As a result, Obama became President and we as conservatives have all survived, perhaps a little worse for wear but we survived all the same. The same thing occurred last night just on our side of the aisle. I promise you will survive, even if you’re not happy about it. #ifeelyourpain #lookingatyouLeoDicaprio #packyourbags 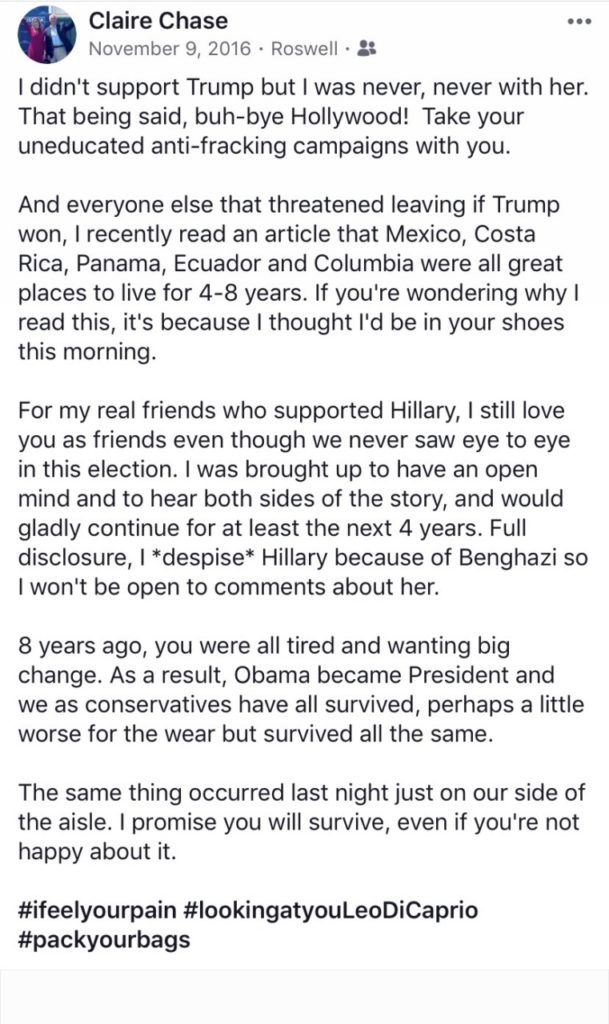 Chase’s consultant, Murphy, insisted that despite these comments—where she said she would vote for the Libertarian Johnson over Trump if Trump were the nominee, and her comment after Election Day in 2016 where she said she did not support Trump—he was confident that Chase did back Trump in the general election.

Murphy said he was 100 percent “sure she voted for him” and said that Chase “even went to the Trump hotel lobby in DC with others to celebrate November 9. (Day after the election). She was ecstatic about his election and even more ecstatic about his performance since.”

Murphy also provided a Facebook post from June 2, 2016, where Chase defended Trump supporters from criticism–but again said she was not one of them.

“Most of you know that (surprise!) I am a Republican who has not been a supporter of Trump,” Chase wrote in that post. “You also know that I am very reasonable and enjoy seeing both sides of the political argument. I have been *appalled* at the treatment of people who support Trump and found this article an excellent read on that subject. Hope you all will take the time to read this!”

Murphy also said that Chase refuses to apologize for the vulgar language she used to bash the now-president. When asked directly if she would apologize and disavow calling the president an “a**hole” unfit for office and saying she puked in her mouth when Palin endorsed Trump, Murphy simply replied, “The answer to that question is: She was ecstatic about his election. And even more ecstatic about the job he has done. President Trump won her over.”

She also continued her Trump-bashing in several other posts over the course of the full year of 2016, especially in the primary.

“Y’all had to know you couldn’t escape a political post on Super Tuesday. For those of you in primary states today, go vote. But it’d be a lot cooler if you didn’t vote for Trump. #dumpTrump,” she wrote on March 1, 2016. 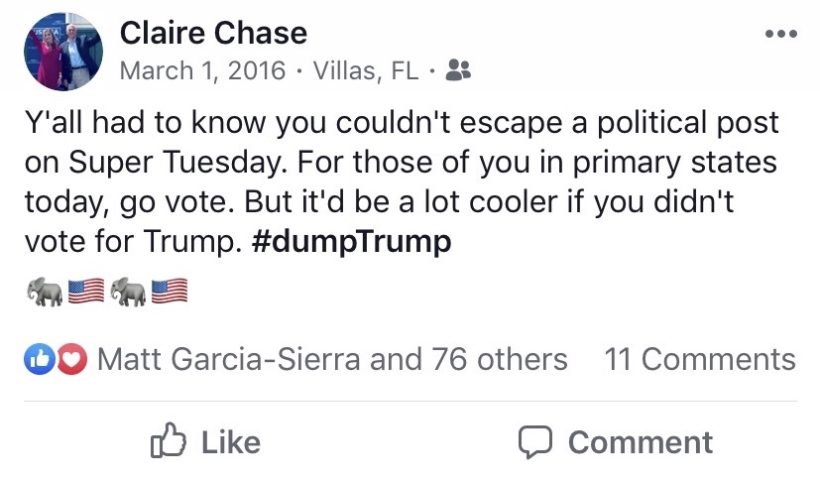 “For my friends who think Trump is the anti-politician, welcome to The Game. You’ve been played,” she added on April 22, 2016, with a link to a Washington Post story bashing Trump. “Every elected official breaks to the will of Washington because that’s how it works.” 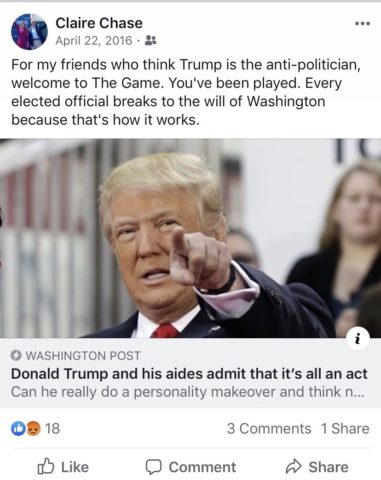 Chase is a wealthy energy executive who has deep ties to the establishment wing of the Republican Party. In fact, Vice President Mike Pence even appeared at an official event with her just a few weeks ago in New Mexico, when he praised her effusively in his remarks according to an official White House transcript.

“Well, hello, New Mexico!” Pence said to applause on August 21 in a speech at Elite Well Services in Artesia, New Mexico. He continued:

I want to say thank you to Claire Chase. Thank you for those kind words. Claire is the Chairman of New Mexico Oil and Gas. She is an advocate for a growing New Mexico economy. Would you join me in thanking Claire Chase for her leadership — past, present, and future? Thank you, Claire.

Pence’s office was shocked when they learned of Chase’s history of anti-Trump comments, completely unaware of them beforehand.

“He of course disagrees with statements like that about the president,” a spokesperson for the vice president told Breitbart News when reached on Thursday about the comments Chase made over the years about Trump.

“This was an official event, and as she’s chairman of New Mexico Oil and Gas, he was thanking her for her leadership in the past and future on USMCA, as he has thanked business leaders across the country for their efforts on the issue,” the vice president’s office added.

As for any endorsements, or not, that would not come from the official office—but from the campaign—and no endorsement has been issued as of this point from Trump or the vice president.

This district is one of the most important battleground districts in the country and critical if Republicans are to retake the House majority. While one might think these revelations may dash GOP hopes of retaking the all-important New Mexico Second Congressional District seat from Democrats in 2020, there is another candidate. Yvette Herrell, a Republican woman and Statehouse veteran who narrowly lost the seat in 2018’s blue wave, is running again.

Trump is headed to New Mexico on Monday, and as of now both Chase and Herrell are expected to be in attendance at the rally. It remains to be seen what the president will think of these comments from Chase about him in 2016 and whether they will have any impact on his handling of the race.