President Donald Trump awarded the National Medal of Arts to Actor Jon Voight, who surprised him with a dance to the music from Midnight Cowboy.

As Trump began speaking, Voight began to dance on the stage while the Midnight Cowboy theme played on the loudspeaker.

Trump was clearly surprised by the move but grinned as Voight continued his performance.

“I want to hear that whole song, but I don’t know Jon, maybe we have to get it moving a little bit,” Trump said, calling Voight “one of the greatest living legends in cinema.” 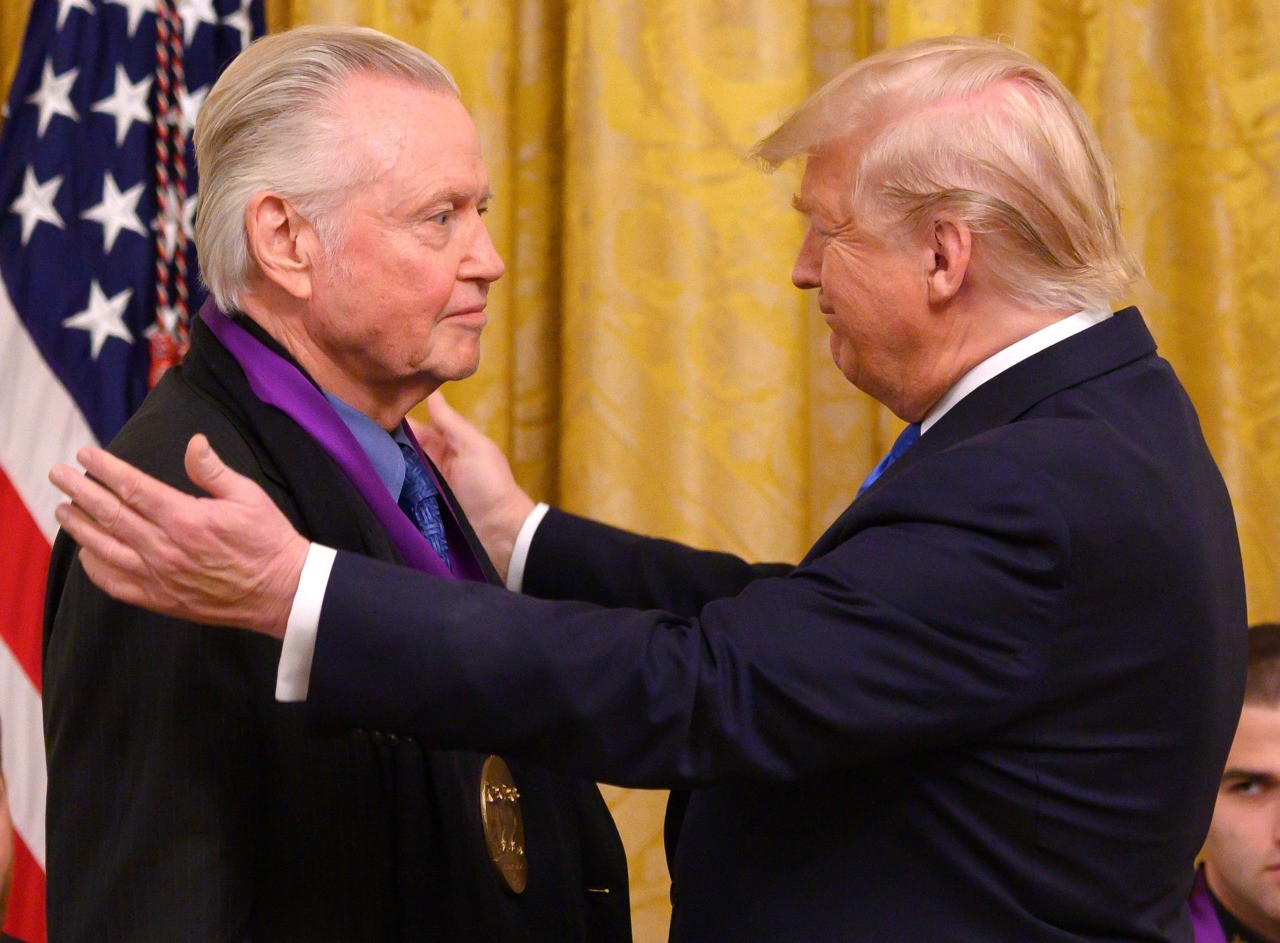 US President Donald Trump awards the National Medal of Arts to actor Jon Voight (L) in the East Room of the White House in Washington, DC, on November 21, 2019. (ANDREW CABALLERO-REYNOLDS/AFP via Getty Images) 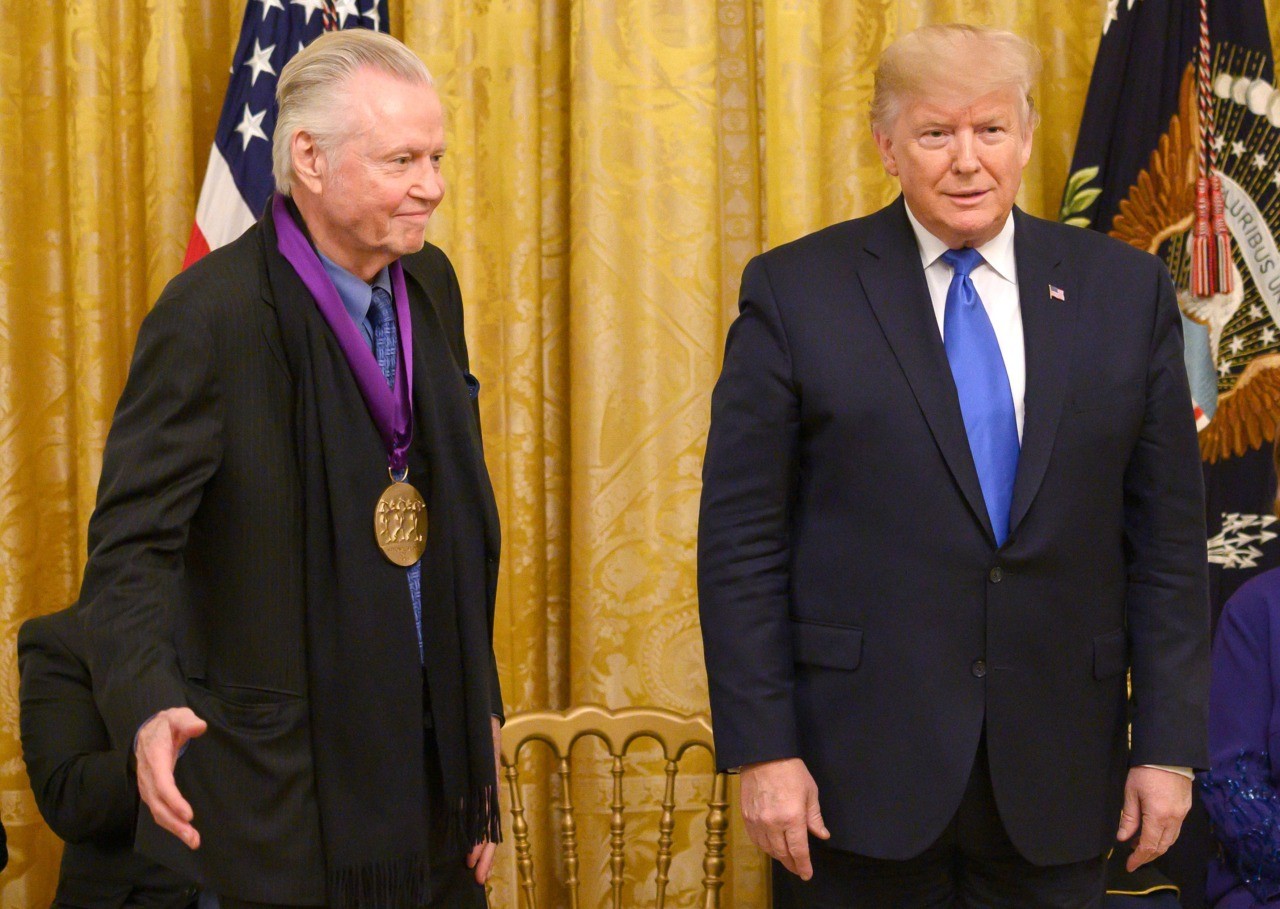 US President Donald Trump awards the National Medal of Arts to actor Jon Voight in the East Room of the White House in Washington, DC, on November 21, 2019. (ANDREW CABALLERO-REYNOLDS/AFP via Getty Images)

Trump recalled Voight’s roles in Midnight Cowboy, Coming Home, Mission Impossible, National Treasure and the film The Champ, which he called the “the greatest boxing movie all time.”

“That was some great movie,” Trump recalled. “Everyone was crying at that movie. I tried not to John, but it wasn’t easy.”

President Trump praised Voight as an actor of “astonishing range and depth,” recalling his performances in Deliverance, The Odessa Files, playing Franklin Delano Rosevelt in Pearl Harbor, and a role in the movie Ali.

“John captures the imagination of the audiences and dominates almost every single scene he’s in,” Trump said. “He’s a special person.”

Jon Voight does a jig during the National Medal of the Arts ceremony in the White House. https://t.co/aE2u6s3Azb pic.twitter.com/g5fHqsGt6L

Voight is one of the rare vocal conservatives in Hollywood and is a friend of President Donald Trump.

National Medal of the Arts Recipients

Alison Krauss for making extraordinary contributions to American music. Blending bluegrass, folk, gospel, and country into a unique style, she has entertained and enriched the souls of millions.

Sharon Percy Rockefeller for being a renowned champion of the arts, a generous supporter of charity, and a pioneer of new ideas and approaches in the field of public policy.

The Musicians of the United States Military for personifying excellence in music and service to country. From concert halls to war zones, these extraordinary patriots have inspired and uplifted their fellow Americans over generations with their incredible courage and breathtaking musical talent. The Award will be accepted by the youngest member of all Premier Service Bands, Staff Sergeant Jan Knutson.

Jon Voight for his exceptional capacity as an actor to portray deeply complex characters. Captivating audiences, he has given us insights into the richness of the human mind and heart.

Trump also awarded a medal to singer Alison Krauss, as the song “Down to the River to Pray” from the film soundtrack O Brother Where Art Thou played during Trump’s speech.

The Claremont Institute for championing the Nation’s founding principles and enriching American minds. Its publications and public events have deepened our understanding and appreciation of American freedom, democracy, justice, and rule of law. The Award will be accepted by President of the Claremont Institute, Ryan Williams.

Teresa Lozano Long for supporting the arts and improving educational opportunities. Through scholarships and philanthropy, she has helped America’s children and young adults learn the skills they need to succeed.

Patrick J. O’Connell for being one of the greatest chefs of our time. Through the Inn at Little Washington, he has raised the culinary arts to new heights of excellence by embracing regional flavors and championing local farmers.

James Patterson for being one of the most successful American authors of our time. His prodigious imagination has resulted in fascinating works that have been enjoyed by millions and his championship of literacy in America has inspired many to realize their potential.