The New York Times smeared a Trump supporter from Queens, New York, as a “white nativist” in the course of its endorsement of Sens. Amy Klobuchar (D-MN) and Elizabeth Warren (D-MA) in the 2020 Democrat presidential primary on Sunday evening.

A passage in the endorsement read as follows (original links):

The incumbent president, Donald Trump, is clear about where he is guiding the Republican Party — white nativism at home and America First unilateralism abroad, brazen corruption, escalating culture wars, a judiciary stacked with ideologues and the veneration of a mythological past where the hierarchy in American society was defined and unchallenged.

The links lead to opinion articles. The latter is an editorial from October accusing Republicans of protecting Trump politically from the consequences of what the Times considers misconduct (its claims mirror those of House Democrats).

The former is an op-ed, “The Election That Obliterated Euphemisms,” that appeared just a few days before the November 2016 election and claimed newspapers had been compelled to criticize Trump’s allegedly racist rhetoric. It went on to describe the “bigoted outpouring licensed by the Trump campaign.”

The op-ed was accompanied by a Times photograph of a man in a red t-shirt shouting in a Trump rally — presumably, a bigot, too. 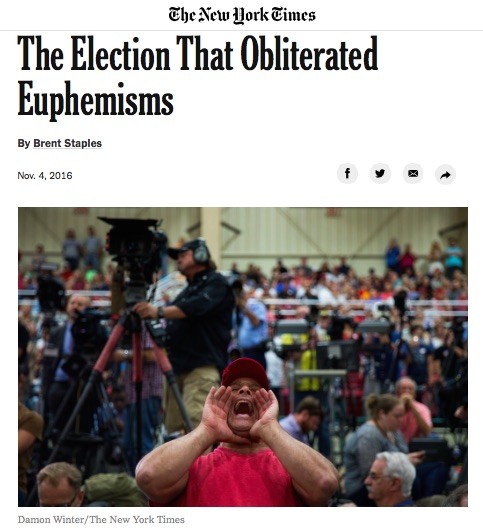 But the man was not shouting anything racist or “nativist.” He happens to be a supporter whom Breitbart News — and many other media outlets — interviewed at a rally in rural North Carolina in the closing days of the campaign. While he was clownish and boisterous, yelling “Trump for President!” in a booming voice, he said nothing racial at all.

From the Breitbart News report of Nov. 3, 2016, “Meet ‘Epic Trump Guy,’ Who Brought Rally to a Standstill“:

“Epic Trump Guy” attracted the attention of many journalists at the rally. There was no evidence reported at the time that would provide a basis for the Times to link him, then or now, to “white nativism” or “bigotry” in America.