“We must reject the perennial prophets of doom and their predictions of the apocalypse,” declared President Trump on Tuesday at the World Economic Forum in Davos, Switzerland.

Gosh, what 17-year old pig-tailed school drop out could he possibly have meant by that?

Earlier in the day, Greta Thunberg had delivered her usual cheery message of doom and gloom – “Pretty much nothing has been done” – to the assembled globalist elite.

But President Trump wasn’t having any of this apocalyptic nonsense. Not one bit.

“This is not a time for pessimists. It is a time for optimism,” he declared.

Doom-mongers like Greta – though he was too polite to name names – are, he said, “the heirs of yesterday’s foolish fortune tellers. And I have them, you have them, we all have them – and they want to see us do badly but we won’t let that happen.”

Trump listed some of the doomsday predictions which had failed to come true:

Not only were these doom mongers wrong, he suggested, but they were also leftist control freaks.

“These alarmists always demand the same thing: absolute power to dominate, transform and control every aspect of our lives. We will never let radical socialists destroy our economy, wreck our country, eradicate our liberty.”

“America will always be the strong, proud, unyielding bastion of freedom.”

This was more than a bravura act of trolling in Davos, the belly of the beast, epicentre of globalism, political correctness and the technocratic dictatorship that the Trump revolution has done so much to overthrow.

(Though, obviously, there was a trolling element too: especially in the bit where Trump completely wrong footed all those people who would like to caricature him as a planet destroyer by announcing he was leading a global program to plant a trillion trees. Hmm. I wonder where he got that idea…)

Much more importantly, Trump was doing what no other world leader has managed to do so clearly and firmly: speak up for Western Industrial Civilisation.

Sure they all pay lip service to it, Prime Minister Boris Johnson and the rest.

But Trump is one of very few leaders in the world – among the very few others are Brazil’s Jair Bolsonaro, Hungary’s Viktor Orban and India’s Narendra Modi – who truly understands that prosperity is based on growth, innovation and optimism and that this is totally incompatible with the pessimistic, anti-growth message of fashionable doomsayers like Greta Thunberg, Sir David Attenborough and Leonardo DiCaprio.

In this landmark speech, Trump threw down the gauntlet to all those politicians, economists, and other ‘experts’ – useful idiots of the green movement – who imagine that it’s possible to improve ordinary people’s standard of living while yet crippling their economy and killing their job prospects with endless environmental taxes and regulations.

“In America we understand what the pessimists refused to see – that a growing and vibrant market economy focused on the future lifts the human spirit and excites creativity strong enough to overcome any challenge.”

Exactly. As lonely voices like Matt Ridley – zoologist, author and peer in Britain’s House of Lords – keep pointing out to largely deaf ears: things are getting better and better, not worse.

We are living through the greatest improvement in human living standards in history. Extreme poverty has fallen below 10 per cent of the world’s population for the first time. It was 60 per cent when I was born. Global inequality has been plunging as Africa and Asia experience faster economic growth than Europe and North America; child mortality has fallen to record low levels; famine virtually went extinct; malaria, polio and heart disease are all in decline.

Trump totally gets this truth. What he also totally gets is that the job of a President is, perhaps above all, to look after the interests of working people. 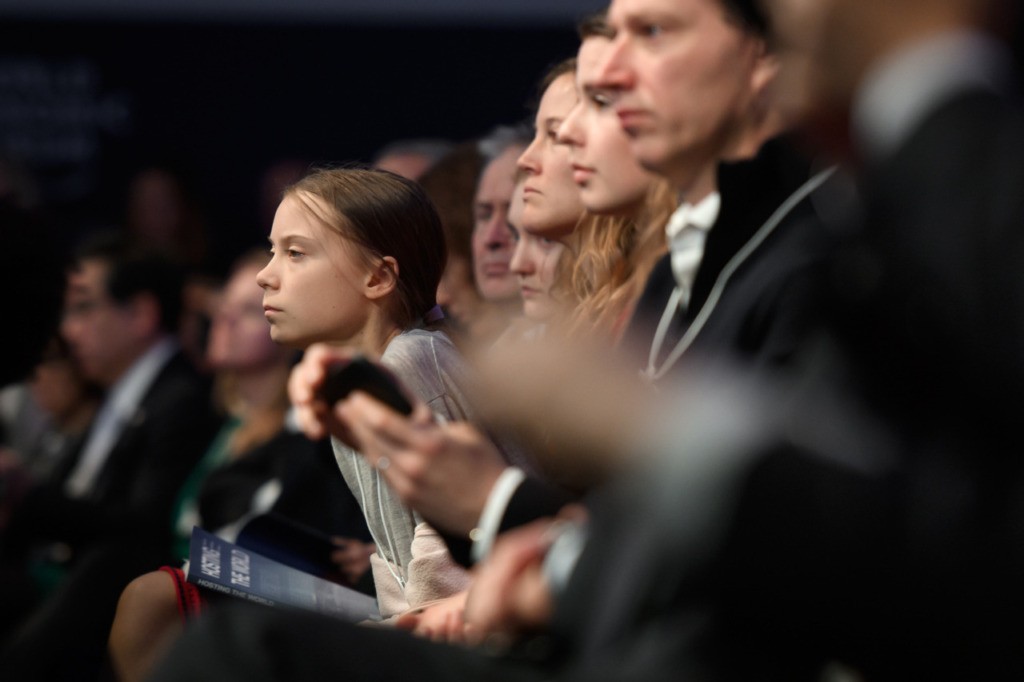 Swedish climate activist Greta Thunberg listens to the speech of U.S. president in the Congress hall during the World Economic Forum (WEF) annual meeting in Davos, on January 21, 2020. (FABRICE COFFRINI/AFP via Getty Images)

Earlier in his speech, in a wearied voice that sounded almost bored with so much #winning, he listed the leaps and bounds made by the US economy during his presidential tenure so far. This was all, he said, because he had prioritised the workers.

“Every decision we make on taxes, trade, regulation, energy, immigration, education is focused on improving the lives of everyday Americans.”

Because Trump sincerely believes this and because he also sincerely believes that this is a moral good he feels absolutely no need to engage in the kind of environmental virtue-signalling used by so many other politicians, especially conservative ones, to try to demonstrate to the leftist opponents that they can be nice guys too.

It’s why there was no mention in his speech – none at all – about ‘renewables’, which Trump understands are a complete waste of space.

Instead he sung the praises of America’s newly acquired energy independence.

“The U.S. is now the number one producer by far of oil and natural gas anywhere in the world – by far!”

And he feels rather sorry for those poor, misguided countries that don’t love fossil fuels.

“While many European countries struggle with crippling energy costs, the American energy revolution is saving American families $2500 every year in lowering electric bills in numbers that people said couldn’t happen.”

In the near-universally anti-Trump European media, all this will not doubt be seized on as further evidence of Trump’s unbridled capitalist insanity. Speaking for myself, though, it makes me ashamed to be European; ashamed to live in a once-great part of the world which has now chosen to squander its inheritance, in favour of hand-wringing, cringing gestures to the Green Goddess.

How cruelly apt that Trump should have concluded his diatribe by invoking the Duomo in Florence and Notre Dame Cathedral in Paris – two architectural masterpieces from an era when Europeans weren’t shackled by self-hatred, eco-guilt and pessimism.

“Today I hold up the American example to the world as a system of free enterprise that will produce the most benefits for the most people in 21st century and beyond.”

So true, so very true. And such a terrible tragedy that throughout Davos and in so much of Europe and the Western world beyond, those wise words will be ridiculed as those of a madman, while the idiocies spouted by leftist puppets like Greta Thunberg will be worshipped as holy writ.