VERDICT: FALSE. Morrison saw nothing illegal — or political — about the call.

He specifically noted Morisson, though Morisson testified in the House Intelligence Committee that he saw nothing wrong with the call.

Morrison testified that he approached a National Security Council attorney about the call because he was worried that it would be misused, politically, by the president’s opponents in Washington — a prediction that has come true.

Schiff acknowledged that Morrison did not think there was anything illegal about the call, but played a clip of his public testimony in which the Democrats’ staff counsel tried to pressure Morrison to offer something more useful:

GOLDMAN: But you would agree, right, that asking a foreign government to investigate a domestic political rival is inappropriate, would you not?

Note that Morrison did not agree with the Democrats’ characterization of the call. But Schiff presented it that way to the Senate during his presentation in the impeachment trial. Schiff knew he was lying to the Senate — because Tim Morrison told Schiff himself that he saw nothing political about the call, in his previous closed-door testimony: 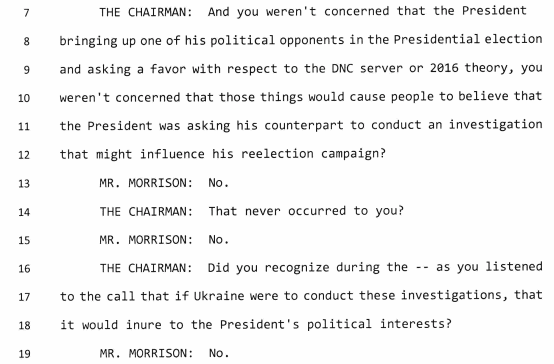 THE CHAIRMAN: That never occurred to you?

THE CHAIRMAN: Did you recognize during the — as you listened to the call that if Ukraine were to conduct these investigations, that it would inure to the President’s political interests?

Schiff lied to the Senate about what Morrison testified about his own impressions of the call, playing a selectively-edited video in which Democrats’ counsel used his own words, not Morrison’s, to describe his impression of the call.