After taking subtle shots at the “billionaires” in the Democratic presidential field — thus far, Tom Steyer and former New York City Mayor Michael Bloomberg — Warren praised other candidates, saying that it was “so wrong” that Sen. Kamala Harris (D-CA) had been forced to drop out of the race “on the same day that a billionaire bought his way onto the debate stage.”

The Democratic National Committee (DNC) recently dropped a debate rule requiring a minimum number of donors to qualify for the debate stage, allowing the self-funding Bloomberg to join the debate stage later this month in Las Vegas, Nevada.

Warren rallied supporters in a packed Rochester Opera House on the eve of the New Hampshire primary, hoping for a strong result despite flagging poll numbers in the state. 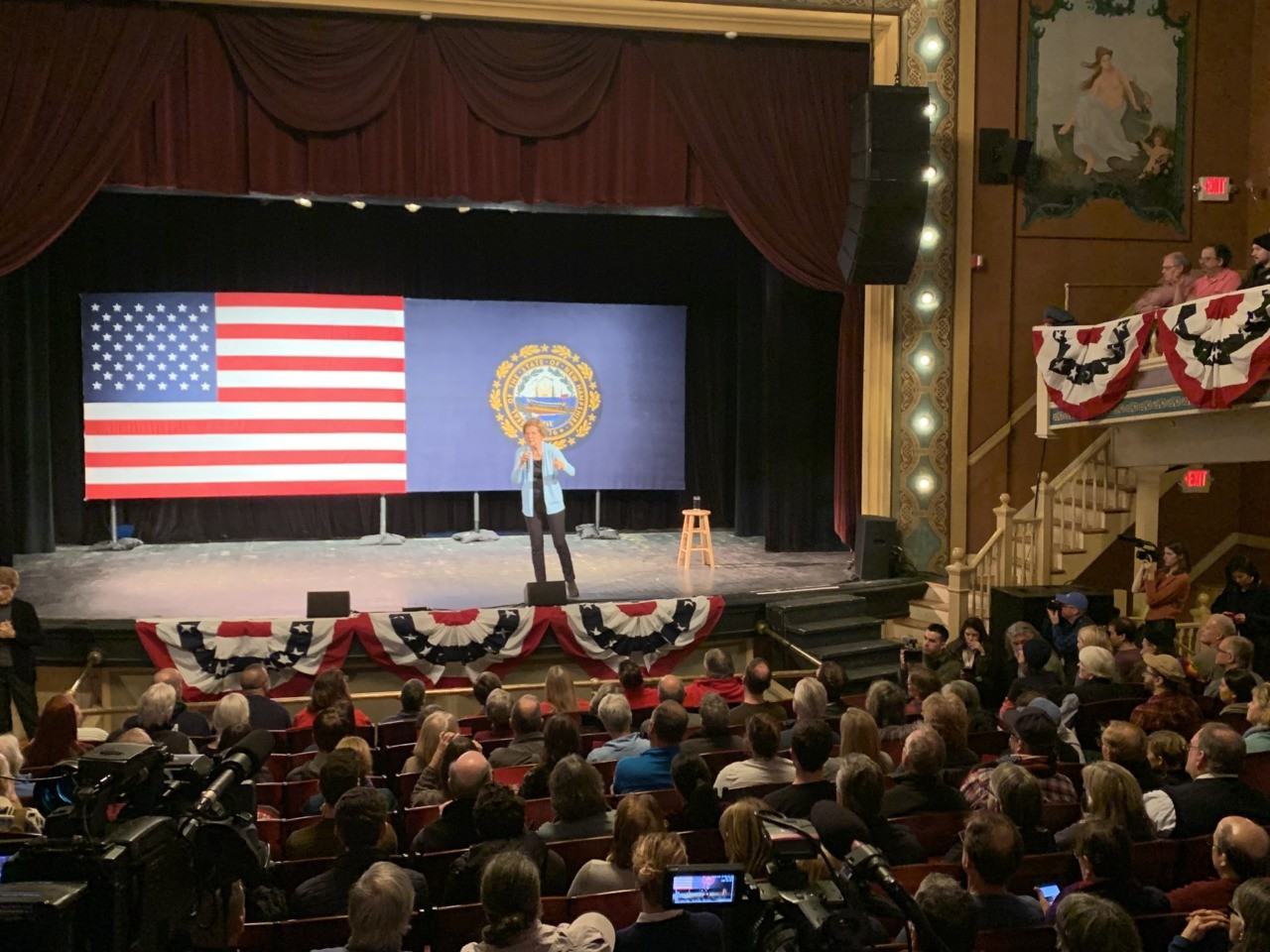 Warren led in New Hampshire after a successful town hall meeting in Franconia last August. That enabled her to challenge for the national lead against then-front runner Joe Biden, the former Vice President.

However, she later struggled to explain how she intended to pay for her “Medicare for All” plan — while Sen. Bernie Sanders (I-VT) declared openly that he intended to tax the middle class. (Sanders argues the benefits of free health care will outweigh the cost of paying for it for most middle-class families.)

A turning point came when Warren took direct aim at Sanders in the Democrat debate in Iowa last month, accusing him of telling her privately that a woman could not win the presidency. Instead of rallying voters to her cause, her attack — boosted by the CNN moderators — appeared to help Sanders, who denied it.

In New Hampshire, Warren repeated familiar talking points from her stump speech, virtually unchanged since the summer and from her talking points in debts. Supporters waved red signs that read: “Vote to End Corruption.”

During the question-and-answer session, staff drew raffle tickets from a bowl; the winners were asked to shout “Persist!” before proceeding to the microphone at the front of the room to ask their questions.

Asked about electoral reform to end gerrymandering, Warren said she wanted to abolish the Electoral College. Asked about how to counter President Donald Trump’s positive messages on the economy, given health economy growth and low unemployment, Warren spoke about the merits of a 2% wealth tax on wealth above a $50 million threshold.

Warren also spoke about the need to pay for child care and early education, particular for special needs children. She herself worked as a special needs teacher in a public school before becoming a lawyer.

“Fight back!” she exhorted the audience. “Fighting back is an act of patriotism!”

Supporters said they were impressed by the speech. One, a retired schoolteacher from Maine who came to New Hampshire to canvas for Warren, told Breitbart News: “Her story is my story … She gets it. She’s real. She inspires me.”

Alexander, a local voter, told Breitbart News on the way out of the speech that he was actually a Trump supporter but was interested in the Democratic Party candidates.

Asked if he could vote for any of them, he said: “Probably not.” However, he added that he found Andrew Yang interesting.