A poll surveying the Catholic 2020 vote in America finds that while President Donald Trump is in a slightly stronger position among Catholics than he was in November, he still trails behind the Democrat candidates.

Results of the second of four polls by EWTN News/RealClear Opinion Research find Catholics are also sharply divided in their views of the election according to how they view the teachings of their Church.

The poll finds 47 percent of all Catholics approve of Trump’s job performance, up from 44 percent in the last poll.

Among all Catholics surveyed, 34 percent now say they will vote to re-elect Trump, with 12 percent stating there is a good chance they will vote for him.

However, 36 percent say they will never vote for Trump, with 10 percent stating it is unlikely they will.

Any encouraging results for Trump, however, are tied to Catholics who are committed to their faith. Among devout Catholics, 63 percent approve of Trump, with 59 percent planning to vote for him this year and 8 percent stating it is likely. 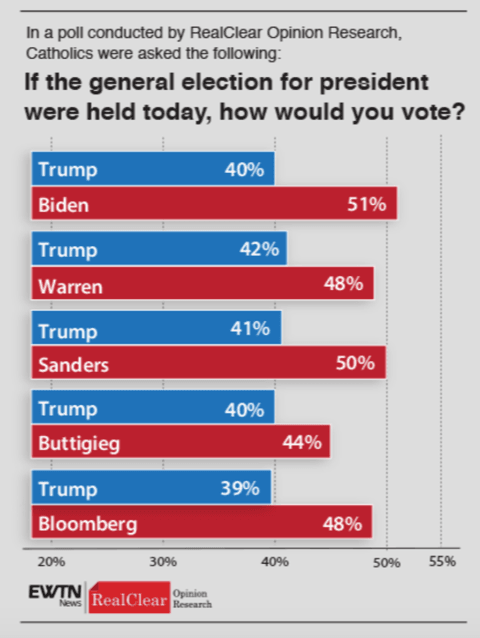 In a hypothetical match-up between Trump and Democrat Joe Biden, Trump would receive 40 percent of the Catholic vote, while Biden would receive 51 percent, according to the poll.

Among all voters who identify as Catholic, Mike Bloomberg would win over Trump, 48-39 percent, and Pete Buttigieg would top him, 44-40 percent.

The poll reaffirmed that any survey of the Catholic vote must consider the significant discrepancies among Catholics who accept all of the Church’s teachings, those who are selective in terms of which teachings they follow, and those who claim to be “Catholic,” but also say their faith is not a major focus of their lives.

“Our second poll confirms even more starkly what we learned in the first—that the Catholic vote is certainly not a monolith, and one of the most important predictors of a Catholics’ vote is the degree to which they accept Church teachings,” said John Della Volpe, director of polling at RealClear Opinion Research. “In turn, this can help us gauge where they fall on both political and social issues, although there were definitely some unexpected results that we plan to explore further in the next poll.”

Matthew Bunson, executive editor and Washington Bureau Chief at EWTN News, wrote at National Catholic Register, that this most recent poll is “a diagnosis of failure in articulating Church teaching clearly and effectively to Catholics on such vital moral issues that involve intrinsically evil acts – abortion, euthanasia, and assisted suicide.” 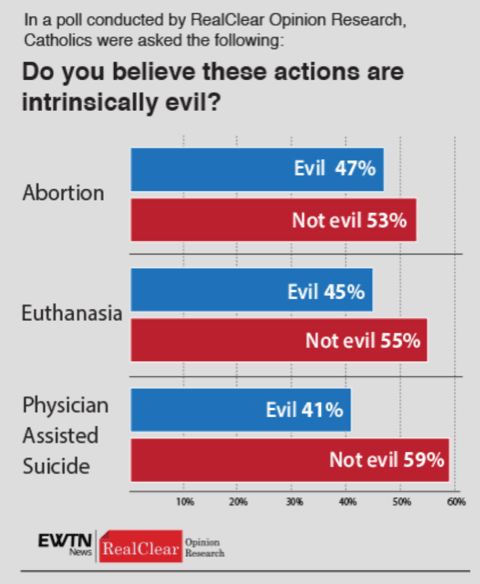 A shocking outcome of the first poll found only 49 percent of all Catholics believe in the real presence of Jesus in the Eucharist.

In this latest poll, 53% of all Catholics say abortion is “not intrinsically evil,” as the Church teaches, and 51 percent say it should be legal, with 44 percent saying abortion should be illegal.

Among active Catholics, only 56% say abortion should be illegal.

Despite the wide differences in political views among Catholics, which appear to be tied to their level of devotion to the beliefs of their faith, Bunson said devout Catholics, along with Evangelicals, represent one of Trump’s “most steadfast bases of support.”

“This means they remain vital to his re-election hopes, and he cannot win in 2020 without them,” he said, explaining:

In an election in which turnout might be decisive, 58% of Catholics say they vote all the time in major elections. This is notable, but among devout Catholics that number is currently at 75%. With months yet to go until the election, devout Catholics right now at least are poised to become that much sought after but seemingly ever elusive solid Catholic vote.

The poll of registered voters identifying as Catholic in the United States was conducted online in both English and Spanish. The sample size was N=1,521 with a credibility interval of +/- 2.77 at the 95% confidence level.