As the world grapples with the unique medical challenges presented by the coronavirus outbreak, Australians are instead fighting over toilet paper supplies with reports of one angry customer drawing a knife in a supermarket to secure her share.

Local retail outlet Woolworths said the restriction of four packs of toilet paper per person are being strictly applied, “to ensure more customers have access to the products”.

Hand sanitisers will also be sold from behind the service counter and restricted to two per person as Australians look to keep themselves and their household surfaces clear of infection.

“It will help shore up stock levels as suppliers ramp up local production and deliveries in response to higher-than-usual demand,” the company said in a statement.

Police in the biggest city of Sydney were called to a Woolworths supermarket Wednesday over reports that a man and woman had been fighting over toilet rolls. 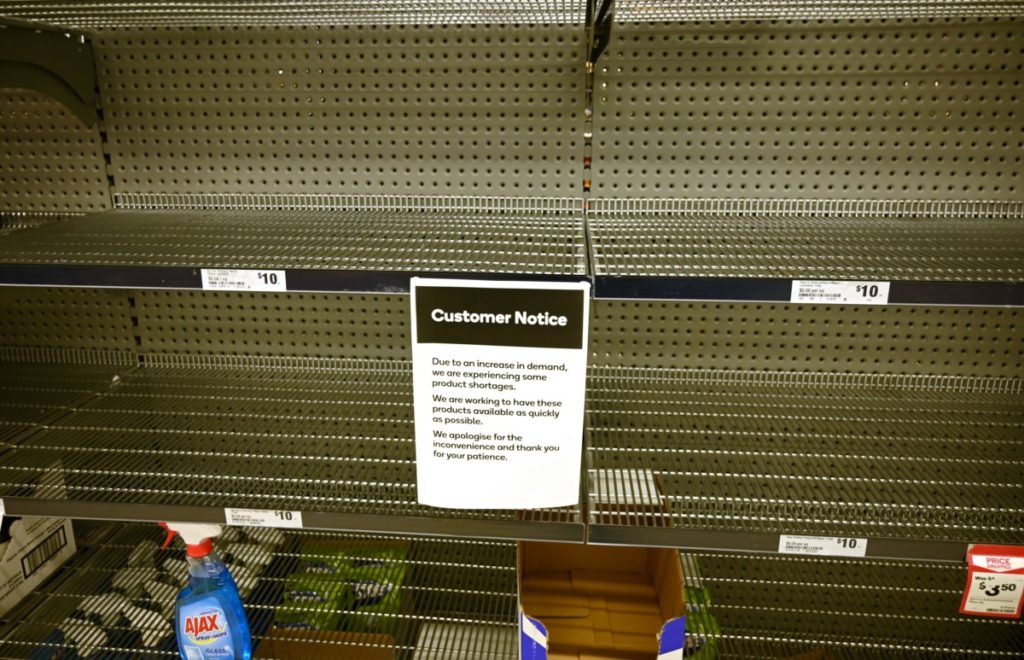 Shelves are empty of hand sanitiser in a supermarket in Sydney on March 4, 2020. – Australia’s biggest supermarket announced a limit on hand sanitisers and toilet paper purchases after the global spread of coronavirus sparked a spate of panic buying Down Under. (PETER PARKS/AFP via Getty Images)

Officers swarmed the area after the supermarket worker told them one of the people involved was carrying a knife and threatening to use it, AFP reports.

No injuries were reported in the melee and a woman was spoken to by officers who attended the scene. A witness told Daily Mail Australia: “There was a fight over toilet paper – you could hear a commotion coming from down the end aisle.

“There was a knife pulled and the people started running around. It was all over in a few moments, security were here and police came and talked to a woman.”

Footage from another branch of the supermarket showed people desperately running for the toilet paper aisle in what was described as a “stampede.”

Australia has reported 43 confirmed cases of the virus, including one death.

Prime Minister Scott Morrison said he had spoken to the country’s two major supermarket chains — Woolworths and its rival Coles — about their response to panic buying.

“I can understand why people may be concerned, and go to supermarkets, and do those sorts of things. But the advice is that’s not necessary,” he told 2GB Radio on Wednesday.