The U.S. Immigration and Customs Enforcement agency is reducing the number of migrants in detention as China’s coronavirus spreads through the agency’s many holding centers.

ICE’s reduction in detainees spotlights the sharp drop in new arrivals at the border and the accelerating return of migrants to their home countries — including in Africa. But it also comes as officials temporarily reduce the detention of non-criminal illegal migrants living in the interior of the United States.

The reduced population of detained immigrants may help the administration’s lawyers fend off a wave of lawsuits by the pro-migration groups who are seeking to release any migrants. On April 6, for example, a pro-migrant group sued for the release of migrants held in New Jersey’s Essex County Correctional Facility and Elizabeth Detention Center:

“There are almost 40,000 people in immigration detention and all of them are at risk as long as they are detained,” said Hardy Vieux, vice president, legal, at Human Rights First. “The lawsuit we are filing today is a response to the lack of action on behalf of ICE and the Trump Administration. If the government will not take steps to protect the lives of these immigrants, we will.”

Judges have directed the release of some detained migrants, but the administration has won several court victories to block the release of other migrants. However, the legal assaults are well funded and are backed up by lawyers provided for free by elite law firms.

Immigrants Sue to Be Freed from ICE Custody During Coronavirus Crisis https://t.co/EYB4eFeK7T

“There have been 13 confirmed cases of COVID-19 among those in ICE custody,” plus seven cases among ICE employees and personnel, according to the agency.

But the Miami Herald reported April 6 that there are additional cases in ICE’s network of contractor-run detention centers::

Two employees who work at the Krome detention center, the U.S. Immigration and Customs Enforcement facility that houses immigration detainees in Miami-Dade, tested positive for the coronavirus, ICE officials confirmed.

The staffers, who work for Akima Global Services, the government contractor that operates the facility for ICE, were confirmed to have tested positive on Monday by the federal agency.

“Two ICE contracted employees at the Krome Processing Center have tested positive for COVID-19,” an ICE official told the Miami Herald on Monday. “The AGS employees are self-quarantining at home.”

The gradual decline in the population is tracked by the Transactional Records Access Clearinghouse, a research organization at Syracuse University:

Starting from a low of 25,780 in March 2015 to a high of 55,654 in July 2019, before falling currently to 38,058. Throughout this period, however, the growth in the number of ICE detainees has been driven virtually entirely by detainees with no record of a criminal conviction, which likely includes many recently arrived asylum-seekers. 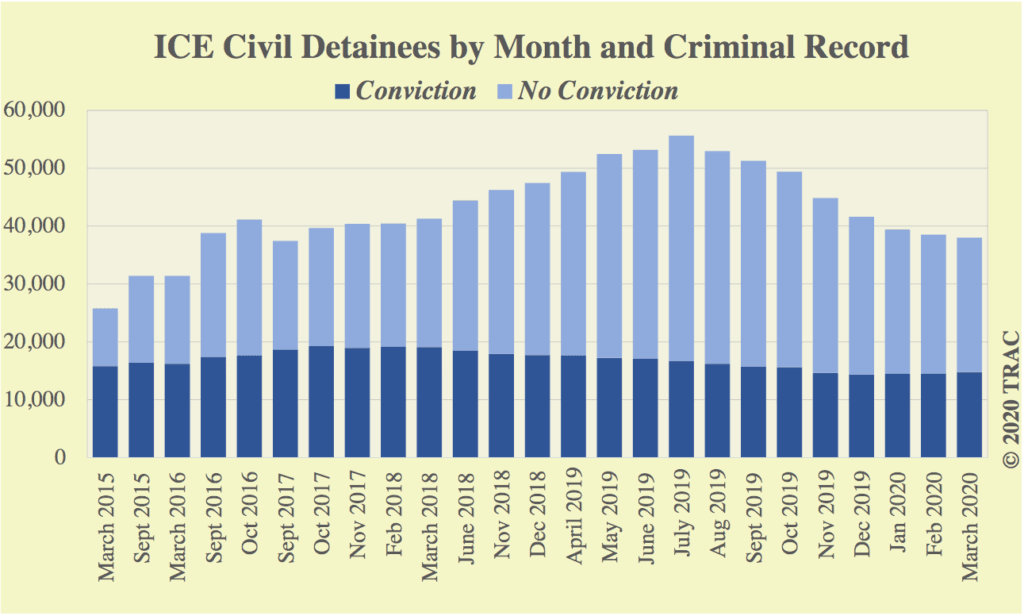 Fewer migrants are arriving at the border because President Donald Trump’s reforms and diplomacy allow officials to return migrants to Mexico and Guatemala quickly.

The agency is also stepping back on enforcement operations, partly to avoid sending disease-carrying migrants into the detention centers. The agency announced the reduced intake March 18, saying:

ICE Enforcement and Removal Operations (ERO) will focus enforcement on public safety risks and individuals subject to mandatory detention based on criminal grounds. For those individuals who do not fall into those categories, ERO will exercise discretion to delay enforcement actions until after the crisis or utilize alternatives to detention, as appropriate.

The number of migrants in detention rose by 700 in the mid-March, according to Buzzfeed.com:

The detainee population in ICE custody has expanded over the past week by more than 700 in the past week, per statistics posted on the agency's website.

Advocates in recent days have called for the agency to release detainees who are elderly & have underlying medical issues. pic.twitter.com/JMyvav3GmF

The migrants are detained in roughly 220 centers all around the United States. 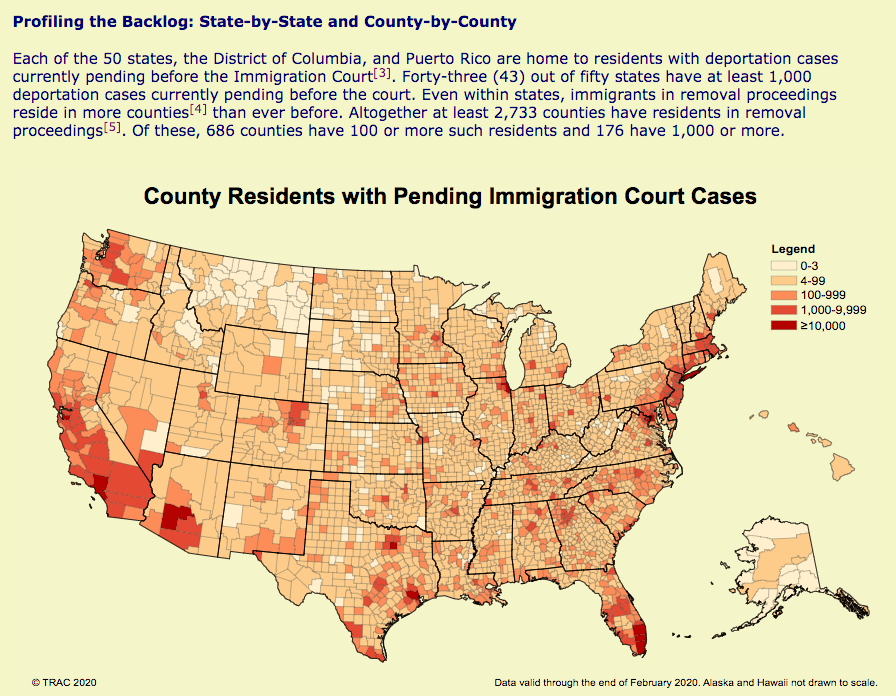 According to a report at TRAC:

Back in 2017, 111 counties in 39 states had this many pending cases. Today there are 43 states and a total of 176 counties with at least 1,000 or more residents currently waiting for their day in Immigration Court. See Table 1.