Over one hundred years ago, a pandemic gripped the world. Caught in that plague was a sailor who had to choose between his life and his ship.

In 1918, World War I raged. But deadlier than German bullets, the savage pandemic, later known as “Spanish Influenza,” took the lives of more American soldiers and sailors than the number who died in battle. Worldwide, half a billion people contracted the illness, and approximately fifty million perished as a result.

Most strains of the flu are more dangerous to infants and the elderly, but the 1918 epidemic was hardest on young men and women in the prime of their lives—exactly the age group that nations were sending to the front lines of the war. Many patients developed severe pneumonia, which often caused their cheeks to turn blue as they struggled to breathe. Large numbers of those who died “drowned” slowly in their own phlegm as the virus ravaged their lungs.

The close confines of barracks and transport ships proved to be the perfect breeding grounds for the devastating disease, presenting President Wilson with a thorny decision. General Pershing was begging for troops to replace the 150,000 American soldiers in Europe who had contracted the illness, but crowding men onto ships would certainly sentence thousands of them to death, as well. On the other hand, halting the flow of American troops might provide the Germans the advantage required to win the war.

Army Chief of Staff Peyton March assisted the president in making his decision. “The shipment of troops should not be stopped for any cause.” The transport ships maintained their relentless crawl across the Atlantic, and thousands of young doughboys met their fate before ever seeing the shores of Europe or on their way home. One such ship that brought infected Americans to Europe and now brought hundreds of men afflicted with the Spanish Flu home was the Mount Vernon. But life on board the ship was about to get much worse in the first week of September 1918. 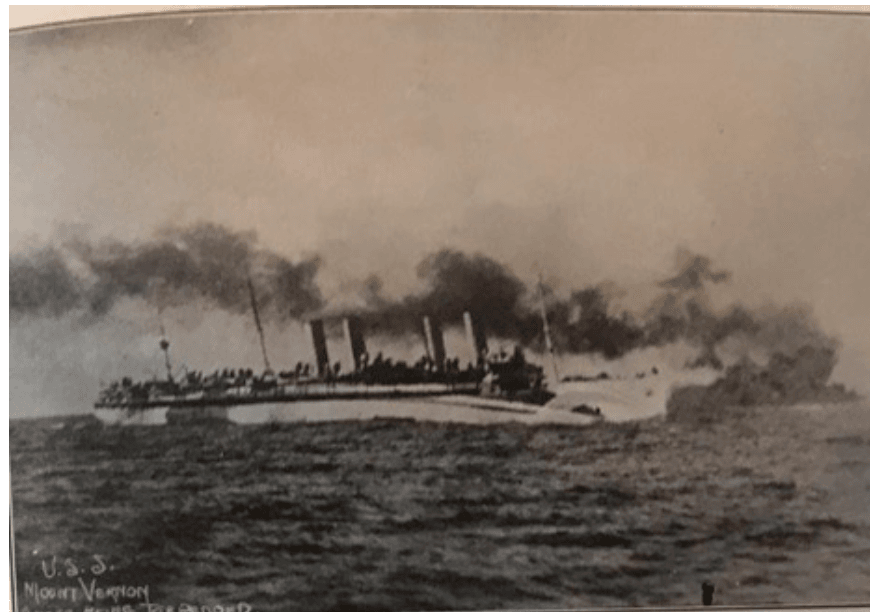 On the clear morning of September 5, 1918, a rainbow, a sailor’s warning for veteran mariners, arced across the dawn sky. Most of the passengers on board Mount Vernon had been seriously wounded in combat or had contracted influenza. They were focused on the voyage back to the United States and the opportunity to see their families and sweethearts, ignoring the foreboding sign. Having finished her seventh voyage transporting troops across the Atlantic, the ship was headed home. Belowdecks, it seemed like any other morning for Charles Leo O’Connor. He had just relieved his counterpart, who had been on watch from 4:00 a.m. to 8:00 a.m. in the No. 8 fire room—another routine day.

O’Connor had one of the dirtiest jobs in the Navy: tending the fires and boilers in the mighty ship’s engine room. The Navy sailor toiled in intense heat as he shoveled black, dirty nuggets of coal—into the blast furnace–like engines of the troopship.

Everything changed when a massive explosion suddenly rocked the vessel.

O’Connor fell to the deck, “instantly enveloped and almost fatally burned in the flame of gases driven from the furnaces.” The high pressure of the boiler room forced a sheet of fire into the compartment. As the power cut out, the overhead lights went dark. A shower of scalding coal dust and debris rained down on his head, scorching his body as the searing heat burned his throat and lungs. Before he could catch his breath, a torrent of seawater rushed into the compartment.

A torpedo had struck Mount Vernon amidships, not far from O’Connor’s position. Thirty thousand tons of metal were lifted, twisted, cracked, and bent from the explosion. Tons of water rushed into the ship. Within minutes, Mount Vernon, sinking fast, dangerously rode ten feet below her normal waterline. Fatefully, the explosive had struck some of the fire rooms and boilers, where the stores of coal compounded the force of the blast.

O’Connor knew that his chances of further survival were slim. Far below the waterline, the fire room was a death trap. At any second, the remaining intact boilers on Mount Vernon could explode. But rather than escape, he immediately set about doing whatever he could to save the ship. Staggering in the swirling water, he struggled to his feet and turned to close a watertight door leading to a large coal bunker behind him. If the compartment filled with water, the ship would capsize.

O’Connor’s story is captured in my national bestselling book, The Unknowns: The Untold Story of America’s Unknown Soldier and WWI’s Most Decorated Heroes Who Brought Him Home.

O’Connor pulled on the hydraulic lever to close the watertight door.

The water tender’s valiant efforts later awed the captain of the Mount Vernon, “The fact that O’Connor, though profoundly stunned by the shock and almost fatally burned by the furnace gases, should have had presence of mind and courage to endeavor to shut this door is as great an example of heroic devotion to duty as it is possible for one to imagine.” Taking the time to close the door resulted in painful injuries and scars, which O’Connor would bear for the rest of his life. However, his self-sacrifice very likely saved the ship and the lives of his fellow crewmembers.

The human carnage caused by the torpedo was unmistakable. The wounded, such as O’Connor, suffered horrendous burns, and several sailors lost limbs. Scores of lifeless bodies remained entombed in the watertight compartments filled with seawater. The explosion killed thirty-five men immediately and injured thirteen, two of whom later died of their injuries.

The torpedo attack and its aftermath were not the only dangers affecting the sinking ship. Mount Vernon was a plague ship; influenza threatened the lives of those on board, including the Navy officers and crew. In addition, more than a hundred Army personnel had contracted influenza during the voyage to Europe and remained behind in the ship’s sickbay on the return. And the virus continued to spread after the torpedo strike.

With a plague raging internally, men, some sick, went to work in damage control parties to shore up the ship’s damaged hull. Men pumped water, shored up bulkheads, and reinforced hatches and doors. Several officers heaped praise on the crew for their behavior during the encounter. “What the men did afterwards saved the ship,” one recalled. “Very few orders were necessary.

Above the waterline, the Captain ordered the ship’s deck gun to fire on the submarine and men sent depth charges overboard as they continued sailing in a zig-zag path. All hands knew no ship had ever survived two direct hits from U-Boat torpedoes.

Severely burned and near death, O’Connor lay in sickbay, near the infected men battling influenza. Undoubtedly, he recounted his life. He had enlisted on March 10, 1913, at the age of twenty-six, and served for four years. Now his life hung by a thread. Defying all the odds, he survived.

Safely making it back to the French port also presented the captain with an opportunity to express his thanks to the crew. He called out O’Connor specifically, noting, “The entire crew has acted manfully, as Americans are expected to act in the time of danger….This devotion to duty unquestionably saved the ship from a second and perhaps fatal attack.” “[O’Connor] in the face of death and badly wounded did actually forget, or at least held in abeyance, his instincts for self-preservation and endeavored to do what appeared to him to be his duty.”  For his voluntary heroic conduct in battle Charles L. O’Connor, Chief Water Tender, US Navy, was recommended for the Medal of Honor. O’Connor later had the honor of bringing home the remains of America’s Unknown Soldier to Arlington.

Patrick K. O’Donnell is a bestselling, critically acclaimed military historian and an expert on elite units. He is the author of 12 books including The Unknowns: The Untold Story of America’s Unknown Soldier and WWI’s Most Decorated Heroes Who Brought Him Home and Washington’s Immortals. He is also the host of THE HISTORY HAPPY HOUR via Zoom, open to the public, with dates and links posted on Twitter @combathistorian. O’Donnell and his cohosts recently conducted a live interview with the last surviving WWII Ranger officer who fought on Omaha Beach. PatrickkODonnell.com