The nation’s largest teachers’ union says many of its members are so anxious about returning to school that some are preparing with “living wills and life insurance.”

According to NEA Today, the news outlet for the National Education Association (NEA), “anxious educators have a message for administrators and lawmakers: ‘We want to teach our students, but we don’t want to die doing it.’”

“It’s a false choice to keep schools closed and stop learning, or to open unsafely,” Garcia added. “There are places all over the country, in fact all over Florida, that are planning very creative ways to deliver education safely.”

The Florida Education Association (FEA), a local affiliate of the American Federation of Teachers (AFT), filed a lawsuit last week against DeSantis, seeking to block his administration from reopening the state’s public schools.

However, in May, AFT President Randi Weingarten also admitted to the USA Today editorial board that distance learning, another option some school districts are utilizing as an alternative to in-classroom instruction, “is something that we all know has not been good for kids.”

Weingarten noted teachers have “worked really hard” to be flexible to do remote teaching during the coronavirus school closures, but said online education “is not a substitute for the relationship building and the alchemy that happens in schools and in classrooms.”

She added perhaps “a kid or two” will do well with virtual learning, but dismissed it as an acceptable education mode.

In an interview with Vice, Garcia continued that teachers are calling upon the union for legal assistance:

‘Panicked’ is not too strong a word to describe what they’re feeling. They are panicked and calling to ask ‘Does the NEA have any advice to put in place a will? Do you have any last will and testament forms? Because I don’t trust my governor, and I think I’m being sacrificed.’

Ironically, teachers’ unions have typically stressed how much public schools are doing to help children from low-income families, even to the extent of providing them with meals during the shutdowns.

The same lower-income children are struggling with greater learning loss during the school closures, a situation that is likely to be exacerbated if in-person learning does not resume.

Democrat presumptive presidential nominee Joe Biden, who has been endorsed by the teachers’ unions, has said it is “just plain dangerous” for American children to return to school this fall, despite the opinions of numerous physicians to the contrary.

“COVID-19 has the unusual feature that children seldom either get sick from it or transmit it to others,” wrote Dr. Jane Orient, executive director of the Association of American Physicians and Surgeons.

The CDC reported 14 deaths involving COVID-19 in children age 5-14 between Feb 1 and Jul 11. There were 2,173 deaths from all causes in that age group in a population of 41 million. As seen in the graph below, deaths in older age groups rose sharply after Mar 21, reaching a peak on Apr 18, and have been declining since. A recent surge of “cases” (positive PCR tests) has not so far caused a bump in deaths, which have returned to the baseline of expected mortality. By that metric, the pandemic is over. 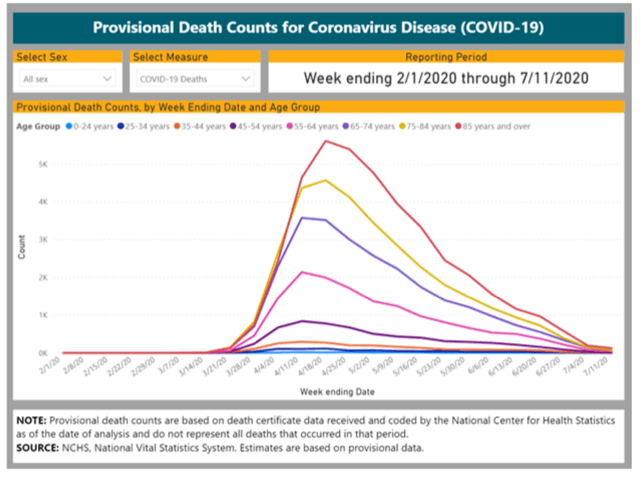 Orient explained that reports of “child COVID syndrome” are likely “Kawasaki disease, which has been associated with many viral syndromes.”

“There are about 5,000 hospitalizations per year attributed to this, and the number of cases has not been increasing,” she added.

Regarding anxiety concerning school reopenings, Orient asked, “But if it is not safe to re-open schools now, when will it ever be safe? Who will believe it is safe if children are forced to wear masks and stay 6 ft apart?”

Former Stanford University Chief of Neurology Dr. Scott Atlas also told Fox News recently that it is “just completely wrong, and contrary to all the science” to say it is dangerous to send children to school.

“I’m not sure how many times it has to be said, but the risk to children from this disease and the fatality is nearly zero,” Atlas, now a senior fellow at the Hoover Institution, told The Story host Martha MacCallum.

“The risk of children for a significant illness is far less than from the seasonal flu … This is totally antithetical to the data,” he said. “Obviously, we know this by now, it’s been confirmed all over the world, children rarely transmit the disease to adults.”

According to a report at Science, more than 20 countries affected by the coronavirus pandemic sent their children back to school by early June.

Countries such as Taiwan, Nicaragua, and Sweden never even closed their schools, the report noted.