Florida GOP Sen. Rick Scott may be a secret agent for China, says a website registered by Immigration Voice, a group trying to put hundreds of thousands of India’s H-1B contract workers on a fast track to green cards and citizenship.

The group is managed by immigrant Indian-Americans, and it has focused its fury on Scott since he blocked the Unanimous Consent passage of the S.386 bill on August 5. The bill is championed by the group and Utah GOP Sen. Mike Lee, and it would dramatically expand the number of India’s contract workers who can get green cards and work permits in the United States.

“Senator Rick Scott likes to say that he is an “America First” Conservative, but the truth is he is either a Chinese puppet, a milquetoast “Diversity” loving liberal or both – a liberal Chinese puppet in the U.S. Senate who is also an America hating liberal?” says the group’s message on their website, truthaboutrickscott.us.

“Is he a communist agent who is just following party instructions from the politburo in Beijing?” the website says. 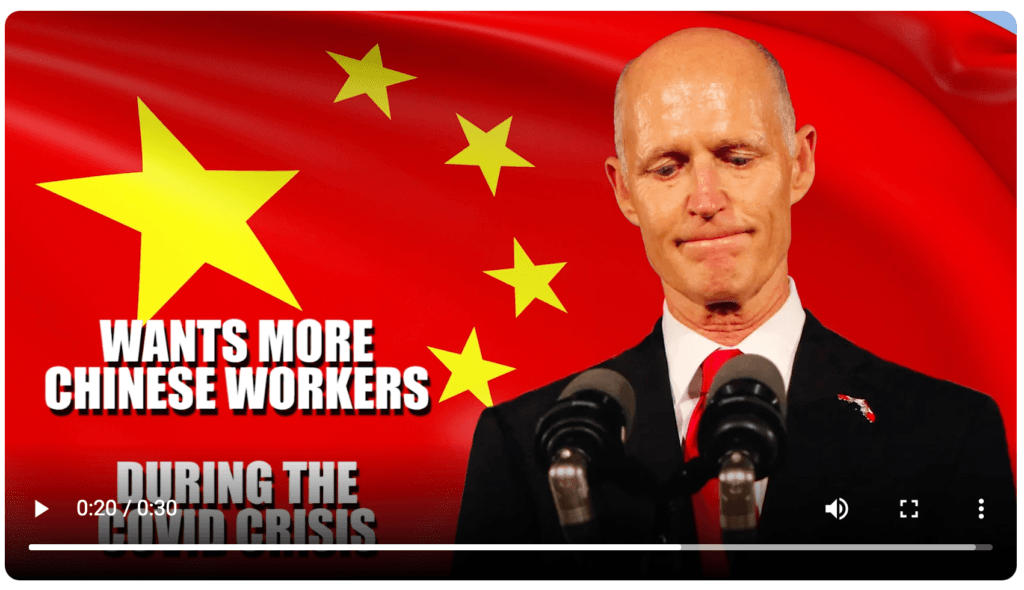 Sen. Scott’s surprise action to block the bill won him applause among the growing number of Americans and would-be immigrants who fear S.386 will radically change U.S. immigration policy to favor outsourcing by Fortune 500 companies.

But once Scott blocked the bill — partly to protect the immigration of Spanish-language speakers — the Immigration Voice group quickly posted a tweet of Scott in a KKK hood.

The Indian group’s hard edged tactics are unsurprising because the group also spent much of 2020 claiming Sen. Richard Durbin, D-Ill., is a “racist” and an “ethnic cleanser for opposing S.386. This August, Durbin dropped his opposition, and some of the group’s members claimed their tactics successfully pressured him to change his mind.

Amid the criticism of Durbin, the group’s Democrat-affiliated legal advisor, Leon Fresco, broke his ties with the lobby team.

On June 1, Scott Corley, the group’s high powered corporate lobbyist, cut his ties by filing a “termination report” with the Congress.

However, Corley — a former top lobbyist for Microsoft — continues to push for S.386 on behalf of Intel Corp. (which employs many Indian workers) and the Compete America coalition. The Compete America coalition includes Microsoft, Google, Amazon, and Facebook, the immigration lawyers association, university groups, and the U.S. Chamber of Commerce. Most of the coalition’s firms hire visa workers in place of experienced American professionals.

The Fortune 500’s stealth campaign to pass the S.386 legislation is rarely mentioned in the establishment media, such as Jeff Bezos’ Washington Post.

Under President George W. Bush and then Barack Obama, federal agencies — not Congress – created a quiet pathway for an unlimited number of foreign workers to take temporary jobs in the United States, regardless of willing Americans or unemployment numbers. The pathway is the “Practical Training” work permit offered to foreign graduates of U.S. universities. Many foreign graduates use this pathway to work in the United States for three, six, or even eight years.

This growth of this huge cheap labor, guest worker program — roughly 400,000 foreign graduates per year — has been slowed because foreign graduates know they have little chance of quickly getting the green cards they need to stay in the United States.

They have little chance because the federal government provides just 140,000 green cards to workers nominated by U.S. companies, and also sets a national cap of around 2o,000 for people of each country. Those numbers are large compared to the American population — but they are a fraction of the many millions of foreigners who would work low wage jobs to get U.S. citizenship for themselves and their children.

But there are two huge loopholes in this process: Congress does not cap the ability of U.S. employers to nominate workers for green cards each year, and, once nominated, the supposedly temporary foreign graduates can work for many years while they wait for green cards.

The result is a massive resident workforce of at least 1.3 million visa workers in the hidden Green Card Economy. That population includes at least 600,000 Indian workers, most of whom hold H-1B visas, who continue to work and wait for the green cards, even though they know that only about 20,000 Indians can get green cards each year under current rules. The population is expanded by the presence of at least 300,000 Indian spouses and children.

This huge workforce of bonded-labor — and the corporate reliance on foreign workers — creates risks for Americans’ privacy, free speech, and national security. It also encourages workplace discrimination by foreign managers, damages the workplace clout of U.S. professionals, and helps to concentrate technology and wealth into a few hands.

There are so many Indian workers in the Green Card Economy they have formed several groups to lobby Congress for changes to the long-standing rules. Their primary goal is the removal of the pro-diversity “country caps,” so allowing roughly 100,000 Indians to get green cards each year, up from 20,000 per year now.

By removing the country cap, Lee’s bill will help the Fortune 500 recruit yet more of India’s many workers for jobs in the Green Card Economy.

Green cards are hugely valuable because they allow foreigners to live and work anywhere they want in the United States, and also to become citizens in just five years.

The green card lite status would also be hugely valuable because it would free foreign contract workers to live and work anywhere they want in the United States while they wait for the real green card.

So this new status — sometimes called “Early Filing” — would also allow the Fortune 500 and its various staffing companies to recruit millions of foreign graduates for low-wage white-collar jobs in exchange for a green card lite in perhaps seven years.

“That’s a game changer from the original bill,” said a tweet from a top-ranking immigration lawyer Greg Siskind. It gives people “most of the benefits of a green card,” said Siskind, who is working with hospital chains to expand the pipeline of foreign nurses and doctors into U.S. hospitals.

The new legal status allows foreign contract workers “to be able to stay in the country legally, travel abroad, and change jobs while their green card application is pending,” said an August 5 tweet from Leon Fresco, an immigration lawyer who helped craft the 2013 “Gang of Eight” amnesty and cheap-labor bill.

In effect, Lee’s bill would be a left-right combination punch by the Fortune 500 against American graduates: First by enabling companies to hire more foreigners to take their jobs, and secondly, by paying the foreign workers with a slice of Americans’ valuable right to their American-only labor and housing markets.

So far, only Sen. Scott of Florida has blocked this huge change in American labor law — and Breitbart News is the only media outlet to cover the dramatic developments.

Yet the Immigration Voice group is using Internet advocacy and Twitter to slam Scott’s job saving intervention as a pro-Chinese and anti-American move that somehow reduce protections for American graduates.

@SenRickScott needs to follow footsteps of @realDonaldTrump and act tough on China.

President Trump closed the Chinese consulate in Houston because of their anti-American activities. China imposed sanctions on patriotic American lawmakers who criticized China, but Rick Scott wants to remain friends with China. He’s also blocking S.386, so the U.S. can allow 18,000 more Chinese immigrants to enter the US during the COVID crisis. Remind Rick Scott he is the senator for Florida, not China. Demand to pass S.386.

The S.386 bill is strongly backed by the Indian government, which hopes to grow India’s economy by trading India’s workers to the United States via the U.S.-India Outsourcing Economy.

On August 30, some of India’s contract-worker held a protect in Orlando, Fla., complete with signs comparing their employment-contract problems to anti-black racial discrimination.

Who do you think can help the mayor of Portland?

Someone with a degree in Master of Language in

A growing number of American professionals are organizing to protect their jobs, via such as groups as U.S. Tech Workers and NumbersUSA.