The following is an exclusive excerpt from Corey Lewandowski and David Bossie’s new book, Trump: America First: The President Succeeds Against All Odds.

When Dave heard the president was going to be grand marshal at the 2020 Daytona 500, he thought it’d be great for a couple of reasons. NASCAR’s most famous event of the year was what you’d call a “target-rich environment”—the organizers could have used a MAGA hat instead of a checkered flag and the crowd would have approved—big league. Be honest—it’s a 150,000-person Trump rally with very large engines. But for Dave, the opportunities he saw for the president extended far beyond the cheap seats. Twelve million people or so would be watching at home on Fox. Every one of them would stop everything when the boss uttered the words “Start your engines.” A towering American figure leading a legendary American event—those optics were something you cannot buy. 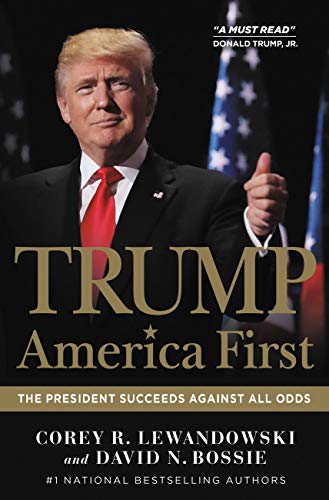 Presidential events like this can have a tendency to go sideways. More times than we could count, politicians, especially presidents and presidential hopefuls, have done more damage than good showing up at sporting events. In 1992, candidate Bill Clinton campaigned at the Darlington 500 and was resoundingly booed. The crowd at the 2009 Major League Baseball All-Star game jeered Obama big time in St. Louis….

But more than any man holding the office before him, Donald Trump knows his audience. On November 9, 2019, the president attended the much-anticipated University of Alabama versus Louisiana State University football game in Tuscaloosa at the Bryant-Denny Stadium. If you know college football, you know how big the Crimson Tide–versus–Tigers game is. And if you know Donald Trump’s fans, you can guess that there’d be more than a couple of them at the game.

Alabama is Trump Country and a special place in the history of the 2016 campaign. The first rally that really showed the world the force of the Trump movement took place in August 2015 at a football stadium in Mobile. More than 35,000 people packed the stadium… From that point on, Donald Trump could no longer be ignored. He shot all the way up to first in the polls and never looked back…

Daytona promised to be a day of opportunities for President Trump, and the campaign was hell-bent on squeezing his appearance at the famous track for everything it was worth. The White House put together some outstanding events for the boss that just seemed to get better as the day went on: a flyover by Air Force One with racing legend Darrell Waltrip on the plane; a TV spot of the president’s speech before he announced “Start your engines!” to begin the race; the roar of the air force Thunderbirds streaking over Daytona; a victory lap around the track in the presidential limo, appropriately known as “the Beast.”

You know, a real Trump-style appearance.

It hadn’t all come together on its own. Dave had been responsible for getting Waltrip onto Air Force One. A couple of days before the race, he received a text from John Davis, an old friend of his from Bob Dole’s 1988 presidential campaign. Davis asked Dave what he thought about putting the racing legend and the president together for the race. Dave’s response was a short one: “Hell, yeah!”

What could be better? Waltrip is beloved among by racing fans…Having Waltrip with the president at the famous raceway would generate great press—and set Twitter on fire. It just so happened that the day before the race, February 14, Dave and Corey had lunch with President Trump in the White House…Dave mentioned the idea to the Boss and, just as we’d thought, he loved it… Dave reached out to Mick Mulvaney and set the plan into motion. Mulvaney even came up with the idea of having Darrell drive the Beast, but the Secret Service wouldn’t let that happen. It would have been pretty cool, though.

That day, Dave was batting a thousand.

He’d been scrolling through Twitter the morning of the race when he’d come across a post by Hailie Deegan, a rising

young female star on the NASCAR circuit. “Today’s goal,” she wrote. “Get my helmet signed by Trump.”

“Oh, this is happening,” Dave thought. That would be a great visual for the president.

Dave…sent a text to Kimberly Guilfoyle and Don Jr., who he knew were traveling with the president to the race.

DM me… I may know someone.

Just as the race was starting, someone forwarded us Don Jr.’s tweet. It was a photo of the president, the first lady, Kimberly, Don Jr., and Hailie Deegan. The text above the photo read, and we kid you not, “Promises Made… Promises Kept.”

Corey R. Lewandowski and David N. Bossie are New York Times bestselling authors and close advisors to the president. Their new book is Trump: America First: The President Succeeds Against All Odds.