The anti-Trump Women’s March is underway in D.C. and in cities across the nation Saturday, as self-described feminists gather to protest both President Trump and his Supreme Court nominee Amy Coney Barrett.

“We’re holding socially distant actions across the country to send an unmistakable message about the fierce opposition to Trump and his agenda, including his attempt to fill Ruth Bader Ginsburg’s seat,” the Women’s March said in its official call to action.

NOW: Women's March returns to D.C. with 17 days to go before election… https://t.co/MYbtoAQdV2

A collection of anti-Trump signs have been spotted across the nation’s capital, including a lewd banner reading, “Trump is an unstable penis”:

Been here for 10 minutes and spotted a "Trump is an unstable penis" sign at the Women's March rally pic.twitter.com/GqK1eI6XRO

Signs reading, “Dump Trump and his gang of Putin,” “Free Melania,” “My favorite season is the FALL of the patriarchy,” and “Keep your rosaries off my ovaries” were also spotted in the crowds:

Women’s rights activists gathering in DC, cities around the country for a march in opposition to Trump and his Supreme Court nominee, Judge Amy Coney Barrett. Much smaller crowd than the Women’s March in 2017 – but then again, there’s a pandemic. pic.twitter.com/GiOCyrEnB6

This family came from Boston to attend the Supreme Court protests as well as today’s @womensmarch. Their mother says this is her daughter’s third #WomensMarch and her son’s second. #WomensMarch2020 @wusa9 #RBG #johnlewis pic.twitter.com/rn8TRsiRir

Join us in DC for the women’s march RIGHT NOW. Look for the handmaids @ freedom plaza, put on a costume (we have plenty) & join up w the #RefuseFascism contingent! #WomensMarch2020 #WomensMarch pic.twitter.com/hBjOw5oSKF

Crowd gathered at Freedom Plaza is predominantly white, markedly different from the diversity of the Floyd protests that happened across the city this summer. But Black women are here. #WomensMarch2020 pic.twitter.com/GUsnNTdGTN

The Women’s March is hosting rallies in DC, around the country today in opposition to President Trump and the confirmation of Judge Amy Coney Barrett. pic.twitter.com/5ewnukgaw7

Woman pretending to be "Melania Trump" at the #womensmarch pic.twitter.com/7vezrGGt4D

Similar scenes could be seen in cities across the nation:

We’re at the @womensmarch in Brooklyn. Come find us at Grand Army Plaza in from of the Brooklyn Public Library—stepping off soon! #CountOnUs #Persist #WomensMarch pic.twitter.com/vOJGyYHZCW

Hundreds gathered at Washington Square Park in NYC for the Women’s March…and with their voices and signs marched to Wall Street..fighting for women’s rights and equality. #WomensMarch #WomensMarch2020 #womensmarchnyc #WashingtonSquarePark @PIX11News pic.twitter.com/4moRCqwxkv

In addition to posters there’s also quite a few people dressed up in costume at the @womensmarch #WomensMarch2020 #WomensMarch @wusa9 pic.twitter.com/l6B86mWq0E

“No confirmation, ‘til inauguration!” Demonstrators are speaking out against the nomination of Amy Coney Barrett and want to encourage people to vote. The plan is to march to City Hall. #WomensMarch2020 @wbaltv11 pic.twitter.com/HYeyXJQk9o

HAPPENING NOW: About a dozen people are marching in Battle Creek for the #WomensMarch2020 to oppose the nomination of Amy Coney Barrett to the Supreme Court. They say they’re also advocating for the #BlackLivesMatter  movement and the LGBTQ+ community. @WOODTV pic.twitter.com/ZkqTZr7gqn 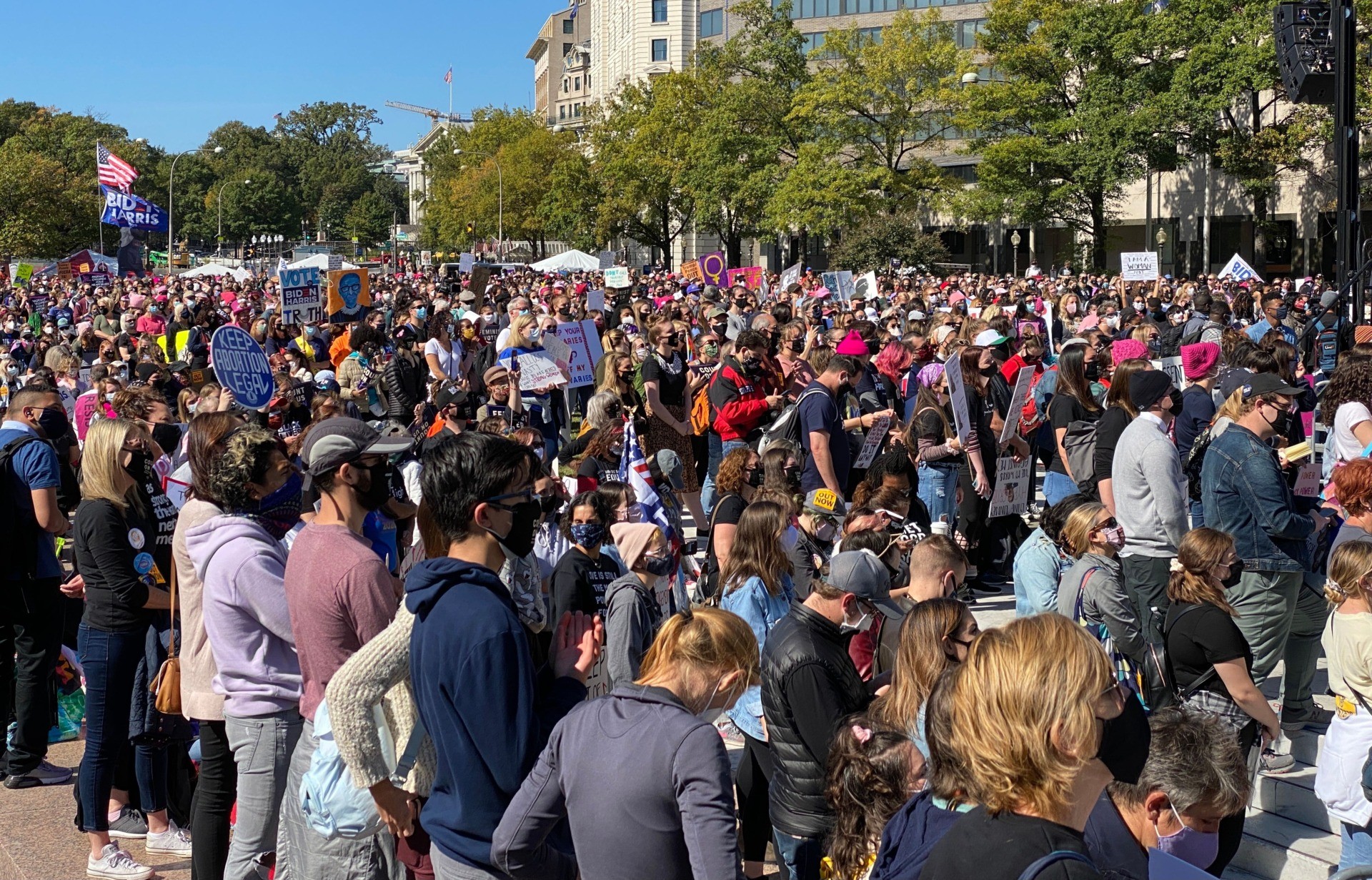 Demonstrators gather to take part in the nationwide Women’s March on October 17, 2020, at Freedom Plaza in Washington, DC. (DANIEL SLIM/AFP via Getty Images) 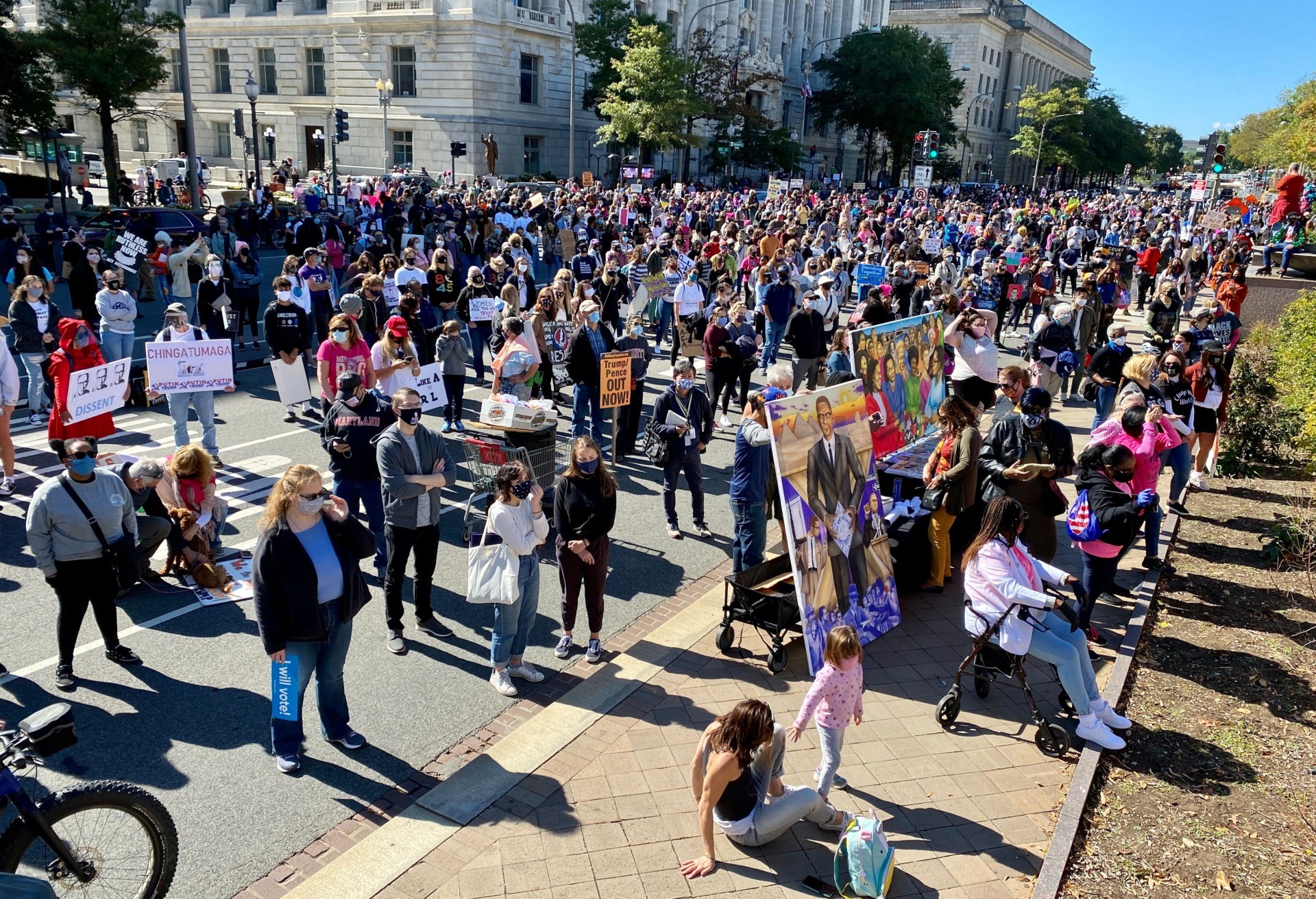 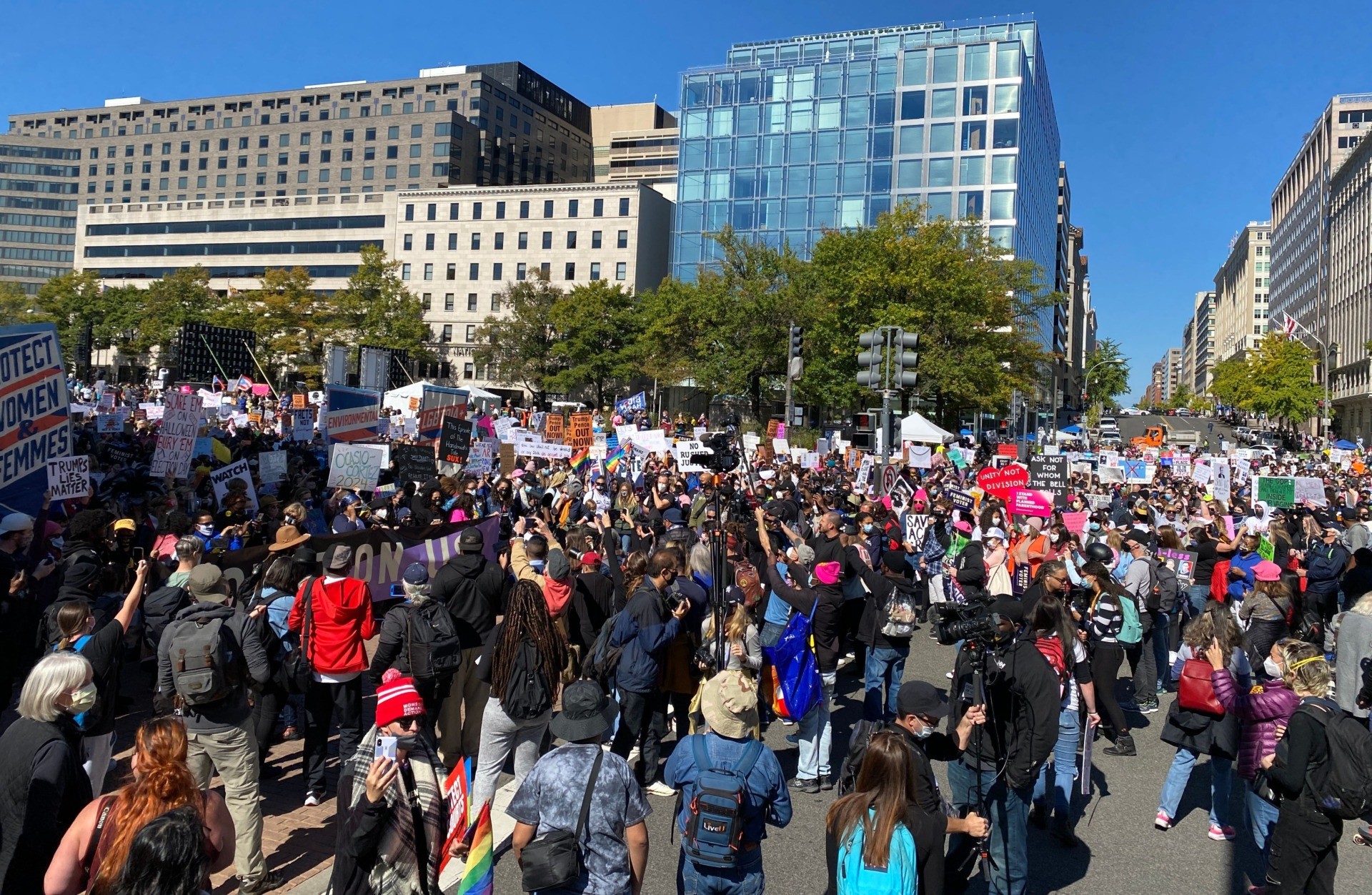 Notably, the official website of the Women’s March also states that it supports the Black Lives Matter movement’s call to defund the police, asserting that it is a “feminist issue” because “black, poor, immigrant and undocumented women are disproportionately targeted, abused and murdered by police.”