“The Proud Boys are trying to scare voters away from the polls,” the self-serving Never Trump grifters at the far-left Lincoln Project screeched on Twitter this week. “Let’s make them famous.” 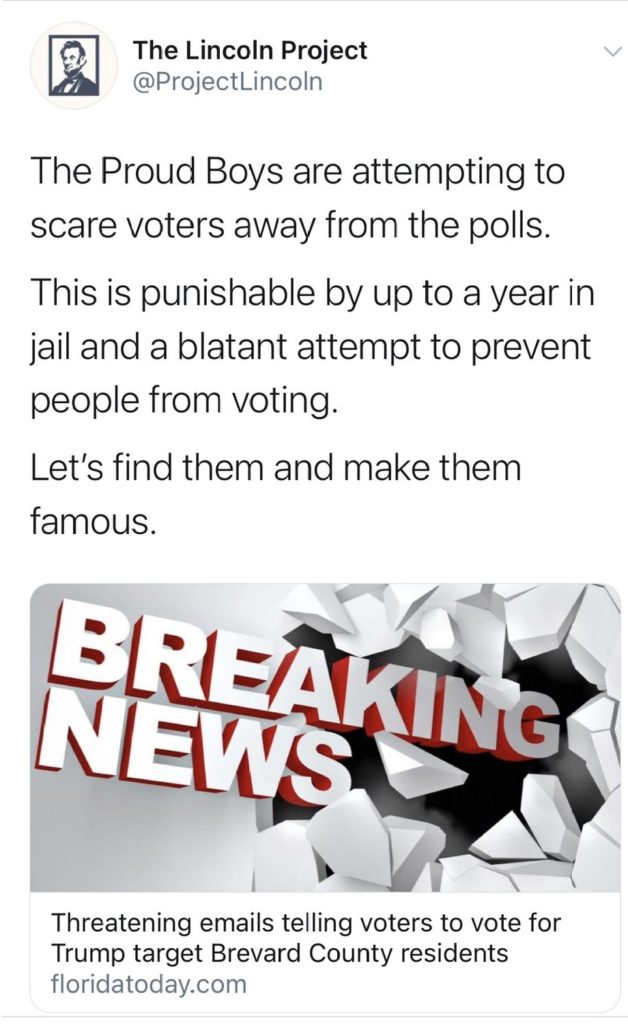 The reason the Iranians are out to damage Trump in favor of former Vice President Joe Biden because he is the guy who was part of the last administration, the one that sent them hundreds of millions of dollars in U.S. cash on pallets.

And so, because the Biden-loving Lincoln Project is a grifter organization staffed by legendary failures who are now enriching themselves from the Swamp Trough, they just went right ahead and spread this Iranian disinformation, which is what happens when you are mentally incapable of circumspection, skepticism, or anything resembling maturity when it comes to attacking Trump…. When you are incapable of doing anything other than jumping up and down and screaming the equivalent of The new phone book’s here! The new phone book’s here! if it’s something that might make Trump look bad and put Democrats in power.

You would think these idiots would have learned after spending four years being duped by the Russia Collusion Hoax. Actually…

When it comes to Steve Schmidt and George Conway and that other guy who looks like a Gollum in glasses, they don’t want to learn lessons. They just want to deceive and lie and grift themselves wealthy so they can party on the water with their Confederate “South Will Rise Again” coolers.

How bad are these guys? Well, they’re almost as dishonest as PBS’s Yamiche Alcindor, who even after learning this was all Iranian disinformation, she still tweeted this out, “Proud Boys domain used to send threatening emails to Democratic voters in Florida, Arizona and Pennsylvania.”

These are the people who lecture the rest of us about decency, y’all.

But that’s the beauty of selling your soul to the Establishment. Not only can you cash in to the tune of millions, you are never-ever-ever held accountable.

As long as your “mistake” advances the left-wing agenda approved by the national media, you can lie and mislead all you want.

Editor’s Note: At the time of publication, this story’s featured photo was of Bill Kristol; he was also listed alongside two leaders of the Lincoln Project. Kristol is not involved in the Lincoln Project but a different organization, Republican Voters Against Trump. The image has been updated and his name removed from the article.