Erica Joy Baker, the Democratic Congressional Campaign Committee’s (DCCC) latest hire, has a well-documented history of anti-law enforcement posts, including one in which she told activists in a recently deleted post, “If the cops kill me, burn every cop precinct to the ground.”

The DCCC announced Baker’s addition to the committee as the Chief Technology Officer in a press release on Monday. Rep. Sean Patrick Maloney (D-NY), chair of the DCCC, described Baker and the other additions as “seasoned operatives who know what it takes to win.”

In a statement, Baker listed her goal as helping Democrat House members “maintain a strong Democratic majority in 2022.”

The DCCC has a history of enlisting controversial figures who have espoused anti-law enforcement sentiments in the past, as Breitbart News detailed. Baker is no exception, as her social media history is filled with posts containing anti-police statements and sentiments, some of which have been deleted.

In a now-deleted tweet dated September 24, 2020, Baker instructed rioters to burn down police precincts in the event of her untimely death at the hands of police officers, whom she years prior referred to as “modern day slave patrol.” 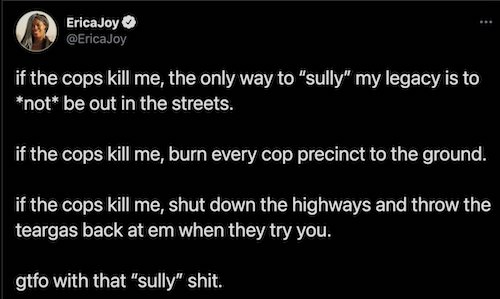 Baker appeared to delete another tweet, dated October 30, 2020, in which she asserted there are “no good cops.”

“this part. there is no line. they will lie about any and everything bc there’s nobody to stop them. there are no good cops. the good cops, the ones who speak up, get pushed out. the bad ones, the ones who are silent about or complicit in bad behavior, get to keep their jobs,” she wrote.

Some of her other anti-police tweets, however, remain live, including a post from January 11, 2021, in which she claimed white nationalists have infiltrated the U.S. Capitol Police:

i wonder if this will kick off an investigation into how deeply white nationalists have infiltrated capitol police, which will spur similar investigations into other PDs.

because i sure hope it does. https://t.co/wRmbn6F85k

Baker’s hire comes on the heels of the DCCC hiring an ex-gang member — Dyjuan Tatro, who is described as the “triggerman” for Albany’s Original Gangsta Killers — who has also expressed anti-law enforcement sentiments across social media. He once referred to police as “white supremacists” and defended looting as a “vital” form of social protest.

The DCCC’s controversial hires follow a contentious election cycle for Democrats in the House, who were reduced to a slim majority after Republicans made unexpected gains in the lower chamber. The Democrats’ lackluster performance caused a rift among caucus members, some who demanded their colleagues expunge “defund the police” and “socialism” from their vocabulary, contending the party’s position almost cost them the majority.

“We have to commit to not saying the words ‘defund the police’ ever again,” Rep. Abigail Spanberger (D-VA) reportedly told colleagues in a conference call following the November election.

“No one should say ‘defund the police’ ever again. Nobody should be talking about socialism,” the Virginia Democrat continued, warning they will get “fucking torn apart” if they continue down that road.

House Majority Whip Jim Clyburn (D-SC) appeared to hold a similar view, telling colleagues, if “we are going to run on Medicare for All, defund the police, socialized medicine, we’re not going to win.”