Alfredo Ortiz, President and CEO of Job Creators Network, one of America’s largest small business advocacy organizations, slammed Joe Biden who he says helped wage a war on Atlanta small businesses that are “suffering from the $100 million blow of losing the MLB All-Star Game due to misinformation about state voting rights” the president spread.

“While President Biden takes a 100th day in office victory lap by attending a drive-in car rally this evening, metro Atlanta small businesses are suffering from the $100 million blow of losing the MLB All-Star Game due to misinformation about state voting rights spread by the president himself,” Ortiz said in a statement.

“Biden must explain himself to metro area small businesses about why he lied about Georgia’s voting legislation that makes it easy to vote but hard to cheat, using inflammatory rhetoric such as calling it worse than Jim Crow,” Ortiz continued.

President Biden and first lady Jill Biden visited former President Jimmy Carter and former first lady Rosalyn Carter at their home in Georgia on Thursday. The trip was part of Biden’s trip to mark his 100th day in office.

Last month, Georgia Gov. Brian Kemp signed a voter integrity bill into law, a measure that in many ways expands voting in the Peach State. Joe Biden joined failed gubernatorial candidate Stacey Abrams and other Democrats in castigating the voting law as a throwback to Jim Crow. Major League Baseball moved its All-Star Game out of Atlanta and to Denver, Colorado, a majority-white city in a state where some voting rules make it harder for people to vote compared to Georgia.

The All-Star game was set to generate more than $100 million for metro Atlanta businesses.

“Biden and his Democrat allies like Stacey Abrams cost state small business owners countless dollars in lost tourism revenue. No patronizing PR stunt at a car rally will make up for that. If Biden truly wanted to do right by local small businesses, he’d demand that the MLB bring back the game to Atlanta,” Ortiz said.

“Last night, Biden announced massive new tax hikes on job creators as part of his ongoing war on small businesses. If enacted, these would further devastate small businesses in the state and across the country and destroy the economic recovery. As a consummate politician, Biden is pretending to be a friend of Georgia small businesses by attending events like this car rally, but his policy actions speak louder than tonight’s folksy teleprompter words.” 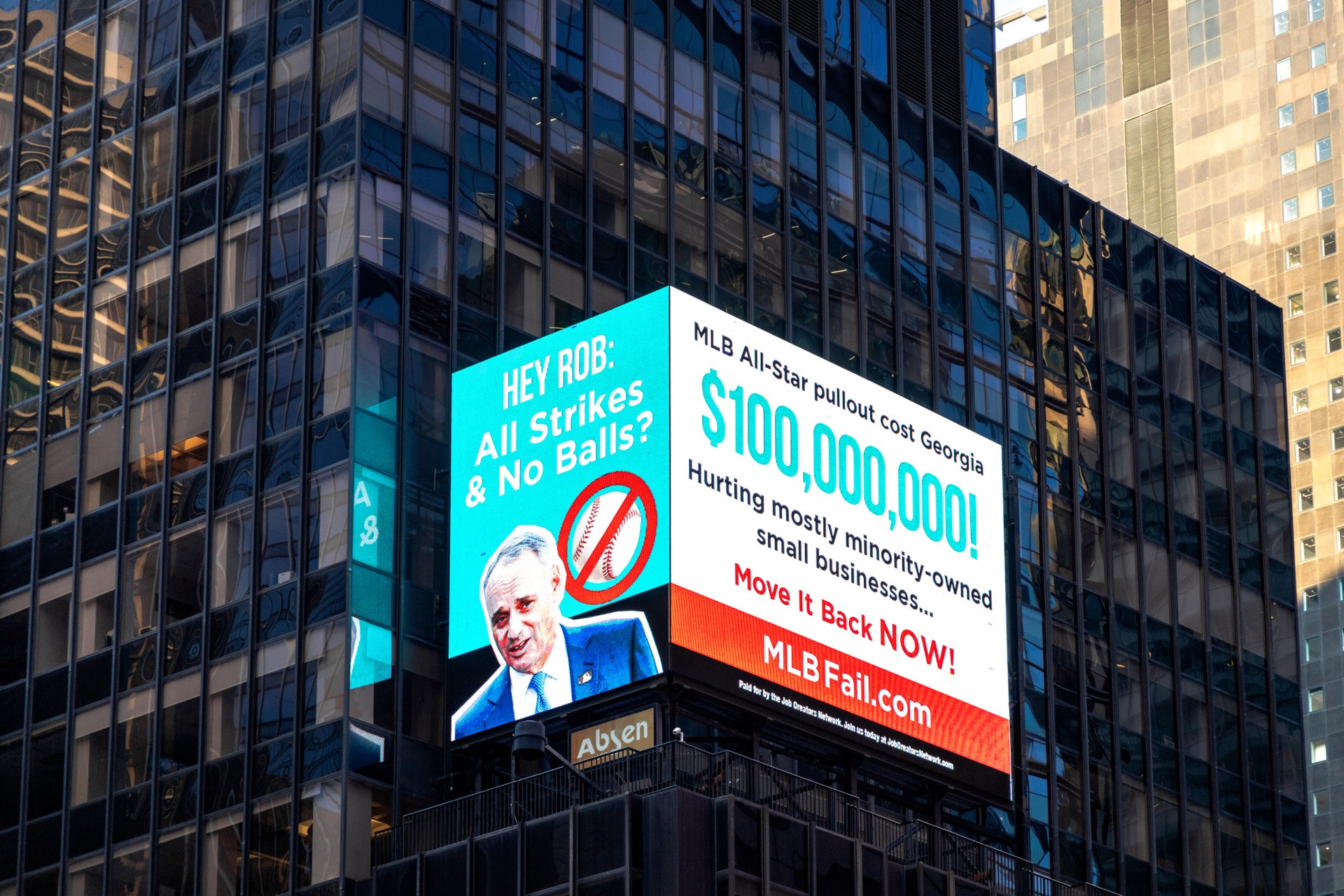 Earlier this month the Job Creators Network sent a letter to Major League Baseball commissioner Rob Manfred, slamming his decision to move the league’s All-Star game from Atlanta to Denver in protest of Georgia’s election law. Last week, JCN erected a billboard in New York City’s Times Square, across from Manfred’s office, which says “Hey Rob: All Strikes and No Balls?”