The communications director for Rep. Ron Kind (D-WI) mishandled the response from the congressional office to an investigation from Breitbart News into the vulnerable Democrat’s decades-worth of lavish travel on the dime of corporate and special interests.

Sarah Abel, the point person for press inquiries in Kind’s office, spent days not doing her job to answer questions about this matter and not scheduling the congressman for an interview to explain himself. Instead, she spent that time, as Breitbart News noted in the initial investigation, “firing off nasty tweets and retweets about Republicans.”

The investigation into Kind revealed that he—over the past two decades—took 14 separate trips funded entirely by special interests and corporations. The trips, on many of which he took his wife and some of which he took their kids as well, cost a total of more than $110,000—more than any other member of the Wisconsin delegation in Congress at this time. Excursion destinations included Rome, Geneva, Brussels, Munich, Fort Lauderdale, New Orleans, Amelia Island in Florida, Seattle, and Tel Aviv. On many of them, the documents Kind filed with the House Ethics Committee reveal, Kind and his wife Tawni stayed at five-star hotels and enjoyed lavish accommodations.

These revelations come on the heels of the reporting last week that Kind owns a commercial real estate property in La Crosse, Wisconsin, from which he collects tens-of-thousands of dollars in annual rent from a seedy massage parlor tenant. The tenant, Asian Sunny Massage, advertises on websites known to law enforcement to be hubs for illicit sex and prostitution advertisements. While no accusations of illegal activity at this spa have been specifically made, police have, in its three short years of operation, been called to the location no fewer than seven separate times—including several times in the middle of the night. Instead of seeking to get to the bottom of the matter of why police were called to his property in the middle of the night, Kind has leveled baseless accusations of racism against his GOP opponent, retired Navy SEAL Derrick Van Orden, for expressing concern about the reports.

After the publication of the story about Kind’s corporate and special interest-funded lavish travel, Abel seemed to take the revelation she was failing to do her job as a sort of badge of honor as she, late Wednesday night, updated her Twitter profile description to include a quote from that story. Her account noted she “Can be found ‘firing off nasty tweets and retweets.’” She also tweeted out an animated image of a woman putting on a crown with the text: “new twitter bio.” 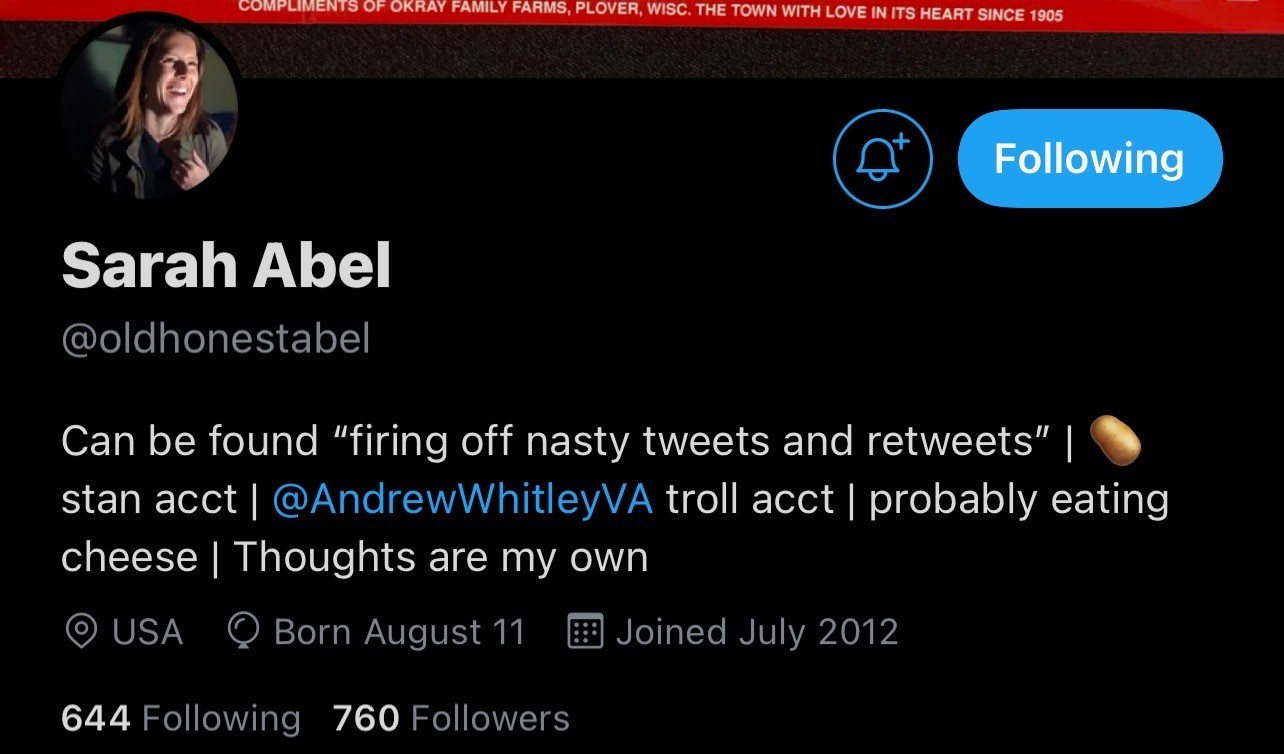 The tweet was clearly meant to highlight the fact she quoted the Breitbart News investigation in her updated Twitter biography for the account she uses purportedly to defend the congressman. That tweet is still live, but the bio has been reverted to remove the reference she added.

Her decision to embrace the investigation into her boss—and the description of her personally failing to do her job—only elevated the swirling scandals surrounding her politically vulnerable employer. GOP strategist Arthur Schwartz made this point in response to her decisions:

You really think it’s a good idea to call attention to the fact that your boss is a whorehouse landlord who took $100K+ in special interest funded travel? Your job is to protect your boss, not to promote yourself. Moron.

All of a sudden, come work-time Thursday morning, Abel had wiped her Twitter profile clean of the references to the Breitbart News investigation that she previously added.

Sources familiar with the matter told Breitbart News that she was warned by other staff in the congressman’s office that it was not a good look for her to be elevating herself—drawing attention to the very serious questions about her boss’s multiple angles of potential misconduct.

Abel has not replied to a detailed set of questions about the matter, and Kind’s chief of staff Hana Greenberg has also not answered when asked about it. At this stage, it is unclear if the congressman is aware of Abel’s conduct on this matter—and her mishandling of the inquiries regarding his behavior as a congressman. It is also as of now unclear which particular staffer or staffers had warned Abel to wipe her Twitter profile clean of the references to the Breitbart News story.

But again, perhaps the most important detail of all is the fact that Kind has still not agreed to an interview to explain himself on his lavish travel funded by special interests. The more he avoids the topic, and refuses to confront it, the more Republicans are going to zone in on it—and his lack of any response thus far, which is again in large part because of Abel not doing her job, has opened him up to serious criticism from Republicans. Sources familiar with the matter told Breitbart News that Republicans are already cutting the ads to attack Kind over the lavish vacations. Perhaps when they start airing in Wisconsin, the congressman can send his communications director a thank you note for them.