The demonstration occurred as Israel continued a military offensive to defend its borders that killed as many as ten senior Hamas military figures among others and launched air strikes that toppled two high-rise towers housing Hamas facilities. 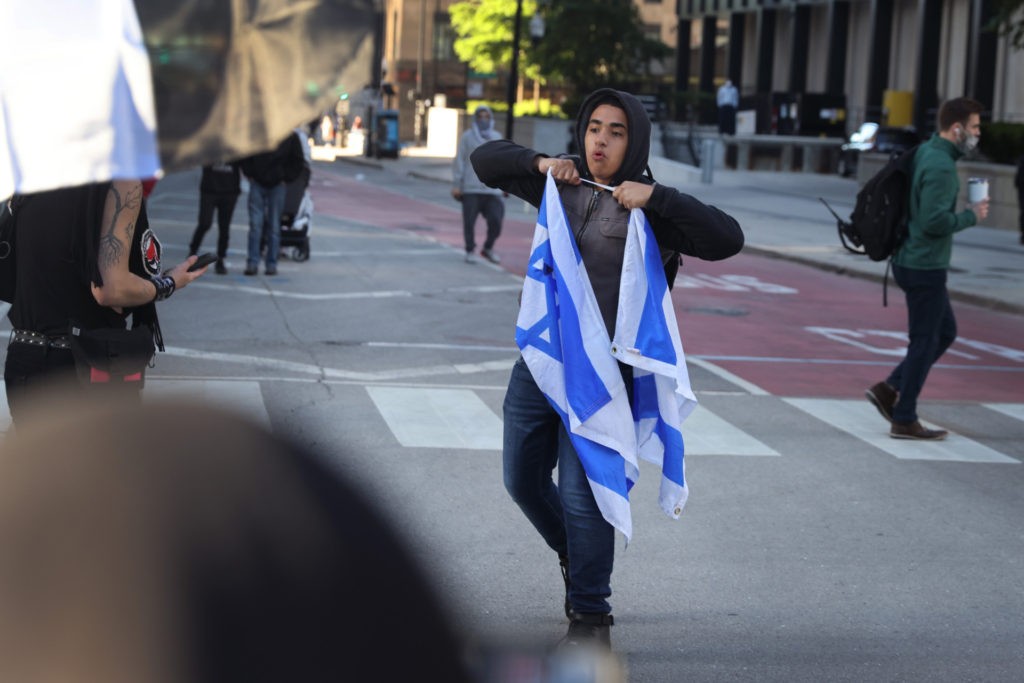 A demonstrator rips an Israeli flag as he marches with thousands of others toward the Israeli consulate to protest Israeli airstrikes in the Gaza Strip on May 12, 2021 in Chicago, Illinois.( Scott Olson/Getty Images)

As Breitbart Jerusalem reported, both Jerusalem and Tel Aviv have been subjected to the attacks directed by Hamas in the Gaza Strip.

Israeli President Benjamin Netanyahu made clear Israel’s actions in self defense remain no different from any other nation under direct attack.

As reported by Breitbart Jerusalem, “More than 1,000 rockets were launched from the Hamas-ruled enclave into Israel, killing five people and injuring hundreds more. Israeli airstrikes killed at least 35 people in Gaza, most of whom were terror groups or else victims of Hamas rocket fire that had fallen short of its target.”

The attacks have brought life to a standstill in those Israeli communities.

Video has emerged appearing to show a rocket fired by Palestinian terrorists, hitting a civilian bus in the Israeli city of Holon during a barrage on Monday night. https://t.co/QASn2KbqkM

Those who marched through Chicago did so even as U.S. President Joe Biden contacted Netanyahu in an effort to show U.S. support for the Jewish state.

Chicago Cardinal Blase Cupich issued a statement calling for “prayer and peace” between the two sides.

“There can be no doubt of Israel’s right to a secure existence. Palestinians, too, have a right to statehood, territorial integrity, and safety,” Cupich said. 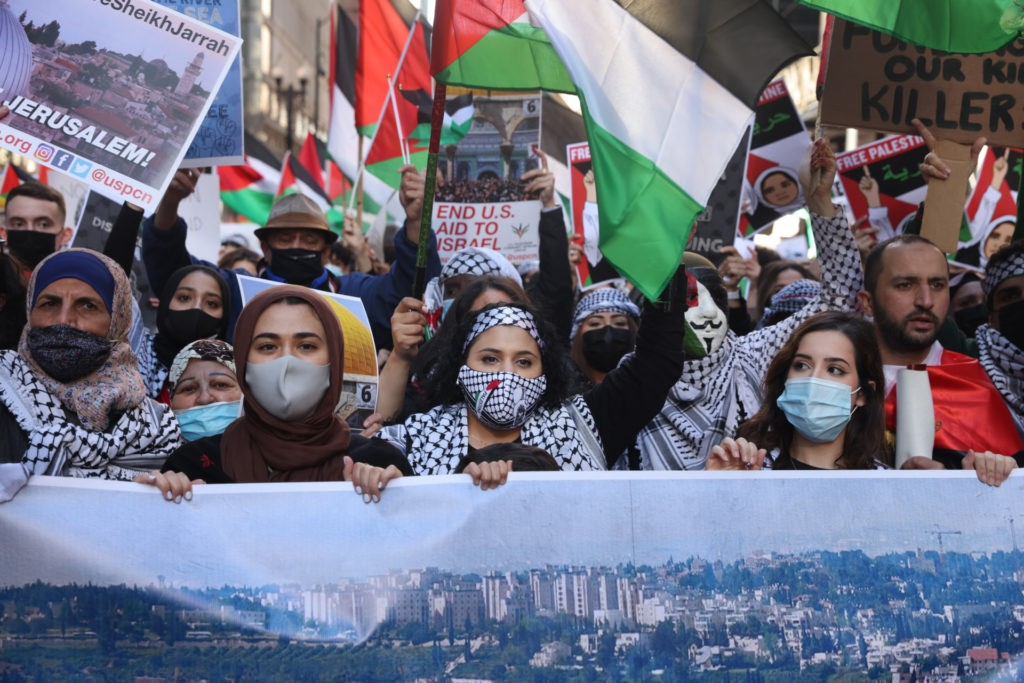 Thousands of people march through downtown to the Israeli consulate to protest Israeli airstrikes in the Gaza Strip on May 12, 2021 in Chicago, Illinois. (Scott Olson/Getty Images) 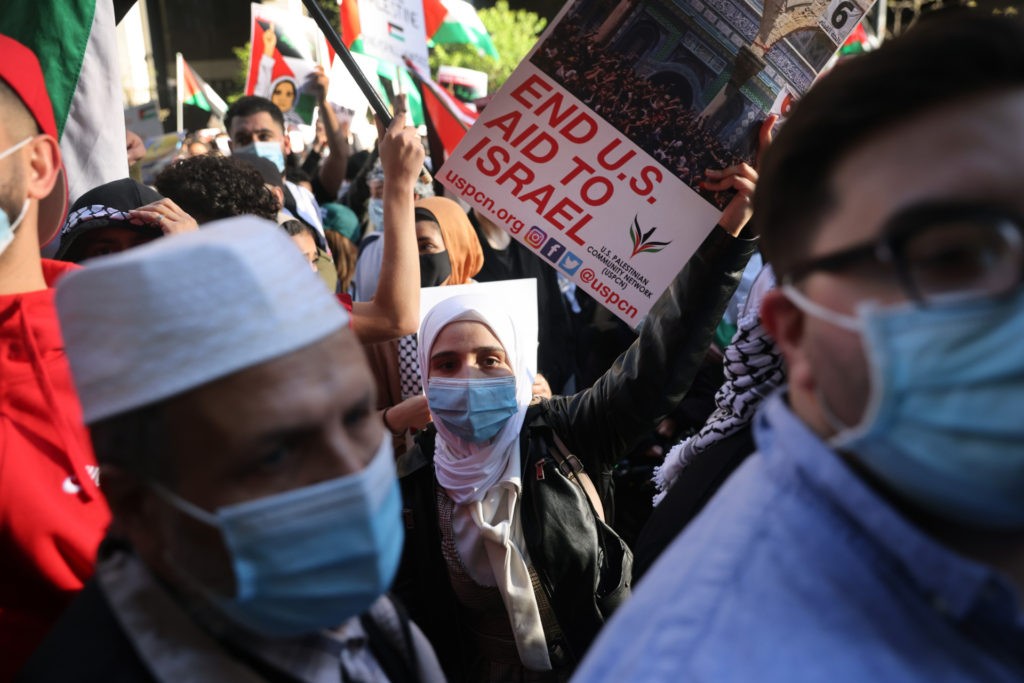 Thousands of protesters head towards the Israeli consulate to protest Israeli airstrikes in the Gaza Strip on May 12, 2021 in Chicago, Illinois. The death toll in Gaza continues to rise as the region is seeing the worst outbreak of violence since the 2014 Gaza war. (Scott Olson/Getty Images) 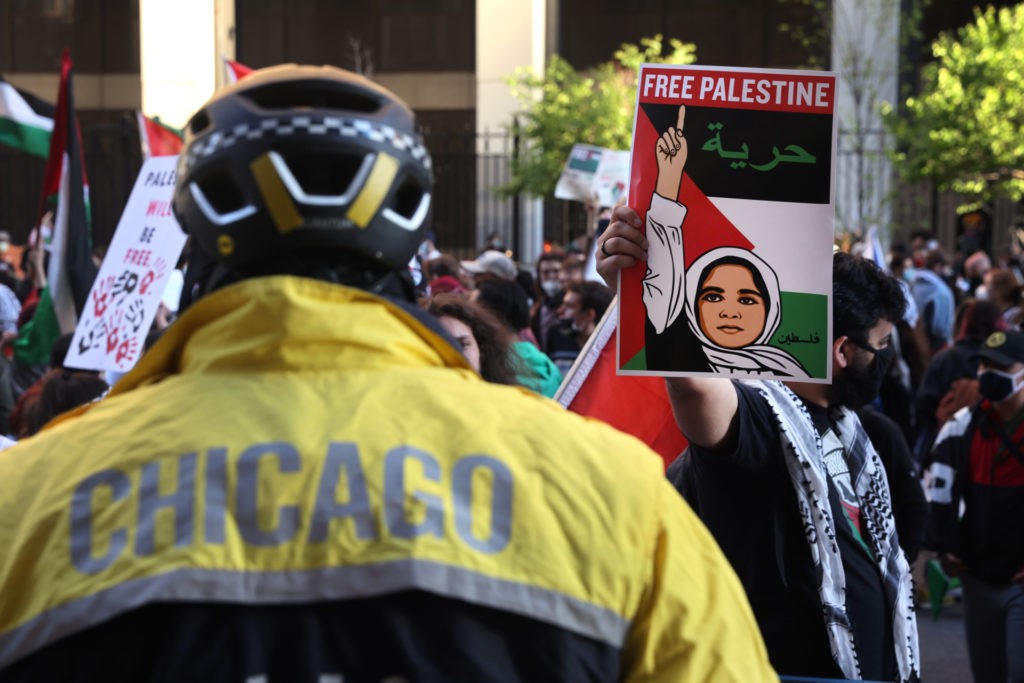 The demonstrators began with a rally at Grant Park before marching through downtown to the consulate. (Scott Olson/Getty Images) 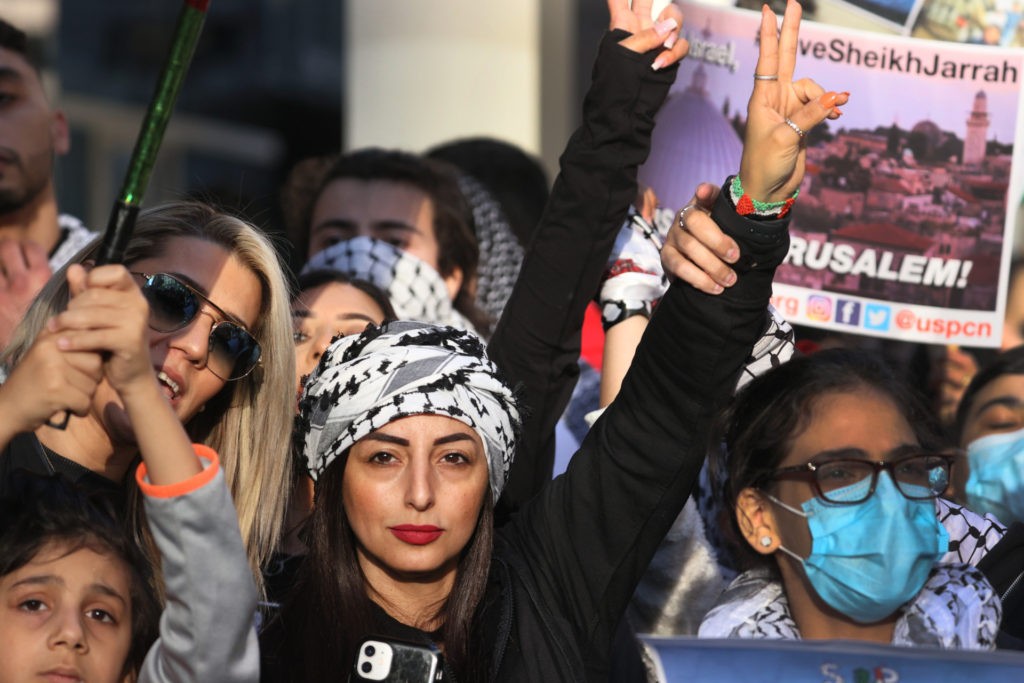 Thousands of people demonstrate outside of a building that houses the Israeli consulate to protest Israeli airstrikes in the Gaza Strip on May 12, 2021 in Chicago, Illinois. (Scott Olson/Getty Images)

Many participating in the demonstration were from Bridgeview which has one of metropolitan Chicago’s largest Palestinian populations, AP reports.

“It’s difficult to watch the news and see what’s happening to our families and friends there,” Hatem Abudayyeh, chairperson of the U.S. Palestinian Community Network, told NBC-Chicago.