The man responsible for steering U.S. government funding to the Wuhan Institution of Virology thanked Dr. Anthony Fauci for publicly dismissing the theory coronavirus may have leaked from the lab.

Peter Daszak (pictured), the president of the EcoHealth Alliance, sent Fauci an email on April 18th, thanking him for steering the public toward the natural bat-to-human theory for coronavirus origin.

“I just wanted to say a personal thank you on behalf of our staff and collaborators, for publicly standing up and stating that the scientific evidence supports a natural origin for COVID-19 from a bat-to-human spillover, not a lab release from the Wuhan Institute of Virology,” Daszak wrote to Fauci on April 18, 2020.

Less than 12 months later Daszak would be in Wuhan personally leading a World Health Organization (W.H.O.) team charged with investigating the theory of an accidental laboratory leak being behind COVID-19’s origination, as Breitbart News reported.

He told CBS’s Lesley Stahl soon after there was “no evidence” to back the theory that a leak led to the virus.

“For an accidental leak that then led to COVID to happen, the virus that causes COVID would need to be in the lab. They never had any evidence of a virus-like COVID in the lab,” Daszak advised. 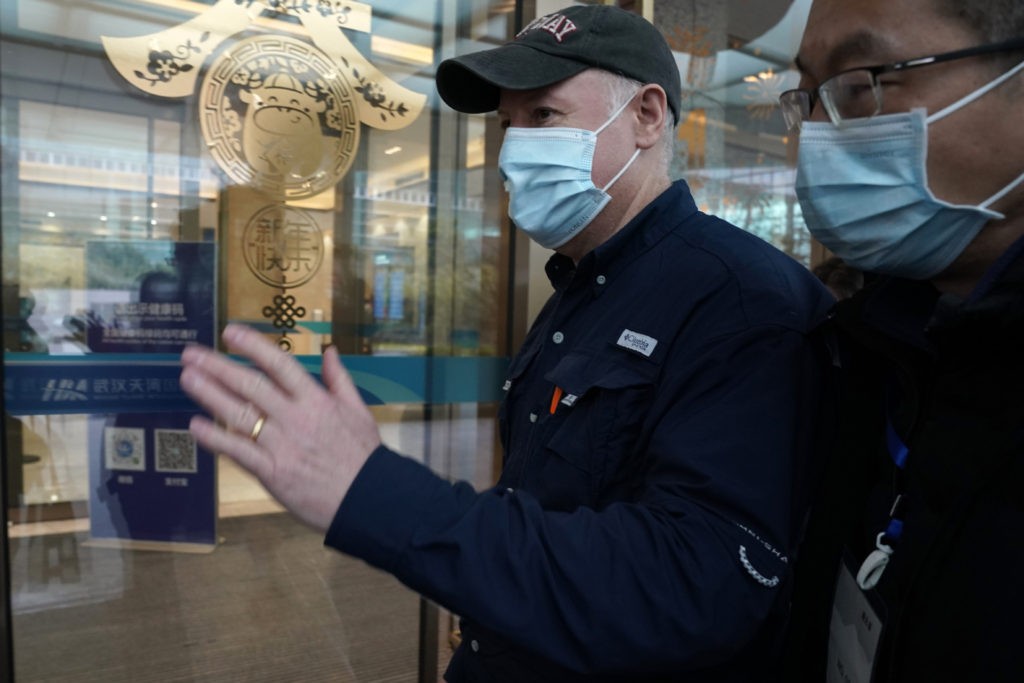 Peter Daszak of the World Health Organization team waves goodbye to journalists as he arrives at the VIP terminal of the airport to leave at the end of the WHO mission in Wuhan in central China’s Hubei province on Wednesday, Feb. 10, 2021. (AP Photo/Ng Han Guan)

The email from Daszak to Fauci was obtained by Buzzfeed through a FOIA request and released publicly on Wednesday.

The EcoHealth Alliance funneled $3.4 million in grants to the Wuhan lab in China between 2014-2019.

“From my perspective, your comments are brave, and coming from your trusted voice, will help dispel the myths being spun around the virus’s origins,” Daszak wrote.

The government redacted an entire paragraph of Daskaz’s email to Fauci.

Unusual exemption in the Peter Daszak thank you email to Fauci.

FOIA exemption (b)(7)(A) applies to "records or information compiled for law enforcement purposes, but only to the extent that production… could reasonably be expected to interfere with enforcement proceedings." pic.twitter.com/cpunxCXfQv

Fauci dismissed the lab leak theory again at a press briefing on April 17.

“A group of highly qualified evolutionary virologists looked at the sequences in bats as they evolve. The mutations that it took to get to the point where it is now are totally consistent with a jump of a species from an animal to a human,” he said in response to a reporter’s question.

At the time, then-President Donald Trump said the government was investigating the lab-leak theory, admitting it was plausible.

“We’re looking at it,” Trump told reporters during an April coronavirus briefing at the White House. “A lot of people are looking at it – it seems to make sense.”