Ohio Senate candidate Jane Timken had a photograph on her website’s “endorsements” page of her with former President Donald Trump, something an aide for the former president told Breitbart News displeases his team.

The photograph, which first received public attention from Timken’s website on Friday, made it appear as though she was claiming Trump’s endorsement — which she does not have. After a number of the other GOP campaigns for U.S. Senate in Ohio flagged it to Trump and his inner circle on Friday morning, Timken removed the photograph from her website.

“People close to the president are not happy,” a Trump aide told Breitbart News.

It is unclear if the former president will issue a public statement about this at all. But Timken’s decision to remove the photograph as Trump and his team are upset about the matter may help her avoid Trump’s public wrath.

Timken’s campaign confirmed to Breitbart News that the website has been changed, and claimed that she was never trying to give off the impression Trump had endorsed her.

“There are lots of pictures on Jane’s website of her and President Trump, because she’s been with him often over the last five years doing more than anyone else in Ohio to secure his reelection and fight for his America First agenda,” Timken spokeswoman Mandi Merritt told Breitbart News. “No amount of whining from her opponents will change the fact that while they sat at home or quit the tough fights, Jane was out on the trail putting 150,000 miles on her car standing in the trenches for President Trump. The page was very clear in listing out Jane’s public endorsements from more than 125+ grassroots conservative leaders, swamping the weak support for other fake MAGA candidates and past quitters in the race.”

Trump is heading to Ohio next weekend to campaign with Max Miller, his former aide who’s challenging Rep. Anthony Gonzalez (R-OH) in a primary. Gonzalez is one of the ten House Republicans who voted to impeach Trump in his second impeachment right before he left office earlier this year. Nine of the ten Republicans who did so have drawn primary challengers, and Trump has been clear in that he wants them all to lose their reelection battles.

The Ohio GOP Senate primary in the race to replace retiring Sen. Rob Portman (R-OH) is a crowded one. In addition to Timken, the former chairwoman of the Ohio GOP, other declared and likely candidates include former state Treasurer Josh Mandel, businessman Bernie Moreno, Hillbilly Elegy author J.D. Vance, businessman Mike Gibbons, and more. Virtually all of them are vying for Trump’s endorsement in the state he won twice in the general election and in which he remains popular.

Moreno tweeted out a screenshot of the mobile version of Timken website earlier on Friday, correctly predicting it would be taken down soon:

I can’t imagine this fake news claim about Donald J Trump will remain up much longer. pic.twitter.com/dwFECOcaMY

A senior adviser to one of the other GOP candidates told Breitbart News that Timken is not the right candidate for Trump supporters.

“Jane Timken turned her back on President Trump the moment she decided to praise Anthony Gonzales for standing with radical Democrats to impeach him in January,” the senior adviser, who requested anonymity to speak freely, told Breitbart News. “Then when she was rightly criticized for that, she immediately flip flopped and pretended like she never said what she said. So it should come as no surprise that she’s now dishonestly claiming he’s supporting her flailing campaign. Ohio conservatives can not let Jane Timken anywhere near the US Senate or else she will betray them the same way she betrayed President Trump.”

A senior adviser to another of the GOP campaigns also piled on—citing Timken’s close relationship with Gonzalez, the anti-Trump Republican congressman whose primary challenger Trump is visiting next weekend to hold a rally with. “Jane will first need to explain to Ohio voters why she supports one of the few congressmen who voted to impeach President Trump,” the second adviser to another of the GOP campaigns told Breitbart News. “Jane Timken and Anthony Gonzalez coordinate closely and share campaign team members. Jane is trying to suggest that President Trump doesn’t care that Congressman Gonzalez voted to impeach him. Believe me, he does care.”

Timken’s team, in response to inquiries about this endorsement page on her website from Breitbart News, also provided a mailer that Mandel’s campaign sent out to supporters which says on it: “President Trump is counting on us!” 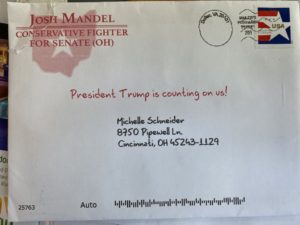 Mandel’s campaign did not respond to a request for comment on this.

Trump’s endorsement is extremely powerful in GOP primaries around the country. For instance, after Trump endorsed Rep. Ted Budd (R-NC) over former Gov. Pat McRory and former Rep. Mark Walker (R-NC) in North Carolina’s GOP Senate primary in the race to succeed retiring Sen. Richard Burr (R-NC), Budd shot up in the polls significantly. According to a Budd campaign poll released this week, when voters are made aware of Trump’s endorsement of his candidacy he increases his support by 27 percent — something basically unheard of in American politics.

Trump is expected to get much more active in the coming weeks and months on the campaign trail, and has been holding court in Bedminster, New Jersey, with aides, candidates, potential candidates, and movement leaders in recent days as he plots his broader return to the national stage. Since he left office in January, Trump has made just a handful of public appearances—speeches at the Conservative Political Action Conference (CPAC) in Orlando, Florida, as well as at the North Carolina GOP convention where he endorsed Budd. Trump has also conducted some television and radio interviews from either Bedminster or from Mar-a-Lago, his luxury resort in southeast Florida.

Trump’s upcoming Ohio rally is his first such rally he is hosting since leaving the White House. The last time he held rallies were a pair of events in Georgia in the lead-up to the Senate runoffs in January, where both Sens. David Perdue (R-GA) and Kelly Loeffler (R-GA) lost to now Sens. Jon Ossoff (D-GA) and Raphael Warnock (D-GA). Those two rallies came amid enormous post-election strife, especially in Georgia, where conservatives were furious with state GOP officials over their handling of the election.