Florida Gov. Ron DeSantis (R) defended his administration’s commitment to standing up for children, reiterating his belief that parents — not the government — can and should make decisions about their child’s health and safety, particularly in regard to wearing masks in school.

Last week, the Florida governor affirmed his administration will not mandate schools to require children to wear masks when they return to the classroom this fall.

“We want kids to be able to be kids. We need them to be able to breathe. It’s terribly uncomfortable for them to do it. There’s not very much science behind it,” he said during a Thursday news conference at Indian River State College in Fort Pierce, Florida. 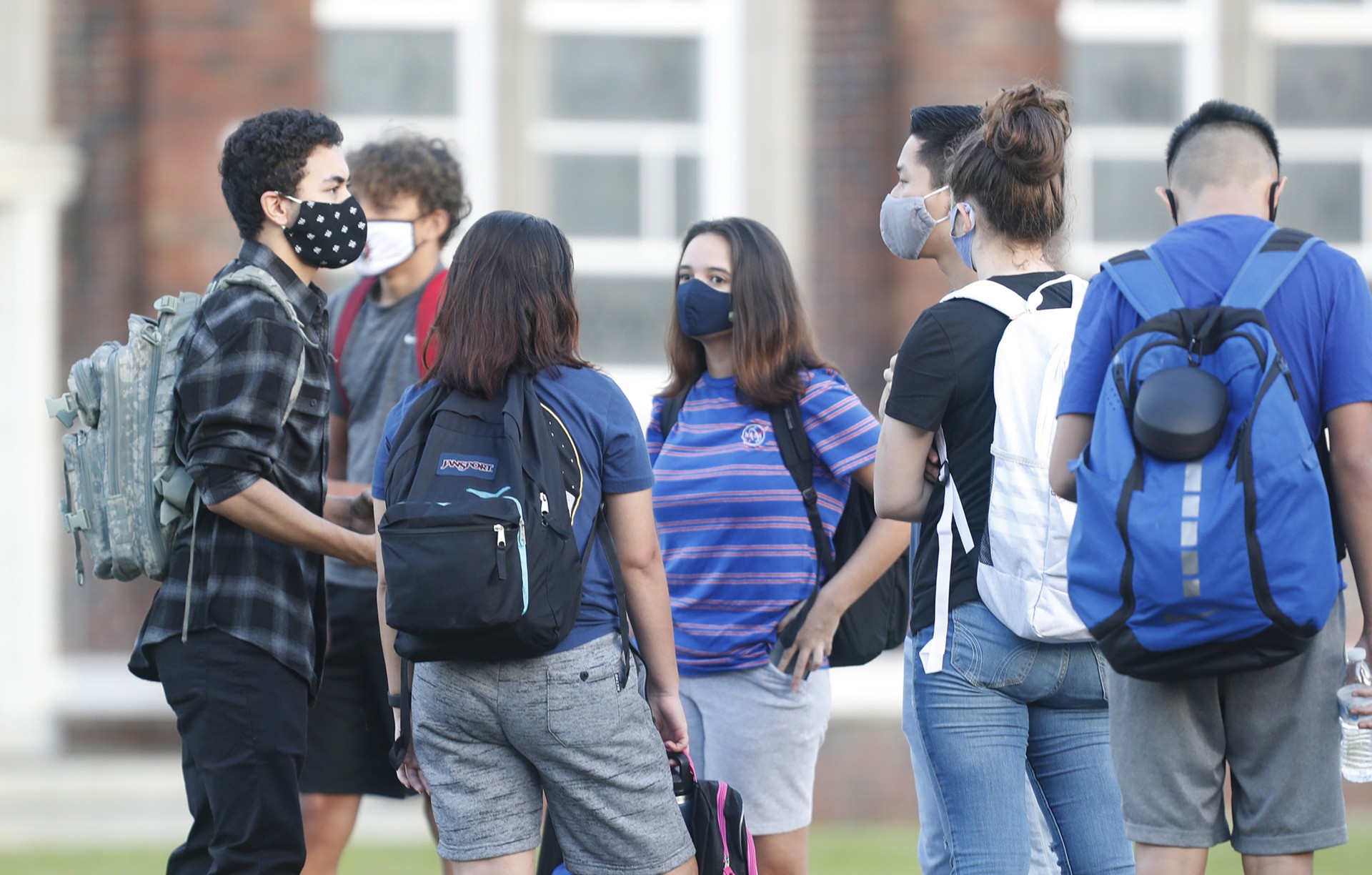 Students at Hillsborough High School wait in line to have temperature checked before entering the building on August 31, 2020 in Tampa, Florida (Octavio Jones/Getty Images)

On Monday, DeSantis held a roundtable discussion with medical professionals, as well as a parents and students, all of whom discussed the subject of mask mandates in school.

During the discussion, DeSantis reiterated his belief that parents — not the government — should make decisions about their child’s health.

“And basically going forward, we believe that parents can make decisions about their, their child’s health and safety which is why we think that parents can make the decision about whether the kids should be wearing masks in school,” DeSantis said, predicting that the “vast majority” of parents in Florida will likely opt against it because “they recognize the track record of the last year.”

“And there’s not evidence in places where you can say, well, gee, because they didn’t have masks, they had these horrible outcomes that just didn’t happen. We basically had normal school years in many parts of the state, they were successful,” DeSantis explained, noting coronavirus cases were virtually no different in schools that implemented drastic mitigation strategies compared to those that did not. He also emphasized the importance of basic human interactions such as smiling and the impact it has on children:

I mean, that’s normal human behavior and that’s things that we need to make sure that we’re exposing our kids to. And so I hope that I want to, one just commend all the Florida school districts, who up to this point have all adopted policies of masks being optional and basically being the decision of the parent and the student. And I think we look forward to starting the school year without that being the case. I think that that’s the most just way to do it at the same time. I mean, you know, we just look when we see some of this stuff rattling around, when they say that all these elementary school kids are going to have to wear masks all day coming out of Washington, coming out of these organizations, I just thought it was important to make sure that we get some folks together who can speak intelligently about this, both from a medical perspective, a psychological perspective, but also just the perspective of people on the ground who are running schools, who have kids in school or who themselves are in school.

And I think it really makes, makes a difference. So, so our hope is, is that we go into next school year full throttle, just like just like last year, but a normal school year. And if you look back, I mean about this time everyone was gearing up and I remember like Good Morning America would show up at like some of our school districts to try to act like, oh my gosh, impending doom. And that was kind of the narrative when we’d have athletics, all this stuff, there was, they tried to stop college sports last year at this time. I mean, I remember the big ten that they canceled the season. We made sure that the SEC, ACC and the other conferences here in Florida, our schools were playing and we weren’t gonna deprive the students, student athletes have that opportunities, but there’s just been so much nonsense that’s been put out. Hopefully we can kind of be grounded on this, go forward, I think in an intelligent way, and just make sure that Anita and her fellow parents get to make the decisions that, that you think is best for your … boys. And that’s all that I would ask for as a parent as well. I mean, I think that that’s something that’s reasonable. 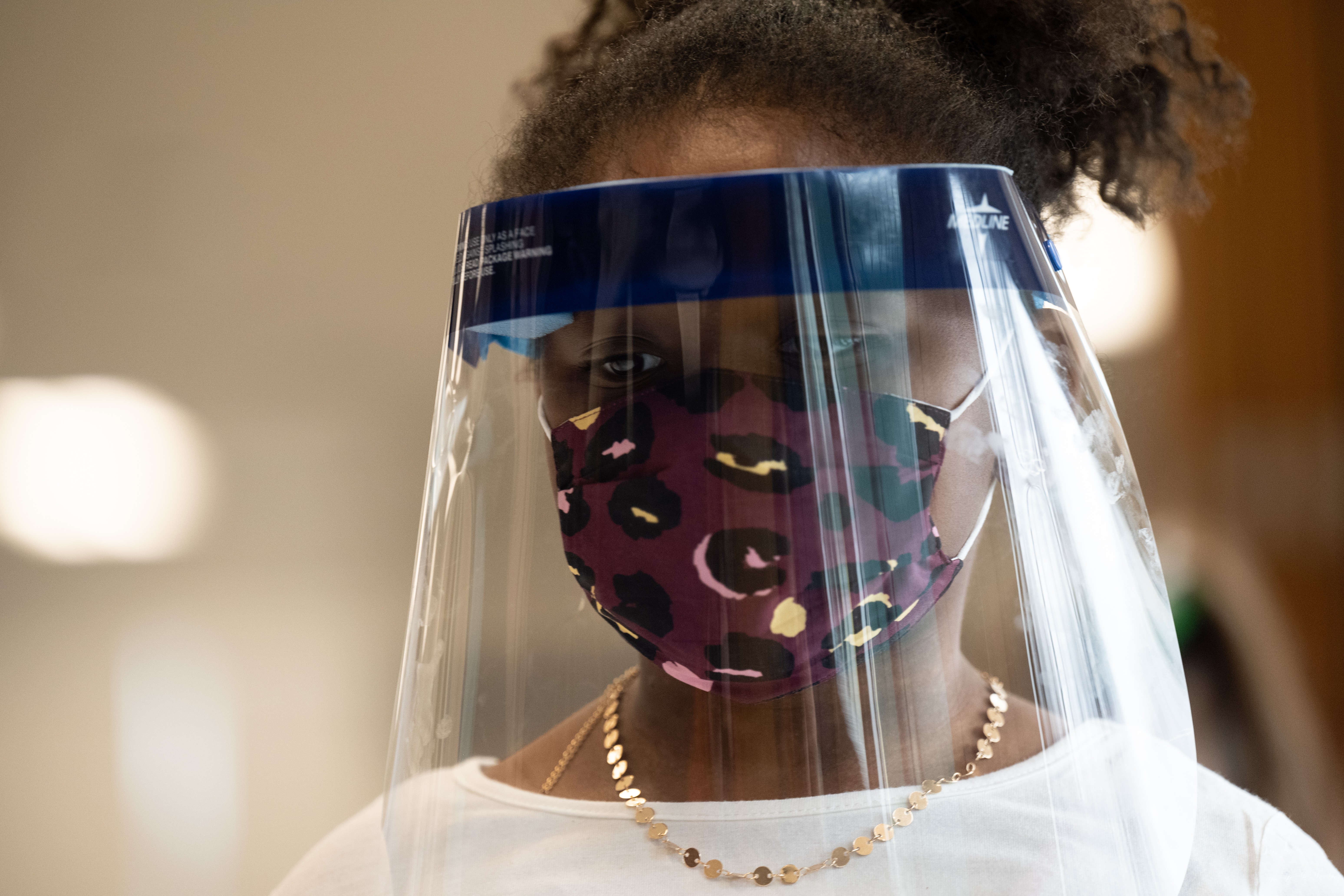 During the discussion, Anita Davis, a parent liaison for the Governor’s Charter Academy, thanks DeSantis for prioritizing freedom, allowing parents to make these decisions.

“If we mandate it, then what are we really saying to our parents?” she said, detailing the problems mask mandates cause, in part, by tasking teachers with policing.

“Oh, absolutely. Because especially with our middle son who is on the spectrum, right? So for him, with all of the media coming in and saying that, and he’s very close to his baby brother who went back in person to school, right?” she said.

“His process was that my brother’s going to die if he leaves. And then we had to take therapeutic, you know, counseling for him to help him understand no son that’s, you know, it’s going to be fine. And we just use accountability. We take the proper precautions, right?” she continued, adding, “Like we would with any other thing, with the flu.”

“The mask probably only helped mom with the smell of football. Really. Other than that, nothing,” she added.

As of Tuesday morning, Centers for Disease Control and Prevention (CDC) guidance recommended the unvaccinated to wear masks in schools, meaning all children under the age of 12 at least, given that they are not eligible to receive any of the vaccines, none of whom have been formally approved by the Food and Drug Administration (FDA). However, the federal health agency is expected to update its guidance, recommending everyone in K-12 schools to wear a mask, regardless of vaccination status.