U.S. shot putter Raven Saunders garnered attention this week during her appearance at the Tokyo Olympics when she twerked after her last throw to take second place and a silver medal.

According to Saunders, the decision to twerk, a move criticized as disrespectful by many viewers, was done to protest in support of oppressed people and the LGBT community.

On Monday, during an interview with NBC’s “TODAY” show, Saunders explained the protest, saying she decided to use her “platform to speak up for all those people” in the LGBT and black communities. 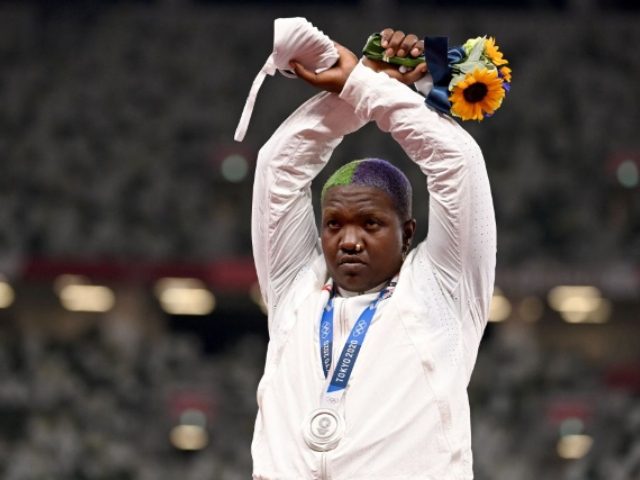 “I’m a black female, I’m queer, and I talk about mental health awareness — I deal with depression, anxiety, and PTSD, a lot — so for me personally, I represent being at that intersection,” Saunders said. “I decided to use my platform to speak up for all those people, for anyone who represents any part of or any one of those groups, especially, this medals is for [them].”

Following the event, Saunders also said she wanted to show younger generations that “you can be you and you can accept it,” further explaining her decision.

“To be me. To not apologize,” Saunders said. “To show younger people that no matter how many boxes they try to fit you in, you can be you, and you can accept it. People tried to tell me not to do tattoos and piercings and all that. But look at me now, and I’m poppin’.”

Gwen Berry, a U.S. Olympic hammer thrower who also joined in on protest efforts during Olympic trials when she turned away from the American flag during the playing of the national anthem, failed to medal during finals on Tuesday.