It would be against the law if Defense Secretary Lloyd Austin made coronavirus vaccines mandatory for American troops before they are approved by the Food and Drug Administration (FDA), Rep. Mark Green (R-TN) told Breitbart News in an exclusive interview on Friday afternoon, after he sent a letter to Austin warning him against the move.

“I wrote the letter because of a concern that the executive branch is somehow going to operate outside of the laws written by Congress. And they can’t just decide that they’re going to disregard the law,” said Green, an Army combat veteran and a physician.

“It’s time for Congress to stand up to the executive branch’s abuse and violation of the law. And so I wrote the letter basically to say this is an illegal act and the courts have supported the law,” he added.

As far as receiving a presidential waiver to mandate the vaccine before FDA approval, Green said the defense secretary can do so only in connection with service members’ participation in a “particular military operation.” He cited 10 U.S. Code § 1107, which states:

(3)The Secretary of Defense may request the President to waive the prior consent requirement with respect to the administration of an investigational new drug or a drug unapproved for its applied use to a member of the armed forces in connection with the member’s participation in a particular military operation.

“Right now what they’re talking about — a blanket mandate for all of DOD — is not in accordance with the law,” he said. “If you just excuse the executive branch breaking the law, then what’s next?” He added:

That was the whole point of the way our nation built the military and made it second to the civilian control and the laws of the land so that we wouldn’t have the president, through his military, act outside of the laws written by Congress. It just goes to the very foundation of who we are as a country. You can’t break the laws as the secretary of defense. That’s going down a path that we can’t go down as a country.

Both CNN and Fox News reported on Wednesday that Austin would send a recommendation to President Joe Biden to make the vaccines mandatory for members of the military, in addition to other mandatory vaccines. The administration could announce it as early as this week. Fox News reported it would come on Friday.

Green sent his letter to Austin on Friday morning in hopes of heading off the move. If the reports are accurate, it may have worked. He said as of Friday afternoon, no order from the president had been given to military commanders.

Green wrote to Austin in his letter:

The law of the United States is clear. Mandatory vaccination is illegal for military personnel prior to complete approval (Doe v. Rumsfeld, 341 F. Supp. 2d 1 (D.D.C. 2004). This has not occurred and could be another several months away.

As long as the vaccine is authorized under an Emergency Use Authorization, the Department of Defense does not have the authority to implement such an order. Servicemembers who do not wish to receive the vaccine cannot be required until the approval process is completed. Any action to require it is illegal. The Secretary of Defense is not above the law. The courts concurred.

I led 15 Members of Congress in making it clear to @SecDef: The military vaccine mandate he is considering is illegal. No servicemember can be required to take a vaccine that is only authorized under emergency use. https://t.co/XyhgFfGBQi

Green said from a physician’s perspective, the coronavirus vaccine is just like any other vaccine with risks and benefits, and he recommends it for older adults for whom the risk of getting coronavirus is greater than the risk from the vaccines. “So, I say people should get the vaccine, but, it’s a risk-benefit analysis that should be made between the patient and the doctor,” he said. 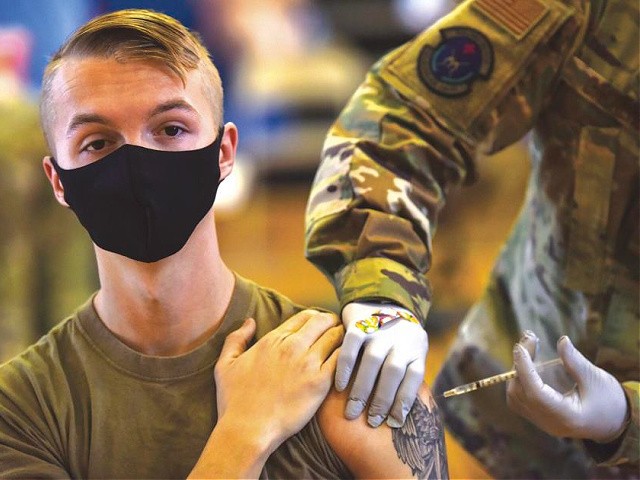 In this Feb. 9, 2021 photo provided by the Department of Defense, Hickam 15th Medical Group host the first COVID-19 mass vaccination on Joint Base Pearl Harbor-Hickam. By the thousands, U.S. service members are refusing or putting off the COVID-19 vaccine, as frustrated commanders scramble to knock down internet rumors and find the right pitch that will convince troops to take the shot. Some Army units are seeing as few as a third agree to the vaccine, others are higher. (U.S. Air Force Tech. Sgt. Anthony Nelson Jr./Department of Defense via AP)

He said he and other lawmakers have been getting calls at their offices for weeks about leaders’ harassment of troops to get vaccinated, so when reports said the defense secretary was planning to recommend to Biden to make vaccines mandatory, people “all over the military were calling us and emailing us and calling our office.”

He said any harassment to get vaccinated before the vaccines are FDA approved or mandatory is illegal.

“No harassment can be happening right now, none at all. And if it is, it’s illegal,” he said.