The Supreme Court of the United States (SCOTUS) will hear a challenge to New York gun control that will highlight the extent of constitutional protections for carrying a gun outside the home.

The case centers on New York’s requirement that concealed carry applicants show “proper cause” before being issued a carry permit.

The case was brought by the New York State Rifle and Pistol Association and private citizens Brandon Nash and Robert Koch. Nash and Koch were denied a concealed permit based on the “proper cause” requirement.

New York prohibits its ordinary law-abiding citizens from carrying a handgun outside the home without a license, and it denies licenses to every citizen who fails to convince the state that he or she has “proper cause” to carry a firearm. In District of Columbia v. Heller, this Court held that the Second Amendment protects “the individual right to possess and carry weapons in case of confrontation.”

And the petitioners seek a ruling as to “whether the Second Amendment allows the government to prohibit ordinary law-abiding citizens from carrying handguns outside the home for self-defense.” 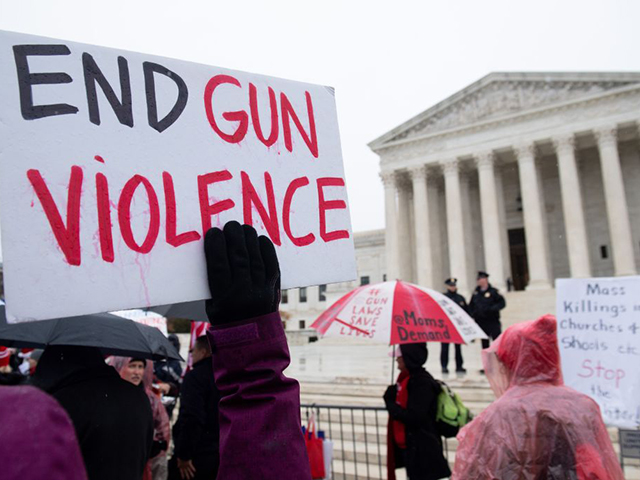 Supporters of gun control and firearm safety measures hold a protest rally outside the US Supreme Court as the Court hears oral arguments in State Rifle and Pistol v. City of New York, NY, in Washington, DC, December 2, 2019. (Photo by SAUL LOEB/AFP via Getty Images)

A federal judge ruled against Nash and Koch in 2018, and his ruling was upheld by a federal appeals court.

[“Proper Cause’ laws] deny to ordinary law-abiding citizens like petitioners Nash and Koch the rights that the Second Amendment protects. By requiring a permit applicant to submit evidence differentiating him or herself from the body of “the people” guaranteed rights under the Second Amendment, the New York regime is not merely an infringement; the regime is antithetical to the constitutional freedom itself.