There are an overwhelming amount of Americans who disapprove of President Joe Biden’s handling of the situation in Afghanistan, according to an NBC News poll.

Biden recently botched the withdrawal of troops, leaving the country open for Taliban terrorists to conquer parts of the country, ultimately leaving thousands of Americans and U.S. Afghan allies stranded. 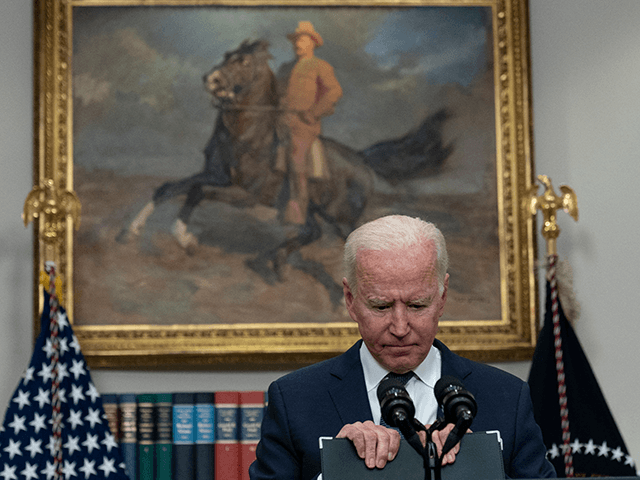 U.S. President Joe Biden speaks during an update on the situation in Afghanistan and the effects of Tropical Storm Henri in the Roosevelt Room of the White House in Washington, DC ,on August 22, 2021. (Photo by ANDREW CABALLERO-REYNOLDS/AFP via Getty Images)

Overall, Biden’s approval rating is less than 50 percent in the poll as well. Only 49 percent of the respondents said they approve of his job performance. Compared to the 48 percent who disapprove of it.

In April, NBC News put out a similar poll that showed Biden’s overall job approval rating at 53 percent and his disapproval at 39 percent.

The NBC News poll was conducted between August 14 and 17, before, during, and after the fall of the now Taliban-controlled Kabul, Afghanistan. The survey asked 1,000 people, with a margin of error of 3.1 percent. NBC News’s more recent poll is the first time the Afghanistan question has been asked.

Another recent poll showed Biden’s rolling job approval average in 37 states is underwater. Only 12 states show a positive approval of Biden, and one state, Colorado, polled at an even tie with 46 percent.

Reports show thousands of Americans are trapped in Afghanistan while most struggle to get to the airport in Kabul for evacuation. Some reports also claim the Taliban has been seizing U.S. passports from Afghan Americans trying to enter the Hamid Karzai International Airport to flee the country.