The video outlines Demings’ support for the “socialist squad,” including Reps. Alexandria Ocasio-Cortez (D-NY), Rashida Tlaib (D-MI), and Ayanna Pressley (D-MA), and her willingness to vote with the squad 94 percent of the time.

Additionally, the socialists are trying to force their so-called infrastructure bill on the American people, which can cost up to five trillion dollars. The video additionally stated, “Floridians deserve to know, will Demings once again fall in line with the “socialist squad?”

In a press release, the Rubio campaign also questioned if Demings would stick with the “socialist squad” and in turn vote for the “$5 Trillion socialist spending spree” when the House votes on the bill sometime this week.

Since she voted with them almost 100 percent of the time, the press release stated that she “is once again expected to support her friends in Washington over the interests of Floridians.” 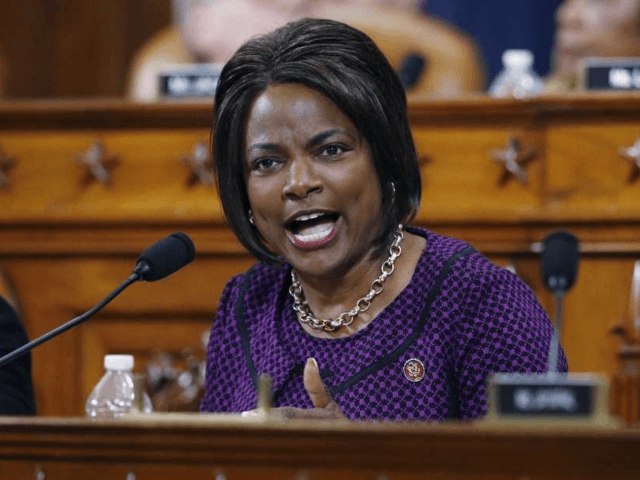 In this Dec. 11, 2019, file photo, Rep. Val Demings, D-Fla., gives her opening statement during a House Judiciary Committee markup of the articles of impeachment against President Donald Trump on Capitol Hill in Washington. Demings is among the women Joe Biden is considering for his vice presidential running mate. (AP Photo/Patrick Semansky, File)

His campaign explained that the so-called infrastructure bill “includes Socialist Squad-favorites like amnesty for illegal immigrants and the Green New Deal. Alexandria Ocasio-Cortez declared the package an ‘enormous progressive victory.'”

Demings announced her campaign to try to oust Rubio earlier in the year.

Rubio has previously attacked Demings’ radical track record. He previously tweeted a video of himself saying, “While Congresswoman Demings was on TV calling plans to defund the police ‘thoughtful’ and describing a violent riot as ‘a beautiful sight,’ I was writing and passing the VA Accountability Act to help our veterans.

No matter who wins the democratic Senate primary in #Florida my opponent will be a far left extremist#Sayfie #flpol pic.twitter.com/quy0pMUHS6

He also touted being named the most effective senator and one of the most bipartisan members. At the same time, saying, Demings “is a do-nothing House member with not a single legislative achievement in her time in congress.”