The White House plans to keep Joe Biden away from the cameras on Wednesday as he signs a bill about puppies.

Biden plans to sign the “Puppies Assisting Wounded Servicemembers (PAWS) for Veterans Therapy Act” in the afternoon but the White House has closed the event to the press.

The PAWS bill creates a pilot program for veterans suffering from post-traumatic stress disorder to train service dogs and allows the Department of Veterans Affairs to provide service dogs to veterans with mental health problems.

The president will also sign the “Harlem Hellfighters Congressional Gold Medal Act” on Wednesday, but that event is also closed to the press.

The White House limited press access to the president as he has struggled with criticism while walking away from questions about Afghanistan, turning his back to reporters after delivering a speech, and leaving the room.

White House aides will try to pivot their attention to cybersecurity, as Biden tries to move beyond the debacle in Afghanistan.

Earlier in the day, Biden will receive a closed-door briefing from his advisers about Afghanistan, but that is also closed to the press. 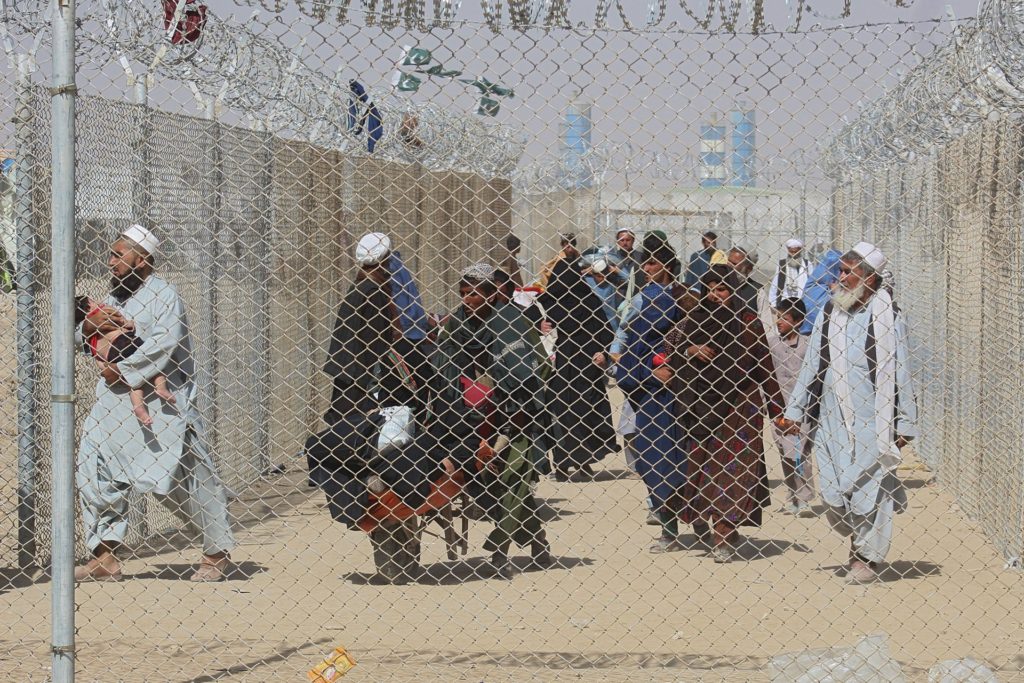 Afghan people walk inside a fenced corridor as they enter Pakistan at the Pakistan-Afghanistan border crossing point in Chaman on August 25, 2021 following the Taliban’s stunning military takeover of Afghanistan. (AFP via Getty Images)

At 2:00 p.m., the White House plans to have Biden address cybersecurity in front of the press at the top of the meeting. It is unclear whether he will take questions.

Biden has pivoted to several other issues facing his administration, despite promising to focus his attention on the mission to evacuate Americans out of Afghanistan.

But on Tuesday, Biden opened his remarks by speaking about his $3.5 trillion entitlement bill, and on Monday he delivered remarks about the coronavirus vaccine and welcomed the WNBA Champions to the White House without mentioning Afghanistan.

The president’s split attention sends the signal he is either unwilling or incapable of focusing on communicating to the American people about the worsening conditions in the country.

On Friday, Biden promised to focus on evacuating every American from the country, even though by Tuesday it was clear that it was unlikely to occur.

Jen Psaki refuses to answer basic questions from Reuters's Steve Holland about when the U.S. will be starting to pull troops out of Afghanistan: "It's a great question, Steve. I just don't want to get into operational details under the purview of the Department of Defense." pic.twitter.com/EYxz6d67Ym

“We’ll use every resource necessary to carry out the mission at hand and bring to safety American citizens and our Afghan allies,” he said. “This is our focus now.”

The White House said last week there were about 11,000 Americans still in Afghanistan, but the Pentagon said Tuesday that only 4,000 had been evacuated.

White House press secretary Jen Psaki admitted that the administration expected some Americans to remain in Afghanistan after the August 31st withdrawal deadline.