The Democrat politicians issued grandiose statements of well-wishes on the anniversary of the 1920 adoption of the 19th Amendment, which gave women the right to vote. At the same time, women and civilians in Afghanistan are quickly being subjugated by the Taliban and bombed by Islamic terrorists amid Biden’s failed withdrawal from the country. Twin suicide bombings on Thursday outside Hamid Karzai International Airport and the Baron Hotel in Kabul, Afghanistan, have killed at least 60 people, including four U.S. Marines, and wounded another 140 on Thursday, according to reports.

The Afghan broadcaster 1TV News published photos of civilians using wheelbarrows to tend to the injured and people fleeing the scene covered in blood. U.S. officials told Reuters at least one of the bombings is believed to be a suicide bombing.

In Pictures: People injured in explosion near Kabul airport pic.twitter.com/WQ8sdjvODG

“My Administration is committed to bearing out the promise of the suffragists, who understood that for women to attain true equality in our country, they must have an equal place at the ballot box,” President Joe Biden’s statement said in part. “As the Vice President has said, the status of women is the status of democracy. This is true abroad, too, where we are committed to strengthening women’s political participation and leadership around the world”: 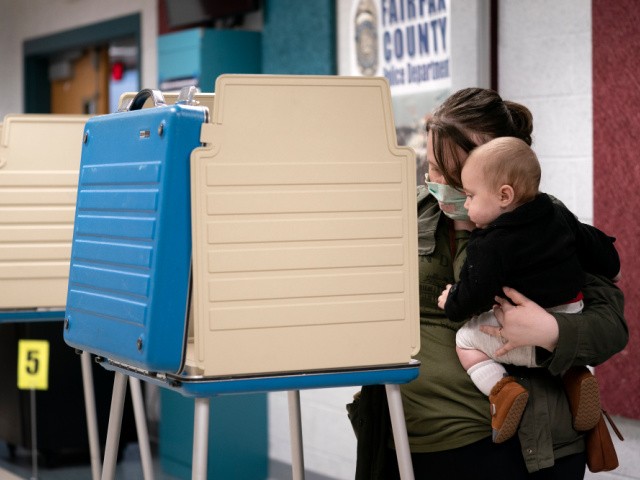 Six month old Henry watches as his mother fills out her ballot at an early voting center at the Mount Vernon Governmental Center on October 31, 2020 in Alexandria, Virginia. Today is the final day of early voting in Virginia, with voters waiting hours in line to cast their ballots ahead of the presidential election on Tuesday (Photo by Stefani Reynolds/Getty Images).

Biden took the opportunity in his statement to slam Republicans’ voter integrity laws as “shameless attacks on voting … burdening a constitutional right with obstacles that overwhelmingly impact voters of color, low-income communities, and people with disabilities.”

As of 2:00 p.m. Thursday, neither Biden nor the State Department had addressed the public about the growing crisis in Kabul. According to reports, the president remained in the Situation Room throughout the morning being briefed on the deadly airport bombings.

Even before the bombings, President Biden has repeatedly dodged questions and even walked away when reporters have pressed him about the Afghanistan withdrawal. Despite pleas from the international community, Biden has remained steadfast in pulling U.S. troops out of Afghanistan by August 31, even though a great number of Americans could be left behind: 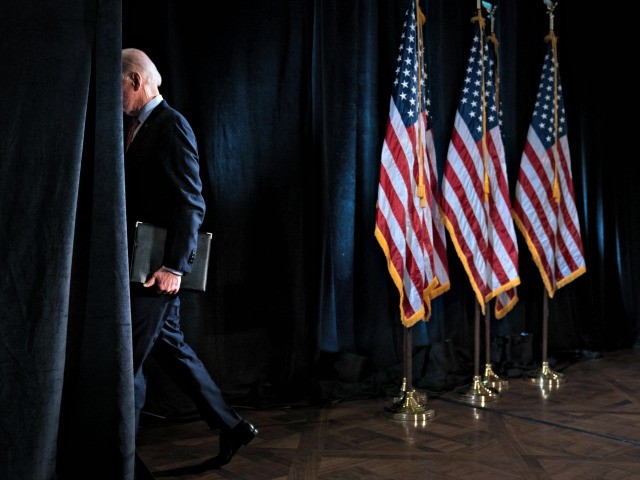 Pelosi, too, tweeted an entire thread about “Women’s Equality Day” and issued a statement, though she has yet to comment on the brutality at the Kabul airport.

“Americans take time to honor these heroes, whose tireless struggle moved our nation closer toward our founding promise of full equality for all,” her statement read in part:

Today, and every day, let us summon the suffragists’ spirit of hope and strive to lift up the voices of women across the nation – because we know this truth: when women succeed, America succeeds. Read my full statement here: https://t.co/KFF2Wm2Jbh

“We also remember the many heroic women of color, too often unsung, who carried on the fight for decades more to overcome discrimination and injustice to win fair access to the ballot for every community,” she continued, joining Biden in harping against Republicans’ efforts to make voting secure. Her statement went on to promote Democrats’ radical, socialist “Build Back Better” agenda.

She further tweeted about childhood hunger after waxing poetic about “Women’s Equality Day,”  again with no reference to the bombings:

Proud to meet with religious leaders & @UniteThePoor yesterday at the Capitol.

I came to Congress for our children. No child should ever go to sleep hungry. Thanks to @POTUS, we have a transformative opportunity to #BuildBackBetter for every family. pic.twitter.com/BpB1l52Jsu

However, Pelosi’s deputy chief of staff, Drew Hammill, slammed House Minority Leader Kevin McCarthy (R-CA) for demanding Pelosi bring Congress back before August 31 for a briefing on the Afghanistan withdrawal:

Right now, American heroes are risking & giving their lives to execute an extraordinarily dangerous evacuation, & the Minority Leader wants to defund the mission & tie the Commander in Chief’s hands in the middle of the most dangerous days of the operation. https://t.co/j94blZVaOK

“Horrific. Our enemies have taken advantage of the chaotic nature of Biden’s withdrawal. Speaker Pelosi must bring Congress back before Aug 31 so we can be briefed thoroughly by the Administration and prohibit the withdrawal of our troops until every American is safely out,” McCarthy tweeted.

In his response, Hammill seemed to acknowledge danger in Kabul; however, he did not explicitly mention the heinous bombings and resulting bloodshed of U.S. citizens, troops, and Afghans.

“Right now, American heroes are risking & giving their lives to execute an extraordinarily dangerous evacuation, & the Minority Leader wants to defund the mission & tie the Commander in Chief’s hands in the middle of the most dangerous days of the operation,” he tweeted in reply.