Stevens, Stevens’ husband, Nessel, and Nessel’s wife stood together maskless for the photo while tables filled with maskless attendees were visible in the background.

Nessel wrote that she officiated the ceremony, stating, “So honored to officiate the wedding of my Congressfriend @HaleyLive. May she and Rob have many wonderful years of love and happiness”:

So honored to officiate the wedding of my Congressfriend ⁦@HaleyLive⁩. May she and Rob have many wonderful years of love and happiness. pic.twitter.com/M0DUsFQmpO

The reception, where Stevens and Nessel are pictured, appears to have taken place at Cherry Creek Golf Club in Shelby Township, an area the Centers for Disease Control and Prevention (CDC) deems as “high transmission” for coronavirus.

The CDC recommends to vaccinated individuals that “to maximize protection from the Delta variant and prevent possibly spreading it to others, wear a mask indoors in public if you are in an area of substantial or high transmission.”

Why, again, are kids in school required to weak masks while all these people don’t have to? #RulesForThee pic.twitter.com/Q9mtP9kNUY

Stevens represents portions of Oakland and Wayne Counties, both of which have gone further than the state and imposed mask mandates for all K–12 school employees and students. Nearby Macomb County, where Shelby Township is located, has not instituted a school mask mandate, but county officials are facing pressure to put one in place.

Stevens’ maskless celebration also comes after she notoriously lost control during a speech about coronavirus on the House floor in March, yelling wildly while wearing pink latex gloves for people to “take the disease seriously” and declaring, “I wear these latex gloves to tell every American to not be afraid!” as she was repeatedly gaveled down and told she was “out of order.”

Michigan, like most states, is experiencing a noticeable increase in new cases, to the point that one of the state’s major newspapers, the Detroit News, published an article this week titled “COVID transmission is so high that all of Michigan should mask up, CDC suggests.”

Another prominent Michigan Democrat, Rep. Rashida Tlaib, sparked outrage last month when she, too, was recorded maskless at a wedding, dancing among a crowd of other maskless individuals:

She’s setting a great example by showing us all that we have nothing to be afraid of. Live your life. pic.twitter.com/LRxOyMFJsD

In perhaps the most high-profile recent case of Democrat masklessness, former President Barack Obama held his 60th birthday party for at least a couple hundred guests at his house in Martha’s Vineyard last month. The party on the small island — also designated as an area of “high transmission” — raised eyebrows for its celebrity-packed invitation list and photos and video that emerged of crowds and maskless attendees, including Obama himself. 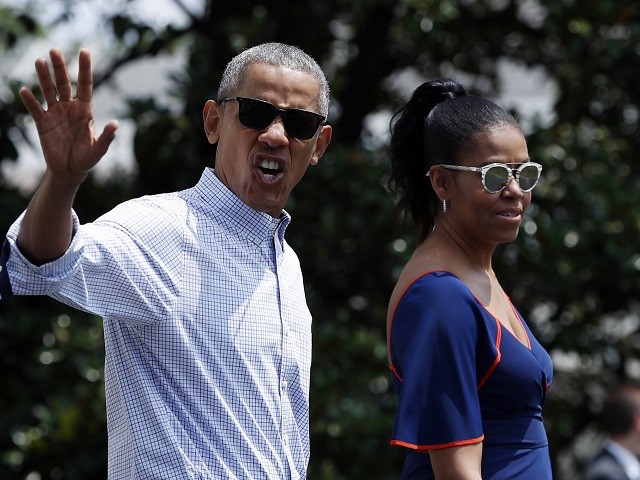 President Barack Obama waves and calls out to media as he and first lady Michelle Obama walk from the White House, August 6, 2016, in Washington, to board Marine One, en route to Martha’s Vineyard for a family vacation. (AP Photo/Carolyn Kaster).

Obama’s party happening while mask mandates were still prevalent across the country in schools, businesses, and elsewhere drew mass criticism, which was further exacerbated when a New York Times reporter appeared on CNN to explain a counterpoint — that Obama’s maskless party was justified because “this is a sophisticated, vaccinated crowd”:

Michigan Gov. Gretchen Whitmer (D), in particular, has faced enormous backlash this year for blatantly defying her own coronavirus mandates.

Whitmer was caught at a dive bar violating her restaurant capacity restrictions in May, and the Democrat governor was also discovered in May to have used campaign funds to charter a private jet to Florida so she could visit her father in March, during a time when she was urging Michiganders to stay home.