A United Nations demand for Australia to accept coal’s days are numbered was comprehensively rejected Monday with a lawmaker in Canberra promising the future of the vital export and job creator will be “decided by the Australian Government, not a foreign body.”

Selwin Hart, the U.N.’s assistant secretary-general and special adviser on climate action, told a leadership forum at the Australian National University the phasing out of coal is a prerequisite to the globalist body’s plan to contain “global warming.”

“If the world does not rapidly phase out coal, climate change will wreak havoc right across the Australian economy: from agriculture to tourism, and right across the services sector,” he said.

Australia’s Resources Minister Keith Pitt shot back by affirming coal would remain a significant contributor to the Australian economy well beyond 2030.

“The future of this crucial industry will be decided by the Australian Government, not a foreign body that wants to shut it down costing thousands of jobs and billions of export dollars for our economy,” Pitt said, according to the Australian Associated Press.

He pointed to three months to July that saw coal exports soar to $12.5 billion – a 26 per cent increase on the previous quarter – as evidence of just how vital the commodity remains to the Australian economy and the jobs that go with it, the AAP report said.

“Coal will continue to generate billions of dollars in royalties and taxes for state and federal governments, and directly employ over 50,000 Australians,” Pitt added, in a direct challenge to climate activists who join the U.N. in demanding Australia cease and desist the practive. 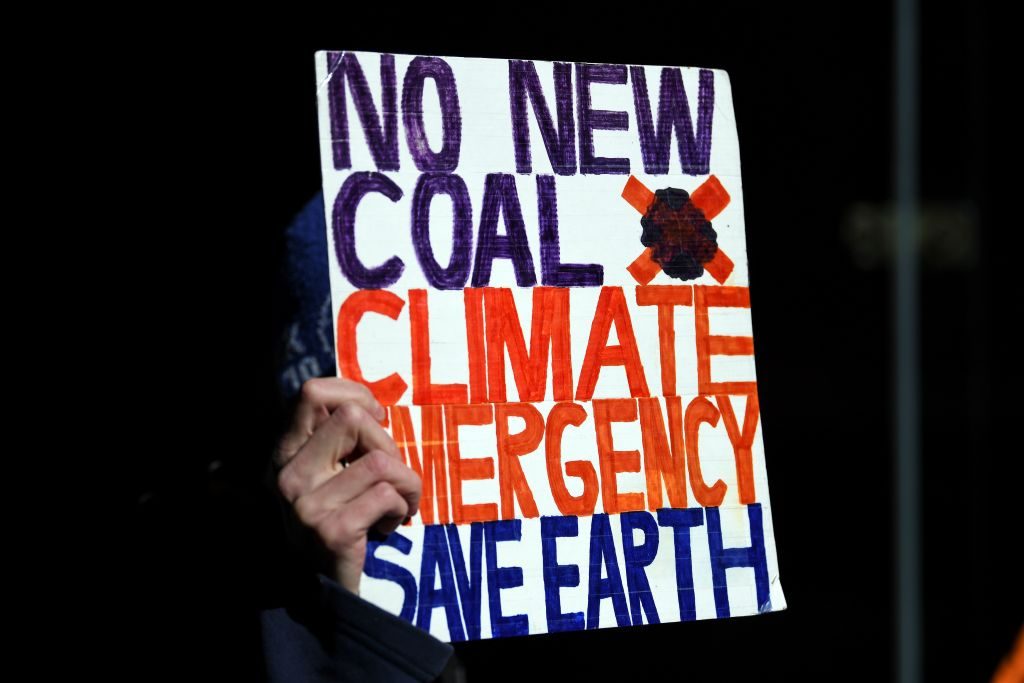 An environmental activist from Extinction Rebellion holds up a placard during a protest against the India-backed Adani coal mine project, outside the GHD engineering office building in Sydney on August 13, 2019. Scores of environment advocates occupied the GHD Sydney offices to urge the engineering consultancy group to reject partnership with Adani. (SAEED KHAN/AFP via Getty Images)

Australia’s rejection of the U.N. was the second time in three years it has stood up to the unelected body on the issue of coal mining.

As Breitbart News reported, in 2018 Australia announced it would continue to mine the resource in direct defiance of the Intergovernmental Panel on Climate Change’s (IPCC) call to phase out coal power by 2050.

Deputy prime minister Michael McCormack said Australia should “absolutely” continue to use and exploit its massive coal reserves, despite the IPCC’s dire warnings the world has just 12 years to avoid climate change catastrophe.

This was a continuation of a policy first made public by former Prime Minister Tony Abbott who in 2015 said coal is the future because it’s good for humanity.

Abbott’s stated belief was fossil fuel – not renewable energy – holds the key to a viable future not just in Australia but across the developing world.

The current conservative coalition government lead by Prime Minister Scott Morrison is sticking to that plan of mining coal as long as there is a world market to receive it.