A Massachusetts public high school principal opened the 2021 school year by apparently feeling the need to declare his racial status and sexual preferences to students in an effort to plug Black Lives Matter propaganda.

As the presentation continued, however, students report that this statement was merely the icebreaker to dive into a larger discussion about identity groups and how they rank in the “oppression hierarchy.”

“There is no reason why students should have to hear a principal basically shame himself in front of them for being a straight white male while he introduces himself,” PDE Director of Outreach Erika Sanzi said. “It isn’t normal for students to come home on the first day of school and say to their parents over dinner, ‘our principal told us today that he’s straight.’”

And indeed, students also report that the school is plastered with leftist propaganda and that “it was hard to find a single classroom in the building that did not have a sign on the door or wall containing one of the following three messages”:

But the indoctrination push does not appear to be surprising, as the school district has made it their mission to embed the ideology into every single aspect of the public school system — from teaching and interacting with one another, to hiring practices and “generally going about the business of school”:

The district’s working definition of equity, proposed by our Superintendent as a starting point for our work, is the basis for the development of curriculum and assessments, the design of learning activities, the purchase of books and materials, hiring staff, the facilitation of meetings, and just generally going about the business of school.

Further, they seek to “prepare all students to be socially and culturally responsive contributors who understand and respect diversity; Act with empathy and courage to ensure equity, access, and an anti-racist culture. Address local and global issues through civic and community engagement.”

“In other words, they are training activists,” PDE explained. “They see themselves as uniquely situated to be societal change agents. They assert that it is their duty — as well as that of their students — to deconstruct the racism that is inherent in the Needham Public Schools (as well as in every aspect of society.)”

The activism training appears to be a community-encompassing effort, as the school system’s website includes increasingly radical “resources” for parents and teachers with which to indoctrinate children.

One such resource is children’s book Not My Idea: A Book About Whiteness (Ordinary Terrible Things) by Anastasia Higginbotham, which depicts a “Contract Binding You to WHITENESS.” The apparent clauses of the contract include “stolen land,” “stolen riches,” and “special favors.”

Indeed, according to this book, “WHITENESS gets: to mess endlessly with the lives of your friends, neighbors, loved ones, and all fellow humans of COLOR,” and, of course, “your soul.” 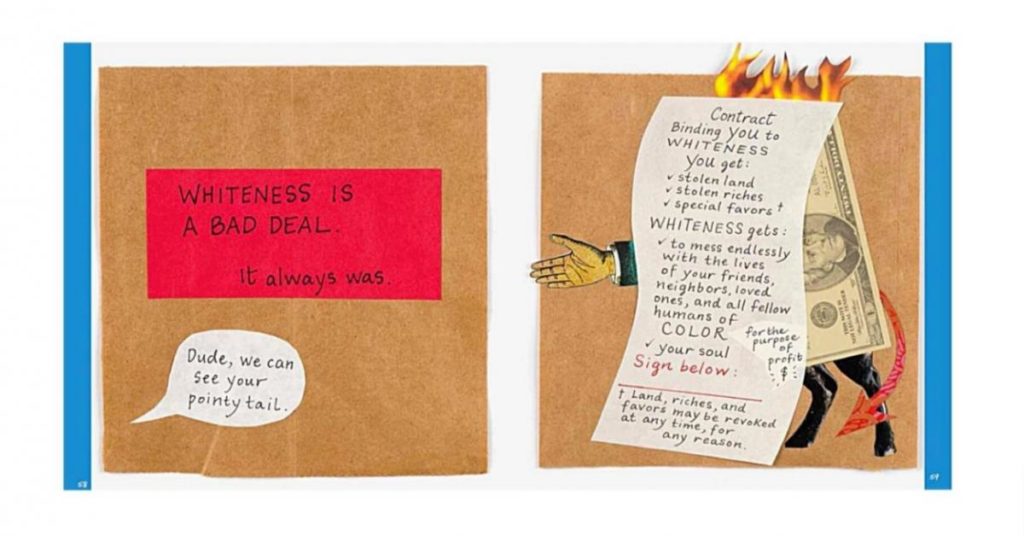 Pages from Not My Idea: A Book About Whiteness (Ordinary Terrible Things) by Anastasia Higginbotham. (Screenshot from Parents Defending Education).

But the effort to indoctrinate children in the Needham school system is even more explicit when looking at the goals of their “Elementary Racial Literacy Curriculum,” which states in part that “In order to help students work toward this competency, explicit racial literacy instruction is required” (emphasis added): The indoctrination starts in kindergarten with a focus on skin colors, but by the third grade, the school district starts teaching “stories of activism.” Teaching about activism is likely not in-and-of-itself negative, but as Breitbart News has previously reported, activist themes are being deployed to further a political movement called “action civics,” which seeks to indoctrinate children from a very young age to mold them into activists, such as those in Black Lives Matter or Antifa.

“The place seems more like a re-education camp than a public high school,” Sanzi said.